Would Book of Mormon Prophets Really Have Written in the "Language of the Egyptians"? Video Highlights Archaeological Evidence

As Nephi introduces himself, he explains that he writes using “the learning of the Jews and the language of the Egyptians,” and Moroni later describes this as “reformed Egyptian” (Mormon 9:32–34).

What might be the “reformed Egyptian” or “the learning of the Jews and the language of the Egyptians” employed by Nephi? Substantial evidence suggests that some ancient Israelites used Egyptian writing with Hebrew influences. Here are seven clues.

First, Israelite texts at the time of Lehi employed numbers and signs from an ancient Egyptian script called hieratic.1 There are over 200 samples of hieratic found in the regions of Israel and Judah.2

Second, [Latter-day Saint] scholars John A. Tvedtnes and Stephen D. Ricks3 collected examples of texts written in a Hebrew-related language being transcribed in hieratic Egyptian dating to 600 years before Lehi.4 They also shared an example of Psalms 20:2–6 written in Aramaic translation using Egyptian characters. This example dates to about 400 years after Lehi’s time.5

Third, archaeologists have also found Egyptian hieratic writing on broken pieces of pots from an Israelite city dating to Lehi’s time. As scholars explain, “the text … is written in a combination of Egyptian hieratic and Hebrew characters but can be read entirely as Egyptian.”6 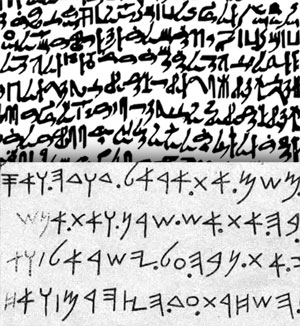 Fourth, “evidence for the commingling of Hebrew and Egyptian scripts was discovered … in the Sinai Peninsula … [dating to] the sixth and seventh centuries B.C.”7

Fifth, a 2012 study by Dr. David Calabro suggests that the use of Egyptian hieratic in ancient Israel “point[s] to the development within Judah of a unified, extensive hieratic tradition,” a tradition which “appears to have been independent of those attested in Egypt during that time.”8

Sixth, Calabro also notes that, “the use of hieratic signs [in some inscriptions] extends beyond simply inserting them as symbols to substitute for Hebrew words,” but rather retain their Egyptian meanings.9 This is true, even as the order of hieratic signs is “contrary to common Egyptian practice … but in accordance with expected Hebrew word order as well as the probable word order in spoken Egyptian.”10

Finally, and most significantly, Calabro explains that one inscription from the Sinai is “the first example of hieratic unilateral signs in [eighth and seventh century BC] Judah.”11 Taken together, the evidence “indicates a widespread presence of scribes educated in this Judahite variety of Egyptian script.”12 Perhaps this is the “learning of the Jews and the language of the Egyptians” referred to by Nephi the scribe/prophet. 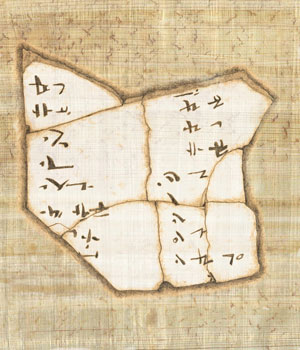 Despite rampant “Egypt-o-mania” in the early nineteenth century, the notion of Jews writing in Egyptian was an unimaginable concept,13 and Joseph Smith was roundly criticized on this point by early Book of Mormon critics.14 In this respect, the Book of Mormon has aged better than its detractors.

Several [Latter-day Saint] researchers have explored the implications these Israelite hieratic texts have for the Book of Mormon. First, John S. Thompson in the 2004 volume Glimpses of Lehi’s Jerusalem, shows that many Egyptian scribes and teachers came to Canaan during the height of the New Kingdom’s power, suggesting that in Lehi’s day, “scribes having a knowledge of Egyptian had existed in the area for quite some time and had maintained a tradition of writing Egyptian.”15

Second, as noted above, Calabro’s analysis pointing to a long-standing scribal tradition teaching a “Judahite variety” of Egyptian writing dovetails nicely with Nephi’s statement about “the learning of the Jews and the language of the Egyptians” (1 Nephi 1:2).

Third, Neal Rappleye has argued, based on Calabro’s findings, that both Nephi’s writing and script were principally Egyptian, with some Hebrew elements, such as Hebrew word order and scribal practices, mixed in.16

As Ricks and Tvedtnes concluded,

The implication is clear: Scribes or students contemporary or nearly contemporary with Lehi were being trained in both Hebrew and Egyptian writing systems. The use of Egyptian script by Lehi’s descendants now becomes not only plausible, but perfectly reasonable in the light of archaeological discoveries made more than a century after Joseph Smith translated the Book of Mormon.17