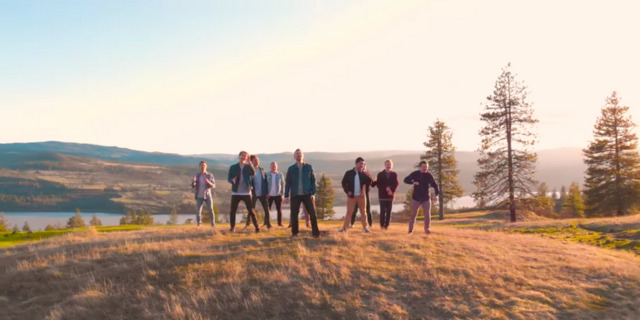 The name Peter Hollens may sound familiar to LDS Living readers. The YouTube star with over 2.5 million subscribers has collaborated with Latter-day Saint artists before, including The Piano Guys, David Archuleta, Lindsey Stirling, and the Tabernacle Choir at Temple Square.

Vocal Point, an a capella group from Brigham Young University, recently released a video with Hollens, singing the song “The Climb.” The group said they wanted to share a message of hope during difficult times, according to a Facebook post.

“The Climb” is one of the songs on BYU Vocal Point’s new album, released on Friday, May 22. The self-titled album features current pop hits, Disney tunes, and inspirational hymns.

Songs included on the new album are:

“The music, the production, the vocals, the energy—it all represents not only a new, fun musical direction for us, but at its core, it also represents the journey Vocal Point has been on the last 29 years,” group director and album producer McKay Crockett said in a press release. “For years Vocal Point has tried to show that you can listen to cool, awesome music while still staying locked on your values. That is what our group is all about, and truthfully, there is no better way to describe this album than that sentiment right there.”

Vocal Point’s all-new, self–titled album is sure to become part of your everyday summer listening playlist. With current pop hits, inspirational hymns, crowd-pleasing Disney tunes, and just about everything in between, there is truly something on this album for everyone. Available now at deseretbook.com.