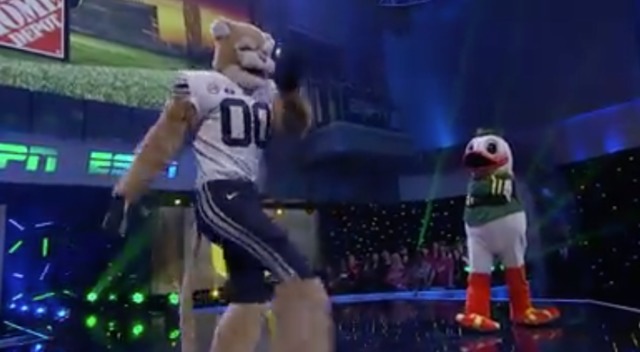 Okay, in case you didn't know, BYU's mascot Cosmo the Cougar has some awesome dance moves. In fact, his performance at the BYU vs. Boise State halftime show earned the attention of Inside Edition, USA Today, and other major news outlets.

Really need to know who this cougar is pic.twitter.com/7gqzdzIVb2 — Jasmine (@JasmineLWatkins) October 10, 2017

But, unfortunately, the University of Oregon Duck tried (and failed) to imitate the awesomeness of Cosmo's halftime show.

And there was no way that kind of challenge could go unanswered. So last week, Cosmo and the Duck battled it out in an epic dance battle live on ESPN's College Football Awards. Needless to say, Cosmo was awesome.

"Ya'll remember when the Oregon Duck challenged me to a dance off? We battled it out live on ESPN last week at the College Football Awards. Who won?" Cosmo wrote on Facebook afterward.