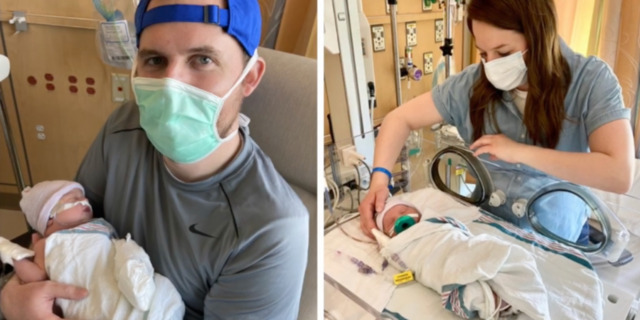 Watch: How having a daughter in the NICU taught one family that ‘God is good in the middle of hard’

The birth of Cameron and Rebecca King’s second daughter isn’t the birth story that most young parents imagine, but it is a story of how the hand of the Lord is always visible, even during hard times.

According to Rebecca’s Instagram, the missionaries asked their family to make a video about their experience of having their daughter Lily in the NICU. Not only was Lily born during the height of the COVID-19 pandemic, but after her birth, she was diagnosed with an intestinal obstruction, so she was immediately transferred to a children’s hospital for a surgery.

After weeks of testing, recovery, and imaging, Lily was finally able to come home. For two weeks, she had a normal life until additional complications took her back to the NICU. And though Lily ended up spending 70 days in the NICU, Cameron testified that they saw miracles throughout their experience.

When an ambulance transported Lily to the children’s hospital, part of the ambulance crew included a member of The Church of Jesus Christ of Latter-day Saints, which brought comfort to the parents.

For Cameron, he noted that his profession is sometimes unforgiving when it comes to personal time, but his coworkers and supervisors stepped in to allow him to be there for Lily.

“I know that was the Lord working behind the scenes to allow me the opportunity to be there and be more present for my family,” Cameron said.

Rebecca also shared that one nurse had a particular impact on the family. Even though she was only Lily’s nurse three out of the 70 days she was in the hospital, she would drop by for visits often.

“Every day she came to visit I just felt God’s love for me and for my sweet little baby and I was grateful,” Rebecca said.

One of the three days Claire was Lily’s nurse happened to be the day Rebecca found out that Lily had cystic fibrosis.

“Even though we were expecting this diagnosis since our older daughter has it, it was still hard to hear and it was during a time when only one of us could be there,” Rebecca said. “So I’m grateful that the Lord allowed me to have a friend in the room—someone that I trusted but also someone who understood what this diagnosis meant for Lily and for our family.”

► You may also like: The story of 2 Latter-day Saint sisters battling cystic fibrosis captured in Devin Supertramp documentary

Rebecca also recalled a conversation with a nurse during Lily’s time in the NICU. The nurse asked Rebecca how she and Cameron had met, which was as youth counselors for a summer church camp. The nurse told Rebecca, “You must be very holy,” to which she quickly responded, “No, we just really love Jesus in our family.”

According to Rebecca, the nurse paused before she said her next statement: “That must be why He’s been so good to you.”

“It took me back a little because I wasn’t expecting her to say that,” Rebecca said. “But I also thought, ‘Why are you talking about God being good as we stand over my baby’s crib? She has tubes and lines, and we don’t know why she’s back,’ and ‘How can you be saying that God is good in this moment?’ But as I think about all that happened and all that will happen, God is good. He loves us and I’m often reminded of many miracles that happened leading up to that day and many days after. It was hard, it was a hard summer. It still is hard, but it was a reminder that God is good in the middle of hard.”

Trials ParenthoodTrials,Parenthood,
Comments and feedback can be sent to feedback@ldsliving.com