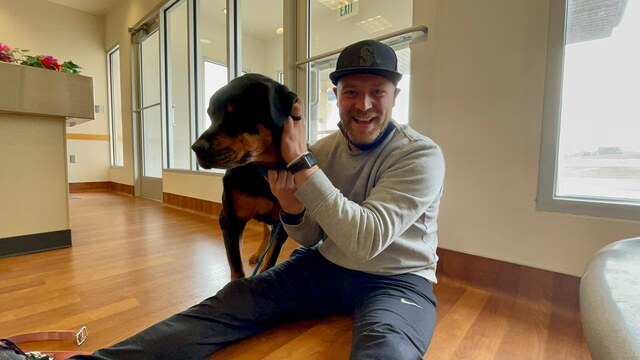 After a few months of praying that his lost rottweiler, Skye, would return home Matthew Ray Banks’s prayers changed.

And then on Monday, after 397 days, the man and his dog were reunited.

“As we drove to the animal shelter all of the emotions from the last year came bursting out of me,” Banks, a husband and father of two, including a baby who was born since Skye went missing, wrote on Facebook. “I was excited, nervous, scared, and so, so happy! But what if she didn’t recognize me? What if she didn’t run right up to me? . . . What if she had been abused or mistreated?”

But as you can see in the video, Skye recognized Banks immediately, and it quickly became clear that Banks’s prayers had been answered. Skye had been well taken care of during her time away. Banks didn’t know details, but she seemed happy and healthy.

On Tuesday, he received a Facebook message from the man who had her during her absence. The man purchased her from someone else who found the dog west of Provo, Utah. He brought her home where she was loved by children and adults. Skye became part of a family that loves the outdoors and lived happily with other dogs.

“He said he had taken her to two vets for her hips, and it was total confirmation that she was happy, taken care of, and loved while on her little vacation,” Banks says.

“It’s a real feel-good story with the video and the reunion, but the more the reader has to fill in with their imagination, the more of a Homeward Bound story it becomes,” Banks says. “She was probably well-cared for and very happy the whole time, minus however long it took her to get picked up in Provo and into the hands of this other family.”