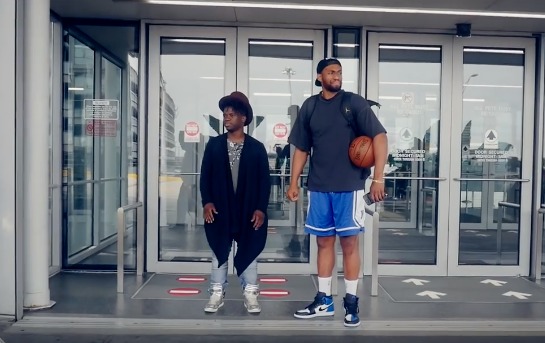 Watch: NBA Player Jabari Parker Stars in New Music Video by Artist Who Sang at the "Be One" Celebration

NBA player Jabari Parker was in attendance at the “Be One” celebration where Oba Bonner performed with his family. And when the two later collaborated to create a music video, it was a result of “musical matchmaking” by their older brothers, Christian Parker and Yahosh Bonner.

It all started with Yahosh mentioned to Christian that his little brother Oba had a song called “Hustlin’” that he thought Jabari might be interested in hearing. The next day, Oba ran into Christian and Christian asked to hear the song.

When Christian heard the song's lyrics, “Go ahead and tell me that I’ll never win, never win but I know that I’ll be here a while,” he loved it, and Jabari agreed to be included in the song's music video.

The rap’s lyrics now seem particularly applicable for Jabari (who is shown in the video wearing a shirt that says “Fear of God,” and a hat that reads “By any means necessary”) as he prepares to appear in his first regular season game as a member of the Chicago Bulls.

In July, Jabari Parker signed a 2-year, $40 million contract with his hometown team, where he was the No. 1 recruit in the United States out of high school. However, Jabari’s experience in the NBA has been plagued by injury and already the Bulls have moved him to the second string. He will have a unique opportunity to prove Oba’s song lyrics true. He will have to continue “hustlin.’”

For Oba, the song is just as applicable to his own life and he hopes it also resonates with other Latter-day youth.

“I’m a rapper and I can still be a returned missionary,” Oba said. “A lot of people might think they have to choose. People might feel like maybe they can’t be themselves but the truth is you can; you can be all of those things and still be a faithful Latter-day Saint. Jabari and I, we share the gospel through what we do, just by living the gospel.”