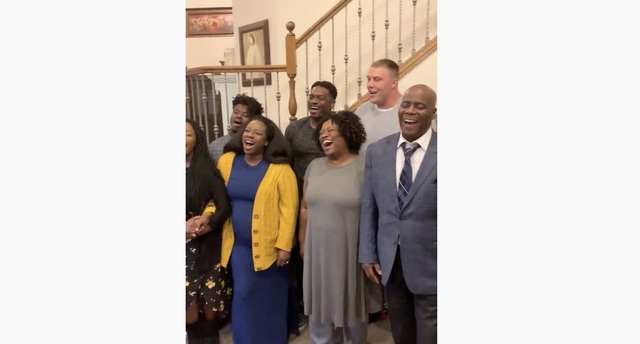 It’s been a tough season in the NFL for Garett Bolles, the left tackle for the Denver Broncos. Throughout this season Bolles has repeatedly found comfort and confidence from an unexpected source: The Bonner Family’s song, “Child of God.” While this is probably the last place you would expect a 6’5” 300-pound offensive tackle to find inspiration, it doesn’t come as a huge surprise to those who are familiar with Bolles’ story.

People around the world have fallen in love this year with Emily Belle Freeman thanks in large part to the Don’t Miss This YouTube series, which has helped families worldwide navigate the new Come Follow Me home-centered church model. Emily frequently references her son, Garett, but some people may not be familiar with the whole story.

To make a long story short, Garett Bolles was a troubled young man who spent time in jail and struggled through high school. One afternoon, Greg Freeman, Emily’s husband, saw Bolles on the side of the road with all of his bags packed and no where to go. Greg picked Garett up and as he drove, he called his wife. Bolles recalls what happened next, “The first thing [Emily] did when she hung up the phone was pray. They still had two daughters at home—one was in high school and one was in ninth grade. And so they were really scared, you know, because I was a lost, troubled teen trying to figure out my way. So she prayed, and the Lord said, ‘Bring him home.’ That’s a big miracle, you know. Not too many people can just take a random kid off the street that had all these struggles.”

You can read more about Bolles’ life leading up to the present-day here.

This season, Bolles has listened to the Bonner family’s “Child of God” recording countless times to and from the practice facility and the football stadium. As his mother frequently speaks with the Bonner family at TOFW events, she asked if they would record the chorus of the song specifically for her son, Garett, after a particularly rough set of games. Garett replied back to that video with one of his own describing how impactful their song has been for him this season. At the end of the video he told them he looked forward to a time when they could all meet in person. On Sunday night it happened. The Bonner family came over for dinner and before they left they invited Garett to sing the song that has become his anthem with them. With Emily’s permission, we are sharing this video as a reminder of God’s love for and awareness of each of us particularly in the hard seasons of our life.