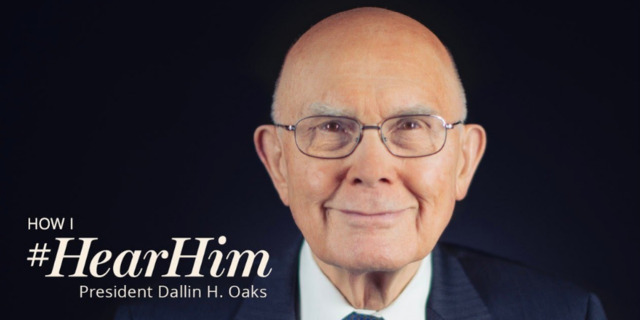 When President Dallin H. Oaks received invitations to speak while serving as a counselor in the Chicago South Stake Presidency, he usually got impressions about what he should speak about.

That wasn’t the case though when he was invited to speak in Aurora, Illinois over 50 years ago. In a new “How I #HearHim” video, President Oaks shares how it wasn’t until he was making the hour drive to Aurora that he received the topic he should speak about.

The topic? Things he had observed in his professional career as a lawyer in Chicago courts, especially young people who were brought into the court for things like shoplifting. He spoke of how serious this crime was and how effective the storekeepers, with the aid of police, were in apprehending young offenders. He shared what happened when they were found guilty of such offenses.

Following his remarks, a young mother approached him and thanked him for his talk through tears. She told him she had a young son who had been involved in shoplifting.

President Oaks recalls her saying, “When I learned that you were going to speak this evening and when I knew about your background, I prayed to the Lord that you would say something that would help our son. You did. . . . He listened to you in a way he has never listened to us and I thank you for hearing the Spirit of the Lord and following it.”

President Oaks concludes the video with an invitation.

“When you get an impression, act upon it, however unusual it seems or however inadequate you feel in following it,” President Oaks says. “Act upon it. There’s a reason. You may not know the reason, but blessings will follow to you and someone else if you hear Him.”

Watch the video on YouTube. President Oaks also shares additional thoughts on the topic in a blog post on ChurchofJesusChrist.org.