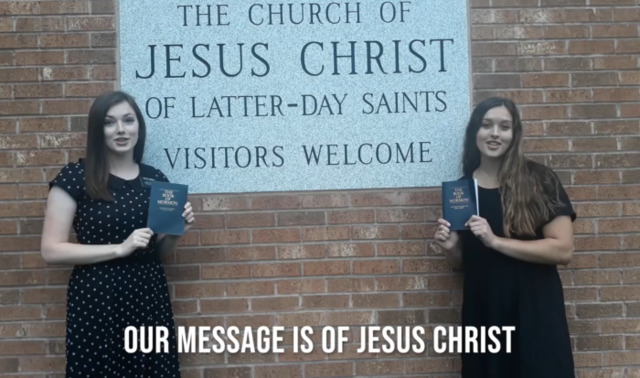 “Sisters, sisters, there were never such devoted sisters. Call us and we’ll bring you close to God, although people sometimes think we’re odd.”

Those are the opening lines of Sister Alexandra Jensen and Sister Cortney Jensen’s clever rendition of “Sisters, Sisters” from the beloved movie classic White Christmas. These missionaries, serving in the North Carolina Charlotte Mission, had been looking for ways to be more creative in their proselyting.

“We both love musicals and are constantly singing around the apartment! One day I was singing ‘Sisters’ and we laughed about it because it applied so well to us. For a while we had been trying to come up with creative Facebook ideas and so we decided to run with it and turn it into a missionary version!” says Sister Alex Jensen.

The sisters shot all the footage themselves and then sent it home to Sister Alex Jensen’s brother for editing.

“My favorite part of filming was being creative because we had to do some interesting setups in order to film ourselves! It was all done with a phone, a wallet for balance, and sometimes a cooler to get the right angle," says Sister Cortney Jensen.

When it was ready, the video was shared on the sisters’ ward Facebook page.

“First, we hope that people will just enjoy it and have a good laugh! But we also want people out there who need a little more happiness in their lives to contact their local missionaries and find the truth that will bring them lasting joy,” says Sister Alex Jensen.

These sister missionaries are right when they sing, “There’s a special spirit in the words we have say.”

Lead image is a screenshot from the video