When you think of Steve Young, you probably picture him as a BYU football player. Or throwing an incredible touchdown pass in the NFL. Or as an ESPN commentator.

The last thing you probably thought of was Steve's epic dance moves.

► You'll Also Like: The Surprising Reason Steve Young Didn't Serve a Mission (and It Has Nothing to Do with Football)

But yesterday that's exactly what Steve did when he sent a video to former Ravens linebacker Ray Lewis for his recent induction into the Hall of Fame.

Having missed Ray's acceptance speech because of his son's Broadway debut, Steve shows off some sweet moves, exactly like Ray's own pre-game dance.

"I want you to know that family first," Steve says in the video. "But short of that, my spirit, all that I am, I want to be there for you, be with you. I really appreciate all the time we've gotten to get to know each other better. So I wanted to congratulate you on going into the hall tonight."

Watch the video below to see Steve's epic dance moves. 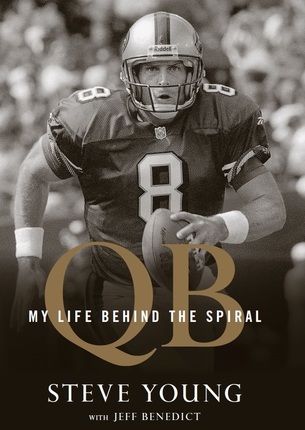 But Young's most impressive victories were personal ones that were won off the field when no one was watching. QB is a remarkably revealing memoir of an athletically gifted Mormon boy with a 4.0 GPA, a photographic memory, and a severe case of childhood separation anxiety. At the same time, Young was absolutely fearless—and unstoppable—whenever he had a ball in his hands.