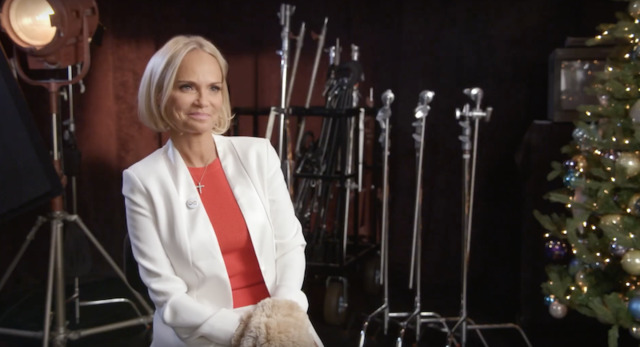 BYUtv and the Tabernacle Choir and Orchestra at Temple Square are celebrating the 2019 Christmas season together this year by airing an exclusive interview with Broadway star Kristin Chenoweth.

The interview is being released in conjunction with Chenoweth’s 2018 performance of “Angels Among Us” with the Tabernacle Choir, which will air on Thursday, December 19 on BYUtv.

“I’m not sure that I can say that I’ve ever been onstage with as many musicians at one time together. And that is the most amazing feeling there is,” Chenoweth said in the interview, noting that previous invitations to sing with the choir had never worked out due to scheduling conflicts.

But when her 50th birthday approached, Chenoweth, who has been a long-time fan of the Tabernacle Choir, decided it was time to cross the item off her bucket list.

“This year I had a big birthday, and I thought, ‘You can’t let this opportunity pass you by,” she continued. “You live on this planet one time—that you know of, anyway, and I just didn’t want to miss it. That’s why I’m here. I wanted to have the experience.”

► You'll also like: Kristin Chenoweth talks about her experience singing with the Tabernacle Choir in this "All In" podcast episode

Chenoweth expressed her conviction that Christmas and music can heal others. And while it may not always be popular to celebrate the birth of Christ, it’s what she believes Christmas is really about.

“What Christmas means to me is family, presents—let’s be real—love and celebrating the birth of Christ,” she said. “It is my truth. So, I’m going to celebrate.”

Can’t get enough of the performance? Get your own copy of “Angels Among Us” at Deseret Book.

The Tabernacle Choir and Orchestra at Temple Square join with superstar singer Kristin Chenoweth for a Christmas performance before a combined audience of 60,000. This show sparkles with excitement as Kristin’s renditions of Christmas classics breathe new life into old favorites. Her stage presence and world-class vocal ability shine in perfect complement to the 360-member choir and full orchestra backing her up. With holiday songs, choruses, dancing, bell-ringing, and seasonal orchestral favorites, this inspiring concert is a celebration of the season unlike any other.