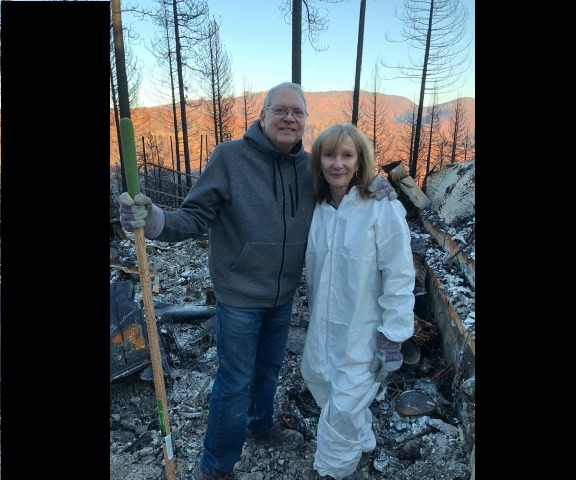 "We Have Not Forgotten You": How Stakes in Washington State Helped California Fire Victims

At first, November 8, 2018, must have felt like a normal morning. Stake seminary supervisor Sandi Anderson of Paradise, California, left home at her normal 6:30 a.m. departure time to attend class. As normal, she visited with the students and teachers after class. Then she received a not so normal text from her husband telling her she’d better come home.

Sandi arrived to see her home pinned between fires in the front lawn and a flaming canyon in the back.

“It was terrifying," Sandi explains. "There was just no time. That morning in seminary the teacher had been talking about journals; I had to leave over 50 years of journals that there was no time to get."

That was the last time Sandi and her husband, Doug, would see the home they had built and lived in for 35 years. When they returned a month later, everything, including their beloved music room, had been burned to the ground. "I thought, ‘I’ll never play the piano again,'” Sandi remembers. 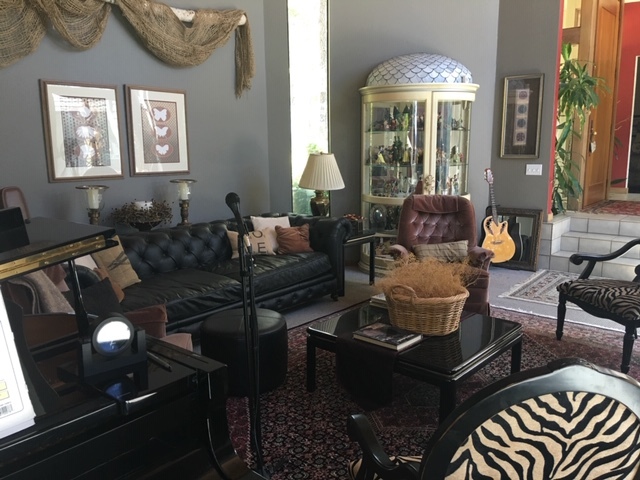 Sandi's music room at her in Paradise, California, before the Camp Fire. 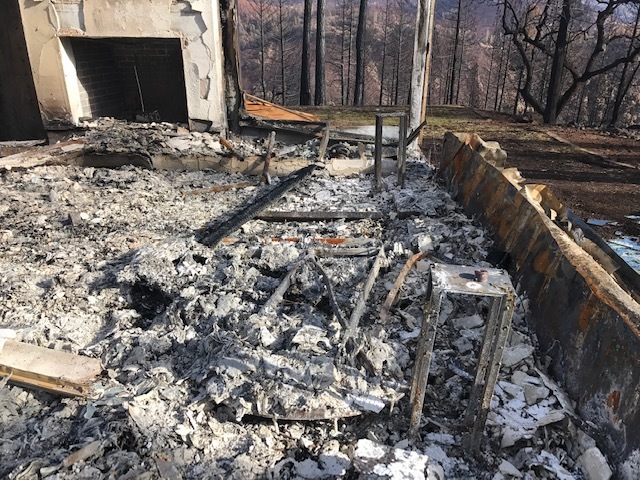 Well, thanks to stakes in Washington state, Sandi was wrong.

Three stakes in northwest Washington joined forces to give fire victims in Paradise, California, something perhaps only Heavenly Father knew they needed: music. In an act of true ministering, more than 250 musical instruments, including 13 pianos, were collected and donated to those who lost everything in the fires late last year.

It all started with Chico, California, stake President John Meyer’s desire to not have those from Paradise forgotten. He reached out to northwest Washington stakes and asked if there was something they could do to help their fellow saints. The request was brought before a stake council meeting for brainstorming. Stake public affairs director Michael Dever explains what happened next:

“The stake Young Women president mentioned musical instruments and it just resonated with everyone," he says. "We asked her about it later and she said, ‘Well, I’m the one that voiced the idea, but it really was Heavenly Father’s idea.'”

Dever also mentioned that the stake president at the council meeting said that he “forgot about all the other ideas once that was on the table. It just really hit home for us.”

Michael and his wife, April, were given the responsibility of heading up the project. When they proposed the idea of musical instruments to President Meyer, he told them he loved the idea because Paradise, California, is a very musical community. The town had recently collected money to build a community center where they could hold local concerts, which gratefully was not affected by the fires. Enthused by the president’s response, the Devers began spreading the word about the project, receiving confirmation that this was Heavenly Father’s will along the way.

“When we were first getting started, I remembered we had this little guitar from our son that we could donate," April says. "I hadn’t seen it in years, so I went and dug around in the attic and pulled it out. I opened the case and the brand on this little beginner guitar says, 'Paradise.' That was really touching and confirmed to me that this is what Heavenly Father wanted us to do."

The Devers and their team would dedicate the next three months to collecting donations.

“More than once I thought, ‘I don’t know if this is going to work.’ When I’d pray about it I would say, ‘Gee, Heavenly Father, is this the right thing? Is this going to work?’ And afterward, I always had that comforting feeling like, ‘Yes. This is good, this is right, it will work.’ And in the end, it did. People came through big time,” Michael says. 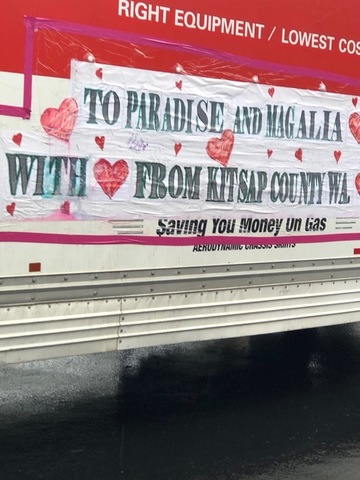 A trailer used to donate musical instruments to those from Paradise, California.

Two of those people were women working at a storage unit—both not members of the Church. They heard about the project and donated a 26-foot U-Haul for the Devers to use in delivering the musical instruments to Paradise. Later, an interfaith council on Bainbridge Island, Washington, donated the proceeds of their annual spring concert to the cause. Multiple news agencies in the area wrote articles and produced videos advertising the project. The results of a community’s efforts are helping to heal hearts.

After receiving a piano to replace the one she lost Sandi says, “It just meant so much to me because I had been so diligent in my piano lessons and practicing, so it’s just been such a comfort. I play it every day. It is just so nice to have that restored to my life.”

The Devers made a special stop to Oregon to deliver the piano to Sandi and Doug. Since losing both their home and Doug’s practice as a cardiologist, they have relocated to live with their son for the time being. From Sandi and Doug’s, the Devers continued their drive down to Paradise. Once there, they personally delivered instruments and set up a station point for people to come and pick them up.

“It was great getting to be able to visit with the people," April says. "I think was part of the project too, letting them tell their stories. I think that helped in their healing to be able to tell it to somebody." 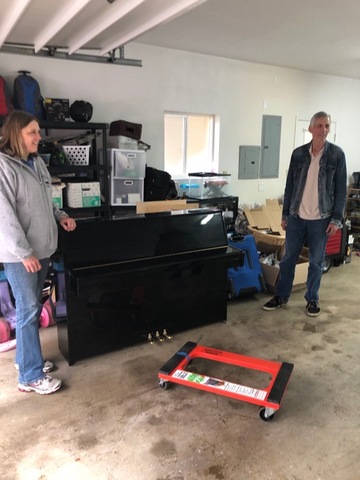 A piano donated to those from Paradise, California.

In addition to individual families, musical instruments were also donated to Paradise Intermediate School and the high school. Heat damage from the fires left half of band director Bob Schofield’s instrument inventory useless. The Devers were able to offer Schofield around 80 instruments as replacements. Receiving these donations was meaningful to Schofield because of the impact it had on his students.

“It was a really happy day when band class was back together," Schofield says. "People don’t always think about the band first, so it was important for my students to know that people care about them."

Schofield’s comment rings true to the foundations of this project: letting brothers and sisters know that they are not forgotten by fellow members or by their Heavenly Father.

“It touches my heart so deeply that someone who had a beautiful piano that they enjoyed would sacrifice it to comfort someone she didn’t even know. It was so Christ-like to recognize that it might bring someone else some comfort and be willing to sacrifice in that way,” Sandi explained through tears. 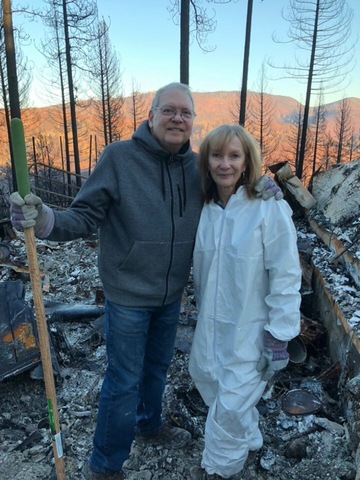 Sandi and Doug in Paradise, California, following the fire.

Like so many others who lost everything to the fires in California, Doug and Sandi are still figuring out what the rest of their lives will look like. But now they go forward with the assurance that they don’t have to do it alone.

“I’d had problems like everyone else in life, but something as painful as this takes time to heal. It’s been wonderful to have this continuous flow of love and support from so many people on so many levels, and the music has been especially comforting,” Sandi says. 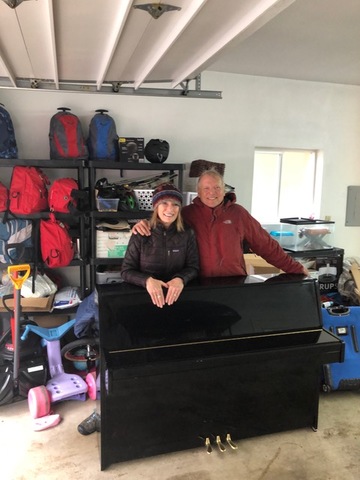