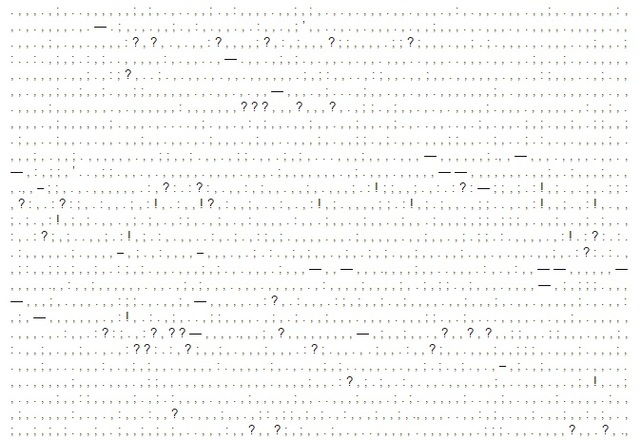 What All of the Punctuation in the Book of Mormon Looks Like, Without Text

Have you ever wondered what the Book of Mormon would look like if you took out all of the words and just left the periods, commas, and other punctuation?

Ardis E. Parshall wondered just that, and what's more, she even set out to copy the punctuation of the entire Book of Mormon. The results are pretty fascinating. She even took the first five chapters in the Book of Mormon and showed how its punctuation changes if it's in English, Samoan, Finnish, or German.

To check out the full series of punctuation found in the Book of Mormon and to find out more about the inspiration behind this project, read Parshall's insights or click the link below.

There is a website featuring posters crafted from great works of literature … sort of. Nicholas Rougeux looks not at the text of literature, but at its punctuation, a focus he calls “Between the Words.” He finds a “visual rhythm” in the punctuation. It’s easy to find that rhythm, noticing that different authors have different styles – some prose is filled with short, to-the-point sentences, as evidenced by a steady flow of full stops and commas. Other authors embrace longer, more complex sentences, spliced by semicolons and filled with parenthetical asides, some of which themselves are divided by complex internal punctuation. The question marks, the exclamation points, all standout, suggesting the mood of the writing in a wordless form.

I wondered what such a treatment of the Book of Mormon would show–-are there differing rhythms between authors? Is there a calm steadiness in parts of the prose? Is choppiness and tension evident in parts?

That is perhaps way too much to ask of a simple series of commas and em-dashes, but what is blogging for if not to delight in the nerdiness of such questions?