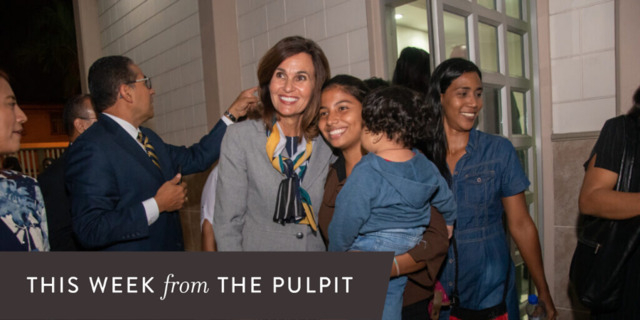 What Church leaders said this week about racial harmony, loneliness, and the rising generation

This week’s messages from the pulpit cover a wide array of topics including racial harmony, learning from loneliness, and helping the rising generation. They all have one thing in common: each stands as a testament that Church leaders strive diligently to be engaged with members worldwide.

Unexpected events and uncomfortable discussions will always have a place on the world stage, but may reading messages from Church leaders this week remind us that loving counsel is also always available for those who seek it.

President Russell M. Nelson joined with three leaders of the National Association for the Advancement of Colored People (NAACP) to call on all Americans to embrace Jesus Christ’s simple but challenging model that can lead to racial peace and harmony. The four leaders coauthored an op-ed that was published on June 8, 2020, on Medium.com.

President Nelson shared the piece on Facebook and said:

“Unitedly we declare that the answers to racism, prejudice, discrimination, and hate will not come from government or law enforcement alone. Solutions will come as we open our hearts to those whose lives are different than our own, as we work to build bonds of genuine friendship, and as we see each other as the brothers and sisters we are—for we are all children of a loving God.

“I invite you to read the article in the link below and consider what you can do to help.”

Interview with Elder Holland on learning from solitude

“It’s an interesting thing to be the only person in the room and then ask yourself whether you like the company,” said Elder Jeffrey R. Holland of the Quorum of the Twelve Apostles in a recent interview with Rabbi Alon Goshen-Gottstein, director of the Elijah Interfaith Institute.

Elder Holland discussed what he has learned about the Savior as the pandemic has caused him to spend more time alone than he has in 40 years.

“I have always been impressed that so regularly, so frequently, Jesus sought solitude," Elder Holland said. "Not to retreat, and not to hide, and not to flee, but He sought solitude to reinforce and to gather strength in order to return.”

For more of Elder Holland’s remarks, read an in-depth summary here. Or watch the full interview below.

Elder Ulisses Soares of the Quorum of the Twelve Apostles was the keynote speaker at the 2020 Seminaries and Institutes of Religion annual training broadcast. To help remind listeners of the impact seminaries and institutes can have, Elder Soares turned the pulpit over to his wife.

Sister Rosanna Soares told her personal story of conversion. She was introduced to the Church at age nine and wanted to be baptized, but her father thought it would be best if she waited and proved that Church membership was what she really wanted.

For the next year, Sister Soares’s father woke her up at 5 a.m. so that she could attend seminary. Sister Soares said that she remembers being very tired some mornings, but now she is grateful for the impact that sacrifice had on her life.

“I know the word of God can make all the difference in our mind, in our attitude, and in the way we see ourselves and others,” said Sister Soares.

Read more about the devotional here or watch the full broadcast here.

In continuation of the Church News series “Women of Covenant,” Sister Lisa L. Harkness, first counselor in the Primary General Presidency, wrote about how the world’s view of power is very different from how God’s power functions. Noting this difference is especially important in understanding women’s role in priesthood power.

Sister Harkness wrote about an experience she had 30 years ago that prompted her to consider more thoughtfully women and priesthood. She was leaving the Church building one Sunday and stopped to introduce herself to a woman she didn’t recognize. This woman had just attended her first Latter-day Saint worship service. After discussing the woman’s experience, Sister Harkness asked her if she had any questions.

“Yes, I do,” she replied. “As a woman, do you feel bad that you don’t have the priesthood power?”

Sister Harkness cannot remember now the details of her response, but that question has caused her reflection in the years since. After a lifetime of learning about God’s plan and the role of covenants in receiving priesthood power, Sister Harkness knows what she would say if or when such a question is posed to her again.

“Most likely, I would tell her that priesthood power refers to God’s power and authority and also the powerful blessings our Heavenly Father wants all of His children to receive and enjoy. As women and men, we allow these blessings to flow into our lives when we enter into—and keep—sacred covenants with God; covenants that are performed by one who has God’s priesthood authority,” wrote Sister Harkness. “And then I would probably ask, “Would you like to learn more?”