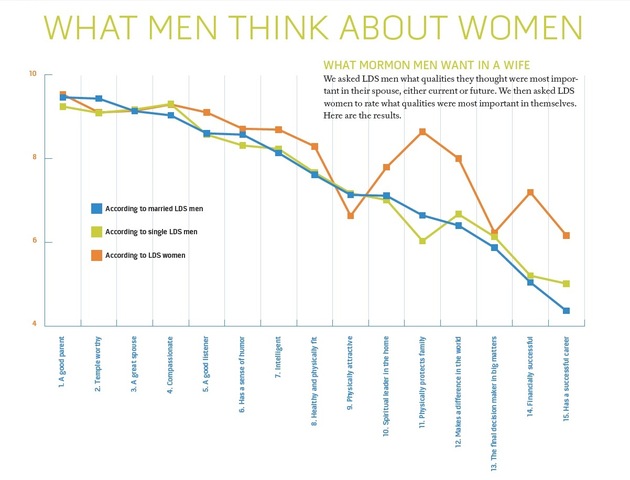 What Do Mormon Men Want in a Wife?

(Click here to see the graph in larger detail.)

So. What do Mormon men want in a wife?

We asked men to rate the importance of each of the following 15 qualities in their spouses--current or future--on a scale from 1 to 10, and from that we were able to create a picture of “the ideal Mormon woman” according to the Mormon man. Here's what they think is most important.

We also asked women what qualities they thought were most important, so we could see how the two genders' opinions compared. Click on the graph above to examine where each characteristic fell in the rankings and where married men, single men, and women differed.

The top three most important attributes--being a good parent and spouse and being temple worthy--are particularly important to the Church, so it’s no surprise they are rated so high on the list. Here are some of the other things we learned, though.

Yes, We Care About Looks

One of the 15 characteristics we asked men and women to rank in importance was physical attraction, and when we averaged the ratings our survey respondents gave to each attribute, “being physically attractive” ended up coming in pretty low on the list—with one exception. When men ranked attributes in men, it came in in 14th place, and when women ranked attributes in women, they put it in 13th place. But while women ranked it in 15th place in men—dead last—men bumped it all the way up to 9th place in women.

That doesn’t surprise Dr. Clint Elison, a sociology professor at BYU-Idaho, at all. He says that’s typical on a national level as well—men just care more about looks than women—but he says women shouldn’t worry too much about it, either. “If it was the number-one thing, then I would say there’s this superficiality—maybe if it’s in the top three or something, [that would mean] all men are looking for supermodels. The fact that it’s not that high, that it’s not one of the main things, is telling. Men certainly are more interested in physical attraction than women are, but I don’t think it’s the only thing they look at.”

That being said, Elison does say most men won’t even consider forming a relationship with a woman they aren’t attracted to.

But again, men aren’t looking for supermodels. What are they looking for? One man put it this way: “I’m usually not looking at weight or fitness or anything like that. . . . To me, it’s a lot more about whether they look like they have enough esteem in themselves to, when they go out, try to make themselves be their best.”

How would you rank these 15 characteristics? What do you think is most important in a spouse?

Make sure you're subscribed to our email to get the other four parts of this series!