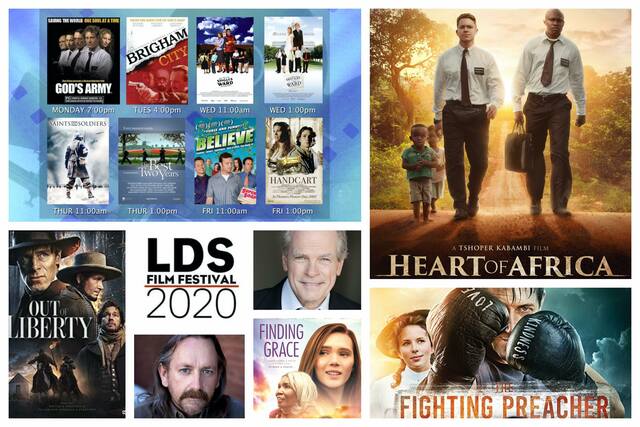 What Families Can Expect at This Week's LDS Film Festival

After 20 years of Latter-day Saint cinema (and 19 years of the festival itself), the annual LDS Film Festival is going stronger than ever, offering a wholly unique and wholesome spin that Sundance, Cannes, and other festivals can’t match. By showcasing the talents of Latter-day Saints and other Christian filmmakers, this weeklong event offers much by way of worry-free entertainment, learning about filmmaking, and rubbing elbows with the artists themselves. It all starts tonight and runs all week at the SCERA theater in Orem, Utah.

As Richard Dutcher’s God’s Army launched the genre 20 years ago, this year’s even offers a retrospective celebration of sorts, screening classic Latter-day Saint films from the past 20 years on the big screen once again with the actors and filmmakers sharing their insights and memories. This, combined with engrossing panels, worthwhile new films, and film competitions make for an event not to be missed by individuals, couples, or families finding themselves along the Wasatch Front this week.

Let’s take a closer look at the schedule:

Kicking off tonight at 7:00 pm, God’s Army is getting a 20th anniversary screening with writer/director Richard Dutcher as the guest of honor. This particular film is free to the public, so get your tickets and bring the family to remember the film that got the ball rolling.

At 4 pm Dutcher’s Brigham City is getting a screening. For those who’ve not seen it, the film is a stunning morality play masquerading as a whodunit, and therefore perfect for fans of last year’s hit movie Knives Out (though this one is more of a dramatic thriller and less of a comedic thriller like that one). 6:30 pm is the delightful family film competition, in which hilarious and touching movies made by families are screened (with awards for winners on Saturday night). At 8:00 pm is the music video festival, with uplifting content from artists like the Bonner Family, Tiffany Alvord, Cedar Breaks, The ZION Youth Symphony and Chorus, The Jets, and more.

11 am offers a screening of the classic comedy The Singles Ward, with the sequel The Singles 2nd Ward screening at 1 pm. 3:30 pm attendees will find the short documentary program and short film program on two different screens. At 6 pm viewers will be treated to Shred of Decency, a feature-length film about compassion during the Battle of the Bulge. At 6:30 is the 48 hour Film Festival, in which exhausted filmmakers screen movies they had two days to produce from concept to finished product (it’s high-stakes and so much fun).

At 8 pm festival-goers can choose between Heart of Africa, about an African Latter-day Saint missionary confronting his tragic past and Out of Liberty, Garret Batty’s fantastic Western about Liberty Jail and Joseph Smith.

At 11 am is a big-screen showing of Saints and Soldiers, followed at 1 pm by The Best Two Years (these are two of the genre’s very best, in my opinion). At 3:30 both the short film and short documentary programs continue.

6 pm sees the premiere screening of Made in Ireland, a beautiful doc about an Irish-American man’s search for his birth mother in Ireland, along with The Evers which is a new film from director Loki Mulholland (a favorite of mine) about a family’s faith and strength when one of their own is assassinated during the Civil Rights movement. At 8 pm is Finding Grace, about a young-woman court-ordered to volunteer at a nursing home and forever changed by her friendship with a cantankerous elderly woman. Also at 8, the film I’m most excited for, Michael Flynn’s Who We Are, the first Latter-day Saint film to wrestle with LGBT issues and Millennial doubt through the lens of faith and compassion.

At 11 am author and screenwriter Jenni James will speak on her craft, a must-attend for aspiring writers. The LDS-made comedy Believe (an overlooked gem) gets a screening then as well. At noon Marshall Moore will present at a panel on what’s new with Utah Film Studios. 1 pm sees a screening of Handcart, the beautiful film from festival director Kels Goodman that paved the way for 17 Miracles and Ephraim’s Rescue. 1 pm also features a panel from actor and filmmaker Michael Flynn (The Best Two Years, Midway to Heaven), discussing his new film Who We Are.

At 2 pm makeup artist Tara Starling will host a panel on her craft and work on the Church’s new Book of Mormon video series. 3 pm sees a two-hour powerhouse panel on the future of distributing Latter-day Saint films with top talent and executives from Living Scriptures, Excel Entertainment, Purdie Distribution, Candlelight Media, and Covenant Communications. 3:30 offers the final films in the short films and short documentary competitions.

6 pm offers Nephites in Europe, exploring the possibility that Nephites spead throughout the world, and Idaho’s Anchorman, highlighting the career of Jay Hildebrant and the evolution of television journalism from the 70’s to now. At 8 pm audiences can choose between T.C. Christensen’s uplifting The Fighting Preacher and Prolonged Exposure, about a therapist who discovers a murderous coverup and fights to protect those in the crosshairs.

10 am offers a second chance to see Shred of Decency, while 10:30 offers the same with Who We Are. At 10 am also, new BYU Special Collections representative will speak on a panel about film preservation and history. At 11 am director Robert Hatch hosts a panel on seeing God as the universe’s greatest filmmaker and learning from Him. At noon production designer Kee Miller will showcase the work on the Church’s new Book of Mormon series and take you behind the scenes of their production.

At 1pm writer/director Richard Dutcher will host a panel on the importance of spirituality in film, while 1 pm also offers a second chance to view Heart of Africa (ditto Prolonged Exposure at 1:30 pm). At 2pm Adam Anderegg of Kaleidoscope Pictures talks their first film, Charly, as well as their partnership ever since with the LDS Motion Picture Studio and BYU-TV. 3 pm kicks off a two-hour panel on breaking into the Christian film market, featuring LDS filmmakers and producers who know what they’re talking about. Out of Liberty gets a replay, then at 4 pm there’s a 30th anniversary screening of the rather excellent BYU-TV production A More Perfect Union, about the signing of the Declaration of Independence. 5:30 is another chance to catch The Fighting Preacher, and 8:00 pm is the can’t-miss awards show, declaring festival champions for feature films, documentaries, music videos, family-made films, and the 48 hour film festival.

All told, there’s nothing like it anywhere else in the world, and it starts today at the SCERA theater in Orem, utah. Get info and tickets to the LDS Film Festival right here.

Jonathan Decker is a licensed marriage and family therapist and clinical director of Your Family Expert. He is the author of 250 Great Movies for Latter-day Families and is known for co-hosting The KJZZ Movie Show, performing with BYU’s Divine Comedy, and starring in CTU: Provo.