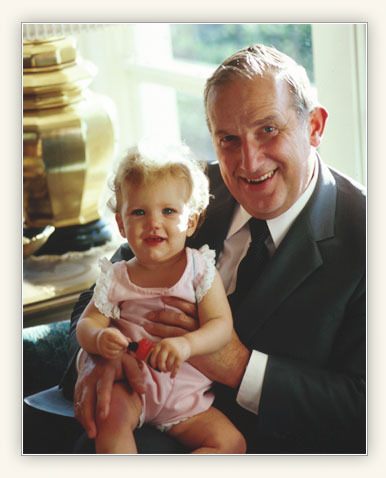 A memory of his father, from "Let Us Be Men":

Years ago, when my brothers and I were boys, our mother had radical cancer surgery. She came very close to death. Much of the tissue in her neck and shoulder had to be removed, and for a long time it was very painful for her to use her right arm.

One morning about a year after the surgery, my father took Mother to an appliance store and asked the manager to show her how to use a machine he had for ironing clothes. The machine was called an Ironrite. It was operated from a chair by pressing pedals with one’s knees to lower a padded roller against a heated metal surface and turn the roller, feeding in shirts, pants, dresses, and other articles. You can see that this would make ironing (of which there was a great deal in our family of five boys) much easier, especially for a woman with limited use of her arm. Mother was shocked when Dad told the manager they would buy the machine and then paid cash for it. Despite my father’s good income as a veterinarian, Mother’s surgery and medications had left them in a difficult financial situation.

On the way home, my mother was upset: “How can we afford it? Where did the money come from? How will we get along now?” Finally Dad told her that he had gone without lunches for nearly a year to save enough money. “Now when you iron,” he said, “you won’t have to stop and go into the bedroom and cry until the pain in your arm stops.” She didn’t know he knew about that. I was not aware of my father’s sacrifice and act of love for my mother at the time, but now that I know, I say to myself, “There is a man.”