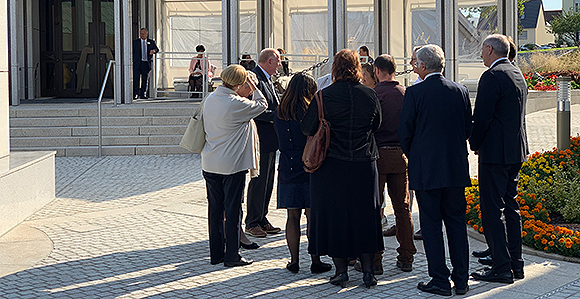 And this same message carried to journalists as they toured the newly remodeled temple, especially after they were asked not to take pictures of the temple's interior.

One week before beginning the public open house tours of the Frankfurt temple, which are expected to draw tens of thousands of people, according to the Church News, Elder Erich W. Kopischke guided journalists and photographers through the temple on a special media tour.

A photojournalist later approached Elder Kopischke and told him that the "peace inside the temple was touching" and another reporter shared similar feelings. And despite not being able to use cameras, many journalists sat in the celestial room, silent except for "the sound of their pens scribbling descriptive notes in quad-ruled notebooks" as they recorded their thoughts and feelings, according to the Church News.

Speaking of this experience, Elder Kopischke said it reminded him of dedicatory prayer of the ancient temple in Jerusalem "in which King Solomon asked God to hear and answer the prayer of the stranger who would come to pray in the temple, so that the whole world would know God’s name and love him (2 Chronicles 6:32–33)."

"If you think about this temple, it is a house of the Lord where a stranger can come and can feel something that they cannot feel at any other place,” Elder Kopischke said, according to the Church News. "We should not underestimate the power of the temple’s influence on those who are not members of the Church."