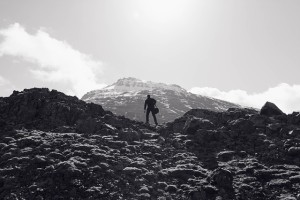 MR says: What does Mozart have to do with rock climbing? Both teach us that impossible walls of adversity will fall over if we challenge them and turn into ramps that will take us higher than we ever thought imaginable.

My buddy invited me to go climbing with him. I had never been, but the concept seemed easy enough: get up a rock wall.

I had no clue what I was actually in for.

As we approached the cliff, I realized that he didn’t have any ropes!

It was at that moment that I learned what ‘free climbing’ was. I wish I would have asked sooner, but still, I was going to make it to the top of that ciff.

We started up a wedge that went up 25 feet…and it just got more challenging from there. I decided to try to find an easier route and in doing so, ended up trying to shimmy around an outcropping of rock.

Read the rest of this story at http://www.bowlofoates.com