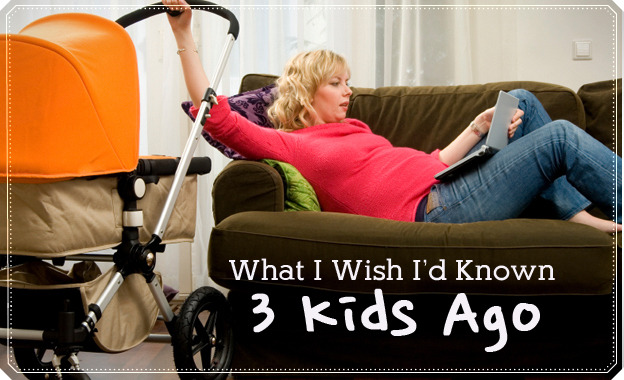 What I Wish I'd Known Three Kids Ago

In my book, Real Moms: Making It Up As We Go, I’m really insistent about NOT giving advice. I think social media has overcorrected modern mothering in this area. The last thing we, as an American parenting society, need is one more article telling us what to do or not do. But I do believe in being reflective and honest when talking about our parenting experience with other mothers. (Clearly by using the term “parenting experience,” I’ve been influenced by this saturated parenting market. Blegh. I’m disgusted with myself.) So, in my quest to be honest, I will reveal a few items (I won’t number them because that would make it seem more like advice, which I’m not suggesting it is) that I wish I myself had known three kids ago (or five) as I raise my pack today.

As a parent, you’re given a lot of graphs, charts, and progress reports with “percentiles” on them that give you data on everything from head circumference to reading levels. I used to give these percentiles a lot of weight, but I now feel that is wasted time. Kids level out. Unless they’re extreme one way or another, it doesn’t matter. It’s nothing to brag or worry about.

Don’t invest in technology too much.

Before I moved to England with two small boys, I thought it would be a good investment to buy a bunch of Disney VHS tapes so we could watch them as we were settling into our new environment. I justified the splurge thinking it would be money well spent because subsequent children could watch them, and I would have these classics for my grandchildren! (Can you imagine?) Yeah. By the time we came home, there were these things called DVDs . . .

I also have the benefit of being what I call one of the “grandmothers of the internet.” I remember parenting before we got on blogs and social media. All things considered, it was easier before all that internet stuff came around (but that’s another article for another time). I wish I could have warned myself a kid or two earlier to just settle down and not spend too much time drafting blog comments in my head or following threads on heated topics that go nowhere.

Kids really come to us as they are.

Nature or nurture? Certainly nurture is important. (I’ve bet most of my adult life on this idea. Believe me, I’m invested. I’m all in.) But I have five kids who now show me that one of the fun parts of parenting is just finding out who these people are as they grow into who they’ve always really been. I don’t create their identities. They show me, and I get to respond.

I’m embarrassed to admit that sometimes I would respond to my kids in public in the way I thought I was supposed to respond to them, or in the way those around me responded to their kids. I don’t do that anymore. Now, sometimes I let things slide, sometimes I respond immediately to something my kids do. It depends on the kid and the situation. So go with your gut. I think that comes with age because you’re more confident when you’re older—and also more tired. Wise and tired.

Don’t over think it.

After a heated discussion with my two oldest boys, who were 12 and 10 at the time (we were discussing something very important then, but it completely escapes me now), my husband and I really came down hard on the boys. We brought our serious faces and stern voices into the room and laid into them in what I thought was a convincing argument (maybe one of our finest). We sent them to bed, thoroughly convincing them we were disappointed in their behavior and said goodnight quickly. After a few minutes, we started to feel bad. Like, maybe we were too hard on them. We worried out loud that we had, maybe, possibly, scarred them forever. I imagined that they were in their beds, crying or talking about what bad parents we were. So, like any good parents, we spied on them and heard Owen say, “Hey Miles,” (Oh great, we worried, here it comes—they’re going to complain about us.) Do you think . . . sharks can do math?”

As this (and so many more) instance with my kids has shown me, no matter if you follow 12 parenting blogs or are simply figuring it out as you go, chance are, your kids are going to turn out just fine.

►Read about other moms making it up as they go!