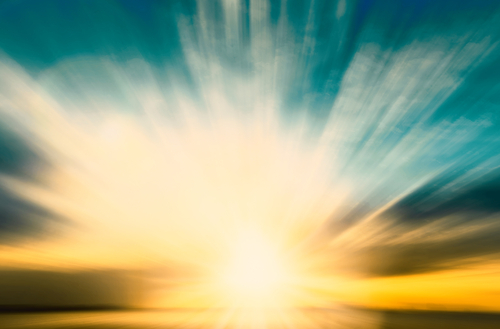 byDuane S. Crowther, excerpted from "Life Everlasting: A Definitive Study of Life After Death" | May 26, 2018

In 1981, a Gallup poll reported, “Nearly one-third of all Americans—or about 47 million people—have had what they call a religious or mystical experience. Of this group, about 15 million report an otherworldly feeling of union with a divine being. They describe such things as special communications from deceased people or divine beings, visions of unusual lights, and out-of-body experiences.”1

Among mature Latter-day Saints, who have learned much about the spirit world from LDS scriptures, that percentage is much higher. For instance, in a recent fireside2 the question was asked, “How many of you have had a near-death or life-after-death experience?” About 85 percent of them raised their hands!

►You’ll also like: What the Spirit World Will Be Like (+ Uplifting Messages For Parents Who've Lost Children)

Much can be learned about dying and “graduating from mortality” from such experiences. Here are portions of multiple reports that show what takes place as one crosses through the veil of death.

What does it feel like when a spirit leaves its body?

Sensations felt when leaving mortality by individuals having near-death or life-after-life experiences have been recorded in numerous instances. For example:

All of a sudden I wasn’t there. I was . . . floating. It was so fast I didn’t realize what had happened. And the pain—it was gone. There was this tremendous relief. It was, I don’t know, just suddenly—WOW!3

I was filled with a feeling of total peace. All the fear I had felt earlier was gone. For the first time in years, my body was totally free of pain. I realized I was dying, and I was happy. I had no desire to go back. I was in transition between the physical world and the spirit world. I was halfway between two planes of existence, and could see both. There was a kind of greenish hue to the physical world where the doctors worked on me. The spirit world was more subdued in color, not bright at all.4

A logging-accident victim recorded these sensations:

Following the accident I felt a great acceleration of speed like I was traveling very fast through the darkness that had now closed in around me. I also noticed that my mind was very alert and crystal clear. I could comprehend anything. I was not constrained by my body. I noticed that the pain was completely gone, and I had no discomfort at all. . . . Everything was okay. Everything was just as it should be.5

►You’ll also like: One Dangerous Problem with Near-Death Experiences and What Role They Should Play in Faith

A 9-year-old girl gave this description:

At first I thought I might have fallen asleep. Then I realized I was looking down at myself in my bed. I could see the entire house, in front of the house, and my mother in the house next door talking to the neighbor. I felt so peaceful and good. Then I was aware I was not alone. People were gathering around me, and welcoming me. I felt surrounded by so much love. They were dressed in white and some of them embraced me. I felt so happy. I didn’t know who the people were, but I felt like I knew them and they knew me.6

Katrina, after an overdose of pills, described what she felt when her spirit left her body:

I first became aware of a blackness, a void. It felt very peaceful. No earthly problem or care followed me there. I was aware I existed, but I felt no pain. For the first time since being a child, I felt free from emotional pain. I knew what was meant when the Lord said that the earth would be cursed for our sakes. This felt so natural in comparison to earth life. I came to the conclusion that our earth experience was the unnatural state and this one, the spiritual state, was the correct state of being.7

A 12-year-old drowning victim gave an interesting description of how her spirit left her body. She said,

I felt like I was going into a quiet, peaceful sleep. Just at that point, I remember feeling my spirit part from my body. It wasn’t sucked out like I had heard other people describe. It was more like osmosis, like my spirit slowly bleeding through my skin. It was very easy.8

What does it feel like to enter the spirit world?

Closely related to what is felt when one’s spirit leaves its body are the vivid emotions felt when entering the spirit world. Here are brief reports of comments recorded from various individuals who have entered spirit realms but then returned to mortality:

There was no worry, no sorrow, no pain; all that was gone. It was like being in perfect understanding, perfect knowledge, perfect love, perfect acceptance.9

To my delight I now found that the emotion of fear was nonexistent. There was absolutely no worry, no concern, no fear. My primary emotion was a feeling of security. I was alone, and yet I know I wasn’t alone. There was something else there that was encompassing me. I felt warm and serene—fear couldn’t exist in that environment. It was a wonderful feeling.10

I will never forget the feeling of being totally enveloped in warmth, . . . it was a feeling of warmth, of love, of compassion—it was a tangible feeling, almost physical in nature. This wonderful feeling enveloped me.11

►You’ll also like: Life After Death: 6 Insights into the Spirit World

The peace I felt was wonderful, a perfect tranquility and warmth, for I was surrounded by an unconditional love. The love was everything that I had hungered for but seemed unavailable to find in life. All the anger, hate, pain, and fear that I had previously felt were removed. Pure love and peace were all around me.12

I never felt so accepted, so loved, and so calm. . . . It was like all the beautiful things in my life intensified a trillion times. It was nothing I have ever seen or felt before. Love doesn’t even begin to describe what I felt, but it’s the only word I know to explain the sensation.13

I had never felt such an overwhelming sense of peace, and acceptance, and total love, . . . there was not judgment. Just mercy and acceptance.14

How close are the deceased to those they love?

Though this is infrequent, some who have died have been permitted to return and strengthen those who are mourning their loss. For instance, a young missionary, drowned en route to his mission, was allowed to return and tell his mourning parents:

Father, you and mother have been greatly worried over my being shipwrecked, but you wouldn’t be grieved at all if you knew the missionary work I have been called to do in the spirit world where I am now laboring, which is more important than if I had gone to South America.15

Larry Tooley shared insights from a guide from the spirit world: "Everyone attends their own funeral. I guess you could say we get the chance to officiate at them. . . . It’s necessary. There are those we left behind that need comforting."16

Larry also told of seeing his deceased mother-in-law at her funeral. “She was moving from person to person. When she came to each family member she stopped, bent forward, and kissed each one on the forehead. It was her way of saying goodbye to the family.” He also reported she was present and watching at the grave site as her grave was being dedicated.

Entry into the spirit world usually is followed by joyful reunions. The prophet Joseph Smith said, “When we depart, we shall hail our mothers, fathers, friends, and all whom we love, who have fallen asleep in Jesus. . . it will be an eternity of felicity.”17

►You’ll also like: What Happens to Loved Ones After Death and What is the Purpose of Death: 5 Comforting Insights from President Nelson

Henry Zollinger recorded that “My mother then introduced me to the heads of five generations of my father’s people, all of whom had believed the gospel.”18

Spirit-world relationships extend even beyond the limits of baptized LDS individuals in Paradise. James W. LeSueur, in his beyond-the-veil experience, observed his brother Frank preaching to an audience of more than 10,000 assembled in a large auditorium. He was informed that “all those you see in this room are your relatives assembled to hear the gospel taught.” He also was shown thousands of other relatives being prepared to receive the gospel message.19

Thousands of accounts, gathered worldwide, provide vivid insights on the wonderful experiences awaiting mankind as each one “graduates” from his or her mortal probation and enters the spirit world. Those accounts include numerous descriptions of plants, buildings, cities, industrious peoples, and numerous activities that are characteristic of the millions of spirits preparing for their resurrections, final judgments, and assignments to heavenly realms.20

I can truly testify that those accounts increase faith, strengthen mortal behavior, nurture eternal hope, and provide profound comfort. There can be no doubt that near-death and life-after-life experiences are a rich source of knowledge concerning the next step in man’s eternal progression.

If you have an interest in what life is like after death, this book will open new horizons of knowledge and understanding of God's plan of eternal progression beyond the veil. Read more in Duane S. Crowther's book Life Everlasting: A Definitive Study of Life After Death, available at amazon.com. Spanish translations of the book are available at deseretbook.com.