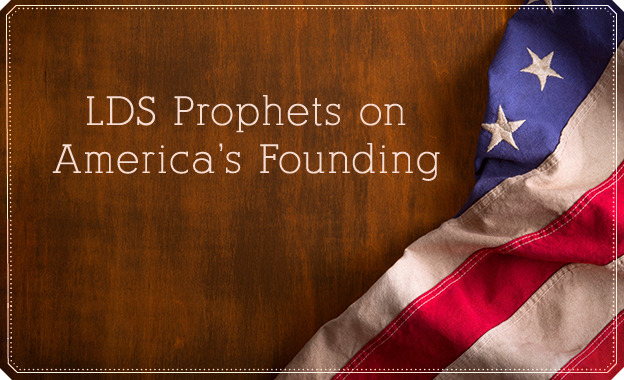 What LDS Prophets Have Said About America's Founding

“The Constitution of the United States is a glorious standard; it is founded in the wisdom of God. It is a heavenly banner; it is to all those who are privileged with the sweets of liberty, like the cooling shades and refreshing waters of a great rock in a thirsty and weary land. It is like a great tree under whose branches men from every clime can be shielded from the burning rays of the sun.”

“The signers of the Declaration of Independence and the framers of the Constitution were inspired from on high to do that work.”

“It was by and through the power of God, that the fathers of this country framed the Declaration of Independence, and also that great palladium of human rights, the Constitution of the United States.”

“Those men who laid the foundation of this American government and signed the Declaration of Independence were the best spirits the God of heaven could find on the face of the earth.   They were choice spirits, not wicked men.   General Washington and all the men that labored for the purpose were inspired of the Lord.”

“We trace the hand of the Almighty in framing the constitution of our land, and believe that the Lord raised up men purposely for the accomplishment of this object, raised them up and inspired them to frame the Constitution of the United States.”

“I hope with all my soul that the members of the Church of Jesus Christ of Latter-day Saints will be loyal in their very hearts and souls, to the principles of the Constitution of our country. From them we have derived the liberty that we enjoy. They have been the means of guaranteeing to the foreigner that has come within our gates, and to the native born, and to all the citizens of this country, the freedom and liberty that we possess. We cannot go back upon such principles as these.”

“From my childhood days I have understood that we believe absolutely that the Constitution of our country was an inspired instrument, and that God directed those who created it and those who defended the independence of this nation. In other words, that He fought with Washington and others in the Revolutionary War.”

“You know, and I know, that the Ten Commandments contain the will of our Heavenly Father, and I am grateful, not only for the civil laws but also for the laws God has given us. I feel bound to conform my life to the teachings of the Ten Commandments. I feel equally bound to sustain the Constitution of the United States which came from the same source as the Ten Commandments. Unless the people of this great nation can realize these things and repent, they may forfeit the liberty that they now enjoy, and the blessings that are so multiplied among us.”

“Next to being one in worshiping God there is nothing in this world upon which this Church should be more united than in upholding and defending the Constitution of the United States.”

”Our government came into existence through divine guidance.   The inspiration of the Lord rested upon the patriots who established it, and inspired them through the dark days of their struggle for independence and through the critical period which followed that struggle when they framed our glorious Constitution which guarantees to all the self-evident truth proclaimed in the Declaration of Independence, “that all men are created equal: that they are endowed by their Creator with certain inalienable rights: that among these rights are life, liberty, and the pursuit of happiness.”

“It was to accomplish this lofty purpose basic to all liberty that God “established the Constitution of this land by the hands of wise men whom (he) raised up unto this very purpose” (D&C 101:77–80). Contained within the principles of that great heaven-inspired document is the message of this Church to the world in this fateful hour. Except the spirit of the Gospel of Jesus Christ and principles contained within the Constitution of the United States are inherent in world plans now being formulated, they are but building on sand and the Lord is not in that building.”

“This restoration was preceded by a long period of preparation. The Pilgrims and other Europeans were inspired to find this American haven of refuge and thus people this land with honest and God-fearing citizens. Washington and his fellows were inspired to revolt from England and bring political liberty to this land, along with the more valuable treasure of religious liberty so that the soil might be prepared for the seed of the truth when it should again be sown”

“Yes, the early leaders and the people generally of this great nation recognized the necessity for spiritual support if the nation was to endure. They gave humble expression to this conviction in the inscription, ‘In God We Trust’ found on the coins of the land. The holy Sabbath was a day of rest and worship. Religious devotion in the home was a common practice. Family prayer, reading of the holy scriptures, and the singing of hymns were an everyday occurrence. There is every evidence that ‘our fathers looked to God for their direction.’

“In framing that great document which Gladstone declared ‘the most wonderful work ever struck off at a given time by the brain and purpose of man,’ our early leaders our early leaders called upon a kind Providence. Later the product of the constitutional convention was referred to as our God-inspired Constitution. They had incorporated within its sacred paragraphs eternal principles supported by the holy scriptures with which they were familiar. It was established ‘for the rights and protection of all flesh according to just and holy principles.’

“Christianity in its fullness and truth has been restored to the earth by direct revelation. The restoration of the Gospel of Jesus Christ is the most significant fact since the resurrection of Jesus Christ. What was restored? In a very real sense, the true Law of the Harvest was restored – the law of justice, the law of mercy, the law of love. It was restored in a free country under the influence of a God-inspired Constitution which created a climate of freedom, opportunity and prosperity. The basic virtues of thrift, self-reliance, independence, enterprise, diligence, integrity, morality, faith in God and in His Son, Jesus Christ, were the principles upon which this, the greatest nation in the world, has been built. We must not sell this priceless, divine heritage which was largely paid for by the blood of patriots and prophets for a mess of pottage, for a counterfeit, a false doctrine parading under the cloak of love and compassion, of humanitarianism, even of Christianity.”

“Both the Declaration of Independence and the Constitution of the United States were brought forth under the inspiration of God to establish and maintain the freedom of the people of this nation. I said it, and I believe it to be true. There is a miracle in its establishment that cannot be explained in any other way.”

“Let us pause and reflect upon the many blessings we as Americans have received from our Constitution and the debt of gratitude we owe those heroic signers. As we do so, we might also recognize that freedom is not free. Sacrifice has been required to protect and to preserve the very freedoms we cherish.”