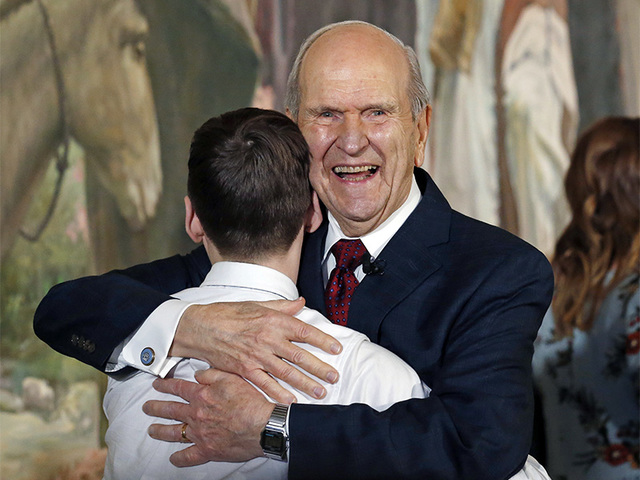 What NBC, NPR + Other Major News Outlets Are Saying About the New First Presidency

On Tuesday, our new prophet, President Russell M. Nelson, announced the Church's new First Presidency, an event noted by news outlets across the nation. Here is a glimpse into what these outlets are saying about our new Church leadership:

The new president of the Mormon church says there’s room in the religion for everyone no matter what challenges they face and regardless of whether they’ve never joined or have strayed from the faith.

Russell M. Nelson spoke Tuesday (Jan. 16) during a news conference in Salt Lake City after the widely anticipated announcement that he had been chosen to become the 17th president of The Church of Jesus Christ of Latter-day Saints. Nelson succeeds Thomas S. Monson, who died Jan. 2.

Asked about his approach to LGBT issues, Nelson said that God loves his children regardless of “their challenges.”

Dallin H. Oaks, one of two men chosen by Nelson to be his counselors, added that leaders have the responsibility to teach love but also commandments from God.

[Nelson]  is a world-renowned cardiothoracic surgeon who performed heart surgeries from the 1950s to the mid-1980s, according to the Salt Lake Tribune.

He also served in the Korean War as a U.S. Army medic and was stationed in Korea, Japan and the Walter Reed Army Medical Center in Washington, D.C., the LDS states on its website.

Born September 9, 1924, Nelson and his late wife, Dantzel White, had 10 children, including nine daughters and one son, as well as 57 grandchildren and more than 100 great-grandchildren. Dantzel passed away in February 2005, and in April 2006, Nelson married Wendy Watson.

The LDS says Nelson is fluent in Mandarin and has visited as many as 31 countries in just five years, including trips to help build the Mormon church in Hungary, Czechoslovakia, Romania, Bulgaria, Russia, Ukraine and Estonia. . . .

Speaking to reporters at a news conference, Nelson characterized his selection as “sacred and humbling.” . . .

The president of the Mormon church is believed to be a living prophet able to receive divine revelations from God. Succession is based strictly on seniority. Nelson was the longest-serving member of a church body known as the Quorum of the Twelve Apostles, which meant that he was next in line for the role of president. He became part of the Quorum in 1984.

During the broadcast, Nelson announced that he had chosen two counselors to stand beside him in the First Presidency, the church’s highest governing body. As First Counselor, he chose Dallin H. Oaks, who has long been part of the Quorum of the Twelve Apostles and is next in line to be president. As Second Counselor, Nelson chose Henry B. Eyring, who served in the First Presidency under Monson.

The Church of Jesus Christ of Latter-day Saints, better known as the Mormon church, has named 93-year-old Russell M. Nelson as its new president.

"I express my deep love for you — love that has grown over decades of meeting you, worshipping with you and serving you," Nelson, a former surgeon and longtime church leader, said in a live video announcement Tuesday morning from the Salt Lake Temple in Utah. . . .

"Two days ago, my brethren of the Quorum of the Twelve Apostles laid hands upon my head, ordained me, set me apart as president of the church. It was a sacred and humbling experience," Nelson said at a news conference. "We live in the most vibrant era in the history of the world." . . .

The Mormon church is led by white men from the U.S., and Nelson stated that "we'll live to see the day when there are other flavors in the mix." He added that the current leadership is a product of who was called by the Lord. "Not one of us asked to be here." He added that the church depends on women's voices and participation.

Nelson is the second-oldest man to assume leadership of The Church of Jesus Christ of Latter-day Saints, which is based in Utah and counts nearly 16 million members worldwide. He will oversee the religious and business interests of the faith in collaboration with two top counselors and members of the Quorum, one of the faith's top governing bodies. . . .

Born in Salt Lake City in 1924, Nelson converted to Mormonism at the age of 16. He was a doctor by 22. He served a two-year Army medical tour of duty during the Korean War before resuming a medical career that included being director of thoracic surgery residency at the University of Utah. . . .

His past speeches offer some clue to how he will lead.

In October 2015, during a period of intense discussion about the role of women, Nelson spoke of women's unique contributions.

"My dear sisters, whatever your calling, whatever your circumstances, we need your impressions, your insights, and your inspiration," Nelson said. "Married or single, you sisters possess distinctive capabilities and special intuition you have received as gifts from God. We brethren cannot duplicate your unique influence."

Nelson, 93 — a world-renowned heart surgeon who was president of the Society for Vascular Surgery and of the Utah State Medical Association before he started moving up in the church's leadership — signaled a stay-the-course philosophy when he was announced Tuesday as the successor to President Thomas S. Monson, who died Jan. 2 at age 90.

"If you have stepped off the path, may I advise you with all the hope in my heart to please come back," Nelson said in an address broadcast from Salt Lake City, the church's headquarters. "Whatever your concerns, whatever your challenges, there's a place for you in this, the Lord's church."

Mr. Nelson will lead the church, supposedly through divine revelation from God, along with two counselors and members of the Quorum. . . .

Mr. Nelson will share responsibility for the faith’s religious and business interests with his two top counselors and members of the Quorum of the Twelve Apostles.

A new president usually chooses his two counselors them from the Quorum, which is modeled after Jesus Christ’s apostles.

Mr. Nelson kept Henry B Eyring as a counselor and chose Dallin H Oaks as the second.

Being counselors does not put them ahead in line to become the next president, who is always the longest-tenured member. However, Mr. Oaks happens to be next in line. The 85-year-old is a former Utah Supreme Court justice who joined the Quorum in May 1984, one month after Mr. Nelson.