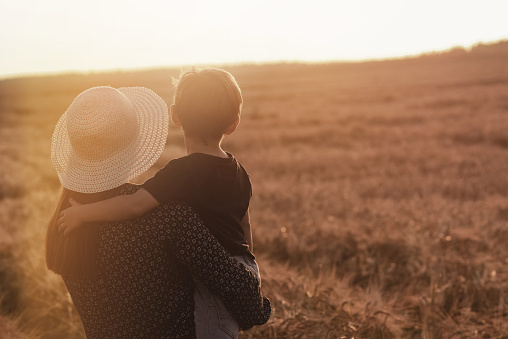 When KaRyn saw a convert from her mission, Catherine, behind a wall of glass in an orange jumpsuit, she wept.

"There was my Catherine—my dear friend, my sister in the gospel—in a prison outfit," This Is the Gospel podcast host KaRyn says in a new episode.

In what some could consider a low point for Catherine, God brought a Latter-day Saint missionary to her aid in an unusual way.

Catherine had been the ideal investigator, someone who was ready for the gospel. "From the minute she said her first prayer to the day she was baptized, I had honestly never met someone who was more excited to learn about prophets and to be a member of The Church of Jesus Christ of Latter-day Saints," KaRyn says.

And after KaRyn was transferred out of the area, she kept in touch with Catherine through letters. Letter after letter, they discussed what was going on in their lives. And then one day KaRyn received a letter from Catherine with a stamp from a correctional facility in a city KaRyn didn't recognize.

Catherine was in jail.

The exact circumstances of Catherine's incarceration were fuzzy, KaRyn says. But Catherine wrote it had to do with something that happened a long time ago and that she would most likely be in jail for a while.

A couple of weeks after receiving the letter, KaRyn was at a sisters' conference near the correctional facility and asked her mission president if she and her companion could visit Catherine. He said yes.

"I remember driving up to that facility and parking the car and going through the metal detectors," KaRyn says. "And when we got in there, there was a big wall of glass. And it had little holes poked through it so you could talk at about mouth level."

And there, among a line of women in bright orange jumpsuits standing on the other side of the wall, was Catherine.

As the two cried together and began talking about Catherine's life, KaRyn asked the question: What was going to happen to Catherine's 6-year-old son, Cody?

At the time, Cody was in the care of Catherine's roommate, but that situation wouldn't last and Catherine told KaRyn that Cody would eventually be placed in foster care.

Foster care. The words broke KaRyn's heart. The sweet, smart, little boy she knew was facing one of life's roulettes, and he had absolutely no control over it, no way to prepare for it.

"I said, 'Well, what are you going to do?'" KaRyn remembers asking Catherine. "And without skipping a beat, she said 'Well, I was hoping you would take him.'"

KaRyn, a Latter-day Saint missionary. KaRyn, a single woman in her early 20s with no previous experience of raising a child. KaRyn, who would have to live with her parents when she returned home from her mission.

Everything seemed to be screaming this was crazy, to just say "no" and walk away.

KaRyn opened her mouth and said, "I will."

Both women sat in shock. Neither had expected that answer, but it was the right answer. "As the words came out of my mouth, I felt a thousand thunderbolts of lightning moving through me," KaRyn says. "And in that moment, I knew it was the exact right thing for me to do, even though it made absolutely no sense at all."

Catherine, who knew that KaRyn didn't have a place of her own, asked: "What will your mother say?"

"And I looked right at her and I said, 'Catherine, I know exactly what my mother will say.'"

Listen to the full podcast below to hear KaRyn's mother's response or read the full transcript here.