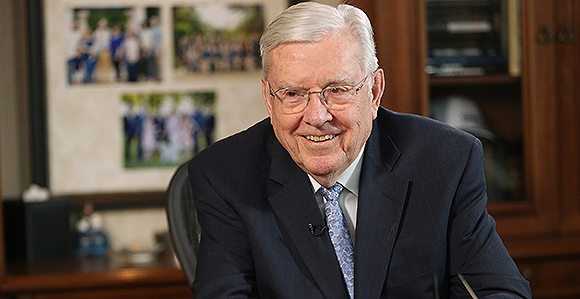 In 1969 I traveled to Mexico with three business associates. All three were outstanding businessmen, and each had amassed a considerable fortune; in fact, one was widely reported to be one of the richest men in the entire world. The four of us sat together in the lavish executive compartment of a private jet—a billionaire, two millionaires.

As we flew to Mexico these three wealthy executives discussed multimillion dollar business deals like other people discuss last night's ball game or recent movies they've seen. To tell you the truth, I was intimidated—especially when the billionaire turned to me and asked, "So tell me, Ballard, what exactly is it that you do?"

"After listening to the three of you talk," I said, "I guess I don't do very much at all."

They chuckled at my comment. But none of them seemed to disagree with my assessment of the situation.

As our conversation continued, however, it became clear that, although these were men of good will who had done many good things in the world with their wealth, the most important thing in life to the billionaire was to accumulate more and more money, which appeared to be the source of his power and prestige. Wealth seemed to be what made him happy and proud. As far as I could tell, it was his passion, his obsession, his very reason for being. As he discussed his international financial empire and impressive array of worldly possessions, I sensed that beneath that collection of materialism was a foundation of unhappiness that comes from spiritual deprivation. The billionaire did not speak joyfully of family or friends. He seemed not to know much of real peace or contentment. The gospel of Jesus Christ was not part of his life. In a contemplative moment he said to me, "I'm not sure there is such a thing as life after one dies. But if there is, I wonder if any of this will matter much."

Obviously, neither option—death as the ultimate end of existence or life beyond the grave without worldly acclaim or accumulation—gave him much comfort.

Happiness Is the Greatest of All Riches

When I returned home a couple of days later my wife, Barbara, met me at the airport and we returned to our comfortable home in Salt Lake City. When she asked me how I had enjoyed my sampling of life in the fastest of all financial fast lanes, I could only sigh and respond, "Honey, we may not have much money or the other things that some people think are so important. But I have a feeling that of the four men on that plane, I was the happiest and, in a way, the richest. I have blessings that money simply cannot buy. And I have the satisfaction of knowing that the things that are most important to me—you, our family, and my love of God—can endure forever."

I couldn't help but think of the Savior's words to His disciples when He said, "Lay not up for yourselves treasures upon the earth, where moth and rust doth corrupt, and where thieves break through and steal:

"But lay up for yourselves treasures in heaven, where neither moth nor rust doth corrupt, and where thieves do not break through nor steal:

Finding Peace in a Troubled World

The treasure we're talking about is a feeling of comfort, peace, and eternal security. Because I know that I'm part of a holy plan designed by a Heavenly Father who loves all of His children equally and who wants them all to achieve eternal success, there's no pressure on me to compete with anyone for worldly acclaim and accomplishment. Please don't misunderstand: There are many good men and women in the Church of considerable means who know and live Heavenly Father's eternal plan. Their contributions to God's kingdom, both spiritually and financially, have been significant. We all want to provide the necessities of life for our families and do the best we can with the talents God has given us. But when considered from the unique perspective of eternity, fame and popularity aren't nearly as important as loving and being loved; status doesn't mean much when compared to service; and acquiring spiritual knowledge is infinitely more meaningful than acquiring an excess of wealth.

It's that perspective and the attendant spiritual and emotional tranquillity that are among the positive fruits of knowing—really knowing and living the gospel of Jesus Christ. It clarifies the relationship between people and their God and gives meaning and purpose to every individual life. Far more than being just another way of worshiping, it is a way of life. It guides every decision and underscores every relationship, including one's relationship with oneself. You see, you can never look at yourself in the same way if you know that you are a child of God, and that He knows you, loves you, and cares about you. And you can never look at others dispassionately if you know that they are your eternal brothers and sisters who, like you, are here on earth trying to learn and grow through mortal experiences, both good and bad.

In a world teeming with uncertainty and frustration, such understanding brings a peace of mind that is a delicious gospel fruit, indeed. What comfort and security come from knowing that we have a purpose for being! What a blessing to have the solid anchor of specific values by which to live! How exciting to understand our ultimate, divine potential! How reassuring to realize there is a source of power much greater than our own, which can be accessed through personal faith and prayer and through the righteous exercise of God's priesthood authority! And how encouraging to know that there is a source of strength that can help us cope with daily trials and find peace in a troubled, turbulent world! 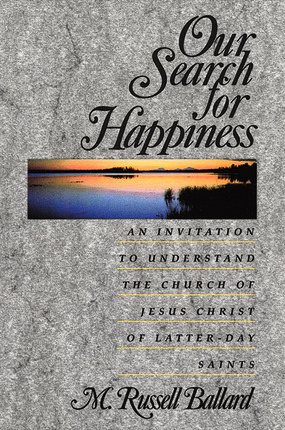 President M. Russell Ballard explains the Church and LDS beliefs in a clear and inoffensive way. Elder Ballard discusses the Apostasy, the need for the Restoration, the Book of Mormon, the priesthood, the plan of salvation, the Articles of Faith, the Word of Wisdom, temples, missionary work, and benefits of living the gospel. Through personal experiences, he reveals how the gospel has benefited him and concludes by bearing his testimony.

You can feel confident in giving this book to nonmember — or less active — friends and family.