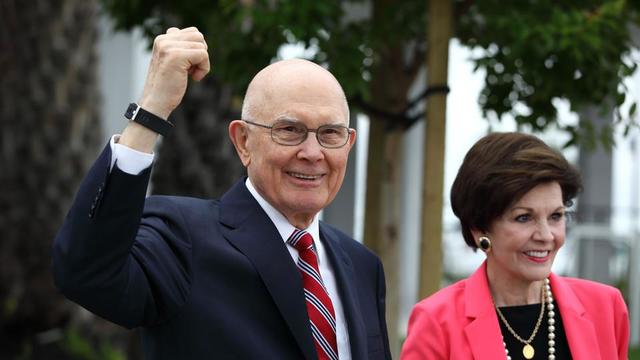 The Oakland California Temple of The Church of Jesus Christ of Latter-day Saints has been rededicated under the direction of President Dallin H. Oaks, first counselor in the First Presidency.

President Oaks was accompanied by Elder David A. Bednar of the Quorum of the Twelve Apostles on Sunday for the rededication, which included three sessions. They also spoke to youth at a special devotional Saturday, June 15.

“I’m astonished at the beauty of what has been done in the restoration of the Oakland Temple,” President Oaks said. “What is here is a remarkable house of the Lord in the quality of the architecture, in the quality of all the finishing of the various rooms and in the beauty overall. It is marvelous, and it’s accentuated by extraordinarily beautiful original art that has been added during the restoration.”

More than 123,000 people were able to see inside the 55-year-old temple throughout most of May during a public open house and learn why the Church builds temples. The temple is located at 4770 Lincoln Ave. in Oakland.

“People are drawn, not just to the beauty of this place. You feel something when you come onto the grounds of the temple,” Elder Bednar said. “And so, they may not know what that is, but they certainly like it. It’s more than just a beautiful picture. There’s a spirit that accompanies this place, and those who are not of our faith are drawn to that very strongly.”

Elder Bednar has special interest in the Oakland Temple because he was born in Oakland.

“I was a 12-year-old boy and attended the dedication in 1964 when President David O. McKay presided,” Elder Bednar said. “We’re standing not too far from an area where President McKay came out of the temple following the dedicatory session, and I stood there with my mother waiting for the opportunity to try to shake his hand. To be this close and think back more than 50 years to that experience in my youth — it’s kind of surreal. It’s fabulous. I never could have imagined I’d be here in this role and responsibility, but it’s just a magnificent thing to participate in.”

At the Saturday devotional, President Oaks spoke about anxiety among young people. “There are alarming increases in diagnoses of anxiety among young Americans, but as members of the Restored Church of Jesus Christ you have a favored way to avoid this nationwide trend.”

He said a possible cause of anxiety among youth is the way technology allows teens and other young people to regularly compare themselves and their lives with those of their peers. He said, “such regular comparisons depress self-esteem.”

“We give thanks,” explained President Oaks, “that our Heavenly Father has provided you the fullness of His doctrine, the Atonement of Jesus Christ, and this Holy temple where you can come for strength to combat the evil forces that confront you.

“You are sons and daughters of a Heavenly Father who loves you, who honors your service, who shares your concerns, and who listens to and answers your prayers,” he said.

Finally, President Oaks encouraged the youth. “Don’t lose your vision of eternal life. In these days — as in many stressful times of the past — young people should go forward with optimism and prepare for a long and productive life. Keep the commandments. Serve missions. Get an education. Have children. Have faith.” 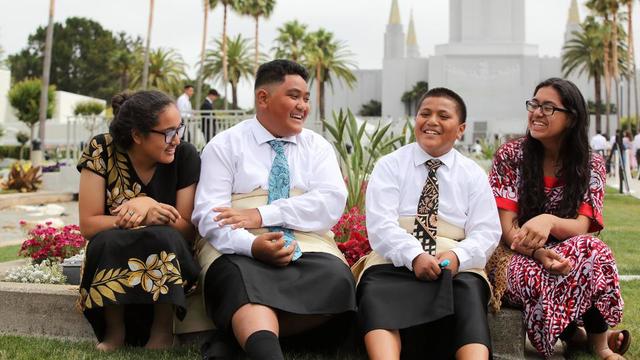 A few Latter-day Saint youth shared their thoughts both on what President Oaks taught and on the importance of gathering together to learn.

“I feel like anything’s possible. I feel like I could be able to see my family again,” Losaline Moa, 15, of Oakland. “Knowing that families can be together forever is important, especially when families are the one that you turn to, and they’re like your foundation and they’re the ones who support you and bring love to you.”

“I’m glad to witness it at this age, and I think that we were made to be here at this age and at this time,” added Kineleti Nisa, 15, of Oakland. “I know that all the friends and us youth, we all come together and we push through challenges together,”

The Oakland California Temple is the 13th temple to undergo renovation. It was the Church’s second temple in California (following the Los Angeles California Temple) and currently serves Latter-day Saints from 31 stakes in Northern California. The temple is one of seven temples in the state, with an eighth announced in Yuba City. There are currently 209 temples operating, announced, under construction or being renovated throughout the world.

Temples of The Church of Jesus Christ of Latter-day Saints differ from chapels where members meet for Sunday worship. A temple is considered a “house of the Lord,” where Christ’s teachings are reaffirmed through sacred ordinances that unite families for eternity. Inside, members learn more about the purpose of life and make covenants to serve Jesus Christ and others.