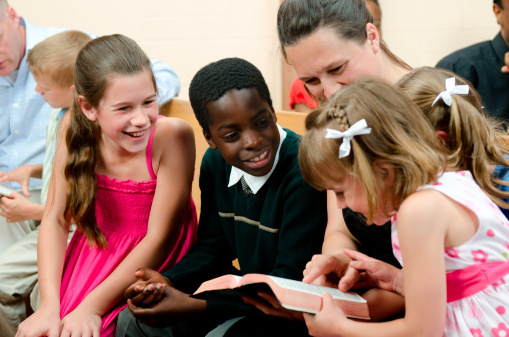 "What did you do, make someone angry? That's like the worst calling."

I looked at my sister's text and smiled. If she only knew why I had my new calling, she would think I was crazy.

That's because few callings inspire more apprehension among members than the one I have now: nursery teacher. And for the first two years of living in a family ward, I'll admit I wasn't so sure that nursey would be my calling of choice, either.

But I kept feeling like something was missing from my Sabbath day. I loved learning about the gospel in Sunday School and Relief Society, but I felt like I needed to serve in another way so my husband and I decided to ask for a calling. Yeah, we became one of "those" people. But there was just no denying that I felt really strongly about this.

The first few weeks as nursery teachers were a bit of a learning curve. Going class to class trying to find parents while holding an inconsolable 2-year-old, becoming totally okay with asking 2 year olds if they were "poopy," learning that the kid you have been calling "Chloe" for the past two weeks was actually "Cali," separating rivals, and above all, learning the art of distraction when one looked at you with tears in their eyes and asked, "Mommy?" with 1 hour 30 minutes left to go.

But as the months passed, my husband and I became more and more comfortable with our new calling. We started quoting all the funny things the kids would say and talked about all the sweet things we saw them do. Instead of dreading the two hours every Sunday like I thought I would, I started to look forward to them.

I may not be able to have life-changing spiritual discussions with the nursery kids, but I notice things about them that make me want to change my life. Like when one nursery kid would pat the head and rub the back of another kid who was fussy. Or the instant smile all of them get whenever they see a picture of Jesus. These things were beautiful reminders of what I could do better in my life.

Mormon Life Callings NurseryCallings,Nursery,Mormon Life
Comments and feedback can be sent to feedback@ldsliving.com