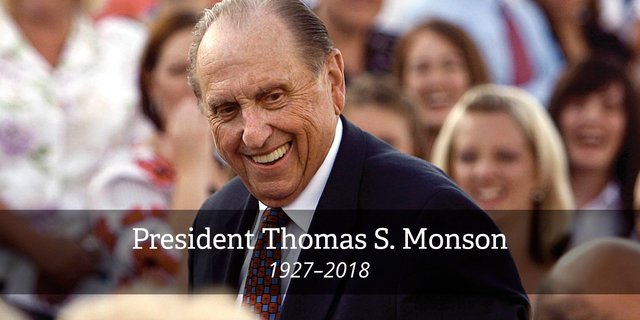 What "Time," CNN, and Other Major News Outlets Are Saying About President Thomas S. Monson

After our beloved prophet's passing late on Tuesday, January 2, media outlets from across the globe have featured the life and death of President Thomas S. Monson. But what did these media outlets have to say about this great man and prophet of God? Here is just a taste:

A church bishop at the age of 22, the Salt Lake City native became the youngest church apostle ever in 1963 at the age of 36. He served as a counselor for three church presidents before assuming the role of the top leader of the church in February 2008. . . .

Mormons considered Monson a warm, caring, endearing and approachable leader, said Patrick Mason, associate professor of religion at Claremont Graduate University in California. He was known for dropping everything to make hospital visits to people in need. His speeches at the faith's twice-yearly conferences often focused on parables of human struggles resolved through faith.

He put an emphasis on the humanitarian ethic of Mormons, evidenced by his expansion of the church's disaster relief programs around the world, said Armand Mauss, a retired professor of sociology and religious studies at Washington State University. . . .

Throughout his life, Monson was an avid fisherman who also raised homing pigeons, specifically, roller pigeons who twirled as they flew. He was known for his love of show tunes, Boy Scouts, and the Utah Jazz.

Testimonials poured in praising the “bear-hugging” Monson’s approachable and down-to-earth manner, which he retained even as he rose through the hierarchy of the 16-million-strong Church over the course of his 50-year career. Under Monson’s aegis, the Church’s threefold mission — proclaim the gospel, perfect the saints, and redeem the dead—was bolstered by a fourth, “outreach to the poor and less fortunate,” Stuart Reid, a former state legislator, told The Salt Lake Tribune.

“More than anything else during a lifetime of ministry, President Monson will be known for his charitable acts,” Reid said. . . .

Mormon public figures paid tribute to Monson on Twitter, including former Congressman Jason Chaffetz and Sen. Orrin Hatch, who called Monson “among the greatest men I have ever known.”

Monson was born in Salt Lake City in 1927. He served in the US Navy near the close of World War II, according to his church biography. After the war, he graduated from the University of Utah and started a career in publishing.

He spent his life serving in the church, becoming a bishop at the age of 22. He was presiding over the church's Canadian mission by his early 30s, becoming a member of the Quorum of the Twelve Apostles—which is a high executive body in the church—at age 36. He also supervised the church's missions around the world including the western US, South Pacific, Mexico, Central America and Europe, according to the church's statement. He was also assigned to countries behind the Iron Curtain where he worked to spread the religion during the Cold War and helped to get the Freiberg Germany Temple constructed. . . .

Monson was "among the greatest men I have ever known," tweeted Sen. Orrin Hatch of Utah. "Service was his motto and humility his hallmark." . . .

On his 81st birthday, Monson was asked what would be an ideal gift from Church members. He replied: "Do something for someone else on that day to make his or her life better. Find someone who is having a hard time, or is ill, or lonely, and do something for them. That's all I would ask."

One of the most memorable moments of Monson’s tenure came in October 2012, when he announced at church conference that the minimum age to depart on missions was being lowered to 19 from 21 for women; and to 18 from 19 for men. The change triggered a historic influx of missionaries and proved a milestone change for women by allowing many more to serve.

Taking the lead from Hinckley, Monson also continued the church’s push toward being more open about some of the most sensitive aspect of the faith’s history and doctrine. . . .

Like his predecessors, Monson traveled the world, visiting countless countries to give speeches, dedicate temples and preach to Latter-day Saints. Under his watch, 27 new temples were planned or built.

Membership of the religion swelled to nearly 15.9 million during his tenure, with more than half outside the United States. He was viewed as a steady hand at a time when the church came under scrutiny during the 2008 and 2012 presidential campaigns of Mormon Mitt Romney. . . .

However, the church supported a measure to ban gay marriage in California in 2008, prompting a backlash that included vandalism of buildings and demonstrations outside church temples nationwide.

Monson's biggest change to the church was lowering the age of full-time missionaries in 2012 in order to boost enrolments from younger men and women, according to the Salt Lake City Tribune.