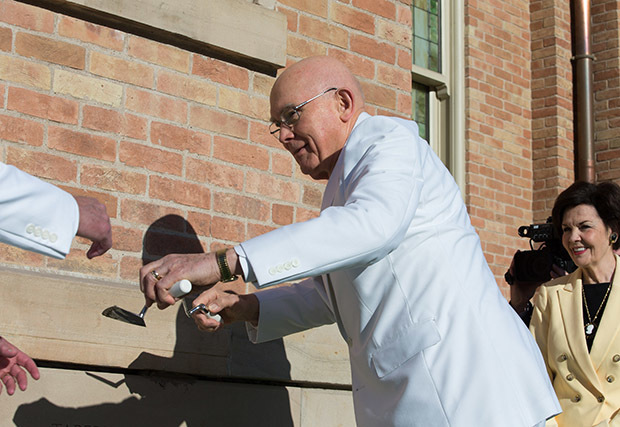 What Was Placed Inside the Provo City Center Temple's Cornerstone Box?

Sunday marked a historic day for the Church when the Provo City Center Temple, the 150th temple worldwide, was dedicated.

Among the exciting celebrations and ceremonies that weekend was the cornerstone ceremony, performed at the first dedicatory session held on Sunday, March 20 at 9:00 a.m. With the rising sun marking a beautiful new day in the valley and the Church's history, Elder Dallin H. Oaks performed the ceremony, saying, “Thank you to the many who have gathered here on University Avenue to witness this symbolic completion of the Provo City Center Temple. That symbolic completion is our placing some mortar around this portion of the temple, which represents in a symbolic way the cornerstone and which will have a box of important artifacts placed within it.”

But what were those "important artifacts placed within it"? And why does the Church perform these ceremonies?

Temples are not the only places where the Church performs cornerstone ceremonies, nor are Latter-day Saints the only religion to do so. Many religions and groups perform such ceremonies, often adding more elaborate rituals. Yet almost all include sealing the cornerstone with a mason's trowel made of gold or silver.

The foundation of this practice stems from the symbolic significance of cornerstones. Cornerstones are the first stones laid on a foundation and are vital to a building's strength, integrity, and endurance through time, making them a perfect reminder of the work that will be done within that building. For members of the Church, cornerstones have an added measure of significance, since we often call Jesus Christ the Cornerstone of our Church. That is why cornerstone ceremonies are often performed for meetinghouses, tabernacles, temples, statues, and other significant buildings and monuments for Church use, to remind us these edifices are dedicated to Him whose Church this is.

Among the few items placed in the cornerstone box at the Provo City Center Temple were several books: one written by President Monson, another titled Provo’s Two Temples, and Called to Teach: The Legacy of Karl G. Maeser. In addition to the books, a set of scriptures and a hymnbook were included along with a few stories about the tabernacle and one or two small booklets and other memorabilia. 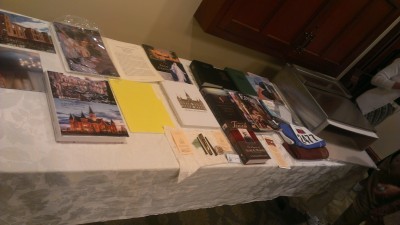 In case you're curious, here's a list of what is contained in some of the cornerstone boxes for other temples in the Church, according to the Deseret News:

Freiberg Germany Temple: Copies of two dedicatory prayers by President Gordon B. Hinckley, one from the 1985 dedication and one from the 2002 rededication.

Draper Utah Temple: Ink pens crafted from the scrub oak cleared from the temple lot and the African makore wood used in the temple's interior.

Accra Ghana Temple: Letters from Ghanaians interested in the LDS Church prior to the 1978 revelation allowing black Latter-day Saints to be ordained to the priesthood.