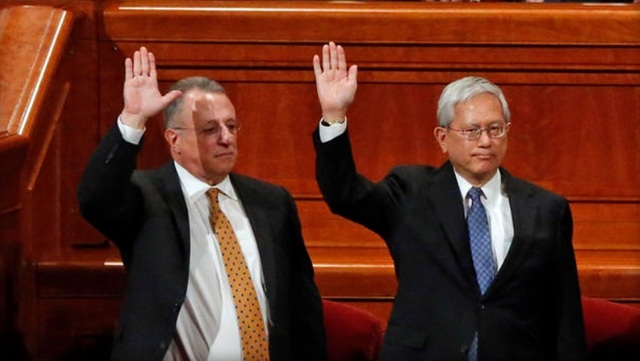 What "Washington Post," NPR + Other Media Outlets Are Saying About Our New Apostles

The Church's announcement of two new members of the Quorum of the Twelve Apostles has been making headlines around the country. Here is what major media outlets have to say about these new Church leaders:

The selections of Ulisses Soares of Brazil and Gerrit W. Gong, a Chinese-American, were announced during a twice-annual conference of The Church of Jesus Christ of Latter-day Saints in Salt Lake City. The choices triggered excitement among a contingent of Mormons who for years have been hoping for the faith’s top leadership to be more representative of a religion that has more than half of its 16 million members outside the United States.

“It’s a sign that the church is for everyone,” said Guilherme De Castro, a 37-year-old Mormon from Brazil who was in attendance for the announcement. “It doesn’t matter where you are from or the way you look.” . . .

The new selections reflect the “rising focus of church leadership on the world outside the United States, where the church is growing most rapidly,” said Mormon scholar Matthew Bowman, an associate professor of history at Henderson State University in Arkadelphia, Arkansas. . . .

Of the 116 highest-ranking church leaders serving in several tiers, 40 percent of them were born outside the U.S, said Dallin H. Oaks, first counselor to President Nelson, on Saturday.

The diversity in leadership should help broaden conversations about race and ethnicity and add new prisms through which the gospel is viewed, said Ignacio Garcia, a professor of Western and Latino history at Mormon-owned Brigham Young University.

This Easter and Passover weekend, it's the Mormon Church that is making headlines. On Saturday, the church's first Latin-American and first Asian-American apostles were named.

The two men diversify the Quorum of the Twelve Apostles, whose top leaders until today consisted solely of white men. One apostle, Dieter Uchtdorf, hails from Germany. They rank below the church president and his two counselors, acting as the core group of Mormon policymakers.

One of the new apostles, Ulisses Soares, 59, was born in Sao Paulo, Brazil. He earned a bachelor of arts in accounting and economics and then a master's of business administration. In addition to his service at the church, he worked as an accountant and auditor for multinational corporations.

The other newcomer, California-born apostle Gerrit W. Gong, pursued Asian, university and philosophy studies before receiving a doctorate in international relations from Oxford University. He served as a special assistant to the undersecretary of the U.S. State Department and as a special assistant to the U.S. ambassador in Beijing. He also worked at the Center for Strategic and International Studies in Washington.

The Mormon church made history and injected diversity into a top leadership panel on Saturday by selecting the first-ever Latin-American apostle and the first-ever apostle of Asian ancestry.

The selections of Ulisses Soares of Brazil and Gerrit W. Gong, a Chinese-American, were announced at the start of a twice-annual conference of The Church of Jesus Christ of Latter-day Saints. . . .

The selections of Soares and Gong are likely to trigger applause from a contingent of Mormons who were anxious to see the faith’s global footprint represented in leadership. More than half of the religion’s 16 million members live outside the United States.

The apostles tend to be older men who have achieved a measure of success in occupations outside the church. The last five chosen for the Quorum of the Twelve Apostles, including three in October 2015 and two on Saturday, fit that description.

The 59-year-old Ulisses Soares of Brazil was an accountant and auditor for multinational corporations in Brazil before joining church leadership, according to a church biography.

The 64-year-old Gerrit W. Gong, a Chinese-American, worked for the U.S. State Department, the Washington, DC-based Center for Strategic and International Studies and Mormon-owned Brigham Young University before being selected for the lower-tier church leadership panel, his church biography shows.

The selections of Soares and Gong marked church history as they became the first Latin American apostle and first-ever apostle of Asian ancestry. They joined a panel that before was made up entirely of white men from the U.S. with the exception of one German, Dieter Uchtdorf.

Soares and Gong filled openings by the deaths of Monson and Quorum member Robert D. Hales, who died in October at age 85.

The group is modeled after Jesus Christ's apostles. Members serve until they die or ascend to the presidency.