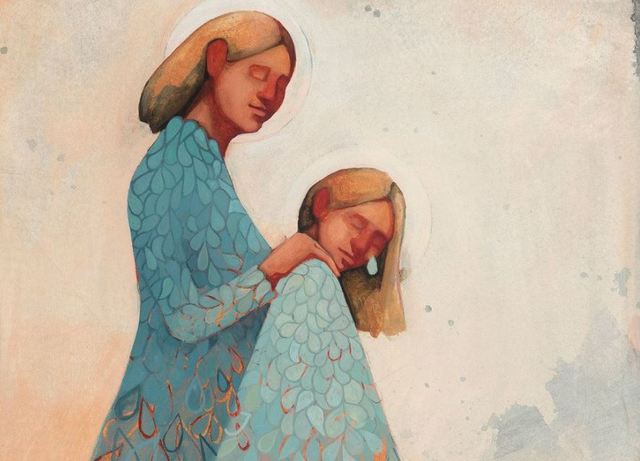 What Watching Her Grandma Slip Away Taught Caitlin Connolly About Angels, Dreams, and Our Interconnectedness

My grandma is dying, and I’ve visited her almost every day this week. I thought the difference between living and dying would be more like a light switch: you’re either on or off; you’re there or you’re not. But my grandma has been like a dimmer, and every time I see her she’s a little bit less alive and less there than she was the day before.

Most days her body is weak and it’s difficult for her to speak. Some days she’s charged up with an extra volt of energy and no one knows where it came from and she makes us all believe that maybe she’ll live a little longer after all, but the next day she’s back to dying again. I think she’s having a hard time deciding whether or not she wants to go but her body knows that it is time.

►You'll also like: The 3 Simple Words My Grandma Brought Me from the Spirit World

Some of my family members took shifts sleeping by my grandma at night, and they said sometimes she slept so well during the day that she would have terrible, painful, sleepless nights. I thought of my twin babies, now almost 2 so I guess not really babies anymore, and I remember how desperately I wanted them to sleep through the night. Friends and family would visit them to celebrate their new life, and I think all of the love and chatter in the room would put them right to sleep. And then, at night, when everyone would leave, they would wake completely and be so upset because they didn’t know how to use their new bodies that they were in.

Friends and family gathered around my grandma and we celebrated the life that she lived. We told favorite stories and told her we loved her and I think all of our love and chatter put her right to sleep. One time she woke from a long nap and told me, “Every time I walk through the door I went into a different house,” and I wondered where she was going when she wasn’t really here, and I wondered what she was hoping to find behind the doors she kept opening. She would often wake up in pain and croak out the words, “My legs,” and we would move them for her because she couldn’t move them herself, and I could see how uncomfortable she was in her body that no longer let her use it.

►You'll also like: Life After Death: 6 Insights into the Spirit World

Like a perfectly ripe fruit, my grandma got really sweet right at the end. She said so many nice things like “so kind” and “thank you” and simple gentle reaffirming sounds of gratitude came from her dry lips as we tended to her needs. She had to be fed, changed, and bathed—which was all great for me because I had recently become very good at doing all of that.

The first time I visited her in the hospital I fed her some Jello and teaspoons of grape juice. The next time I visited her she smiled as she watched my boys eat strawberry ice cream from small plastic cups, and she ate strawberry ice cream for breakfast the next day. I visited her a few more times and sometimes she ate but mostly she didn’t, and after one week of not eating hardly anything at all, biting down on a small soaked sponge put so much water in her mouth that she would choke on it and cough.

I remembered my first days in the hospital with my baby boys a nurse told me that babies don’t need to eat very much. She said a brand-new baby stomach was about the size of a grape and a month later about an apricot size. Now I watch my boys feed themselves with spoons and forks and I counted the other day that they have eaten more than 1,400 apple sauce packets from Costco. Their stomachs are still growing and eventually, they’ll learn how to hold a hamburger or eat corn off the cob or lick a popsicle from a stick.

I ate corn on the cob at my grandma’s house for dinner often; she’d buy it from a local market during the summer when it was extra juicy and fresh. She always had toothpicks to get the corn skin out of her teeth, and I would chew on one for fun after I ate. The kernels of corn matched the bright yellow of her cabinets that wrapped around her kitchen; she had guts and style to choose a color like that.

►You'll also like: 5 Insights into the Spirit World from Those Who Have Seen It

She loved interior design and curated her house the same way she curated herself, classy with bold pops of patterns and color. Her house was beautiful and always immaculately clean. Thinking about it now, as an adult woman, I feel confused about how she even did it. Her silver hair was perfectly poofed and moved effortlessly around her ears with a tuck of a curl. Her nails were perfectly painted with neutral tones and the white of the tip was manicured to a square. Her hand-ironed bedding was tucked around the mattresses in her home with perfectly tucked envelope corners that came to a point on the end.

While my family was gathered together I told my grandma about a dream I had when I saw my grandpa a week after he died. He was on a bus and I was there with him for a short moment of time. The bus was old and metal and the inside was made of chrome that reflected the light that was pouring in from the windows. The light was so bright coming into the bus that there was nothing more to see than white and it lit up the stubble on my grandpa's cheeks and wisps of white hair hovering off of his head. There were other people on the bus too, but he had an empty seat on either side of him and I realized now, a few years later, he was saving a seat for her. I told her, “Nana, I think Grandpa is saving you a seat and he’s excited to see you again,” and she said, “I think about him waiting for me often.”

►Related content: How One Widow and Her Family Found Peace after Her Husband’s Suicide

The last time I saw my grandma, I said the things that I couldn’t leave unsaid. I set my head next to her thin arm and laid it down on her mattress of the care center bed. I imagined her hand, unmovable, moving just for me and her manicured nails tickling my back like she did when I was small. I cried and I told her I loved her and then I thanked her. I thanked her for being such a good mom to my mom and I thanked her for my mom, who is such a good mom to me. And I saw myself, connected through these two women and then to all of the women that came before. There were so many of them, like stars in the sky, quilted together in a brilliant tapestry of light. And it made my three women on earth seem so few. I had my mother and she had her mother, but only for a few more hours. Her mouth was so dry that it couldn’t be wetted by hand and I knew she would die very soon. And when she did it would just be me and my mom, two sister-less women connected through birthing and being birthed, alone on this dusty weathered earth. And I felt so small, and suddenly living seemed harder than dying. My grandma would leave this life and she would be among the numberless stars, the women who came before her and the women who came before them, and they would wrap their fabric of light around her and hold her in their warmth and she would bear them and they would bear her and she would not be alone.

My grandma died the next day on a Sunday morning. She stopped breathing and her heart stopped beating and her spirit left her body behind in that care center in Utah. Traveling to the stars, even as an angel, I imagine would take a very long time. I think of her now, full of life, hand in hand with my grandpa, filling the seat that he saved for her, traveling on a gently humming bus moving in the light towards those who are waiting for her to arrive at her next stop, her next beginning. 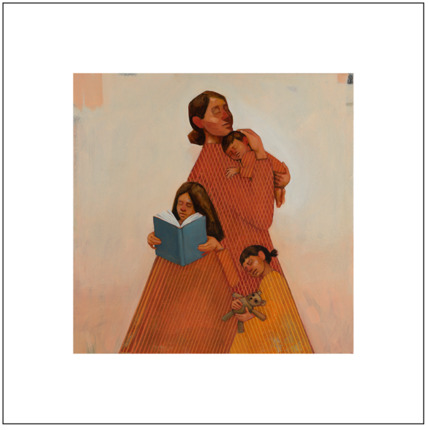 Caitlin Connolly is an artist living in Provo, Utah. Her artwork often explores the female experience as she seeks to understand herself and all women more fully. Her artwork is a part of private and public collections and can be viewed comprehensively at caitlinconnolly.com. You can purchase her art at deseretbook.com.