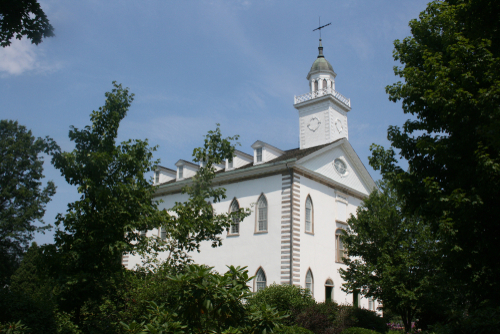 Did you know that the first temple of this dispensation, the Kirtland Temple, was dedicated on March 27, 1836—183 years ago? In light of that anniversary and the recent announcement that all temples are temporarily closed because of COVID-19 concerns, here are a few things we learned from another time in history when life was uncertain and temple worship was not always an option.

1. Temple work doesn’t have to stop without temples.

Did you know that very little temple ordinance work was done in the Kirtland Temple? Only the washing and anointing ordinances were introduced in this place of revelation. The sacrament was administered there, and the school of the prophets was held there, but there was, as Brigham Young said, “no basement in it, nor a font nor preparations to give endowments for the living or the dead."

Though the Saints were “endowed” with power through the appearance of Jesus Christ, the restoration of the priesthood, the revelation about the celestial kingdom and work for the dead, and other miraculous events that occurred in that temple, it wasn’t until the Saints were in Nauvoo that baptisms for dead, the endowment, and sealings as we recognize them began being performed. But even in Nauvoo, it took time before the temple was finished, so the Latter-day Saints were able to perform baptisms in the river until the Lord commanded them (twice!) to stop using the river and finish the temple. Endowments for the dead weren’t performed until the Saints made it out west, with the first endowments for the dead being performed in the St. George Temple.

Today, even while the temples are closed and we are in our homes, we, like the Saints in Kirtland, can do the beginning parts of the work of salvation. As we index records, identify new ancestors, and add documented information that we need before we can perform our ancestors’ ordinances, we can still participate in temple work and be prepared, like the early Saints were, for the time when all ordinances can be performed. I’m excited for all the people whose work will be ready to do when the temples reopen!

2. Temple worship often adapts to local circumstances, though the ordinances remain the same.

Throughout Church history, there were delays and problems when it came to building temples:

And yet, after the Kirtland temple was left behind, they looked toward the temple in Nauvoo, then Far West, then Salt Lake. And though some temple work was completed in other approved places (such as the Endowment House) while the Salt Lake Temple was under construction, they knew the importance of building a temple to the Lord to perform all the ordinances and receive all the blessings. In fact, Brigham Young ultimately instructed a temple to be built in St. George while construction on the Salt Lake Temple remained careful and slow. They always looked to the future and worked to live up to their covenants in the meantime with faith, and they were blessed.

Just as temple worship was often delayed or interrupted for early Latter-day Saints, we can think of this as a temporary delay because of the world’s circumstances. In the meantime, we can move forward with faith, doing our best to navigate the circumstances we are in and live worthy of the covenants we have already made or will make. The Lord watches over His people—and I think our faithfulness and patience during this trial will make it that much sweeter when we are able to enter His temples again.

3. The blessings of temple covenants are available even when temples are not.

The early Saints wanted to receive their temple ordinance before they were forced to leave Nauvoo. Saints Vol. 1 records:

“When Brigham arose the next day, a crowd of Saints met him outside the temple, eager for their endowment. Brigham told them it was unwise to delay their departure. If they stayed to do more endowments, their way out of the city could be impeded or cut off. He promised they would build more temples and have more opportunities to receive their blessings out west.

“Then Brigham walked away, expecting the Saints to disperse, but instead they climbed the steps to the temple and filled its halls. Turning around, Brigham followed them inside. He saw their anxious faces, and he changed his mind. They knew they needed the endowment of power to endure the hardships ahead, overcome the sting of death, and return to the presence of God.

“For the rest of that day, temple workers administered the ordinances to hundreds of Saints. The next day, February 4, 1846, an additional five hundred Saints received their endowment as the first wagons rolled out of Nauvoo” (emphasis added).

The early Saints knew that they didn’t have to go to the temple to receive the blessings that came from making temple covenants. In fact, Saints Vol. 2: No Unhallowed Hand tells us that members of the Mormon Battalion were counseled to “Keep their bodies clean, to be chaste, and to wear their temple garments if they had received the endowment” (chapter 3, emphasis added). They drew upon the power of their temple covenants even when the temple was not accessible. And so can we.

Inviting Temple Power into Our Lives

The Bible Dictionary reminds us that “A temple is literally a house of the Lord, a holy sanctuary in which sacred ceremonies and ordinances of the gospel are performed by and for the living and also in behalf of the dead. A place where the Lord may come, it is the most holy of any place of worship on the earth. Only the home can compare with the temple in sacredness” (emphasis added). In this time where church is being held at home and in some cases the sacrament is being administered at home, it is more important than ever to remember this statement.

Perhaps we can, as the Saints did, find ways to bring the spirit of the temple to our homes. We might hang more pictures of temples around our home. We could share journal entries with our children or family members about experiences we have had in the temple, when appropriate. We can strive to improve ourselves and grow our faith by the way we interact and spend time together at home. However you want to do it, our homes can be temples while the temples are closed. As Elder Gary E. Stevenson said in his April 2009 conference talk, “Temple. One other word is equal in importance to a Latter-day Saint. Home. Put the words holy temple and home together, and you have described the house of the Lord!” (“Sacred Homes, Sacred Temples,” Elder Gary E. Stevenson, April 2009 general conference.)