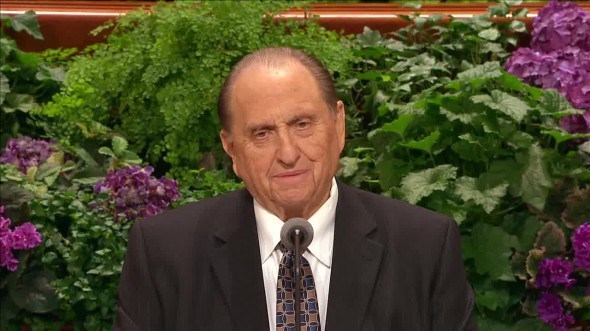 By now, many of you have read the article by Greg Trimble entitled, “President Monson . . . I Wish I Could Have Come and Held You Up." I, like Greg, had the same reaction as I watched President Thomas S. Monson lose his strength and almost fall over right before our eyes during the final session of General Conference.

Towards the end of his address, President Monson’s speech slowed and he began repeating words. He appeared to have difficulty standing, and he was leaning on the podium to brace himself. My feelings went from slight concern to fear very quickly. My greatest worry was that he would fall, and my greatest question was, “Why is no one standing by him?”

You might recall other moments when general authorities have needed support while giving a talk in general conference. Perhaps the most recent and poignant example was Russell M. Nelson who came to the aid of Joseph B. Wirthlin as he gave his talk on “The Great Commandment.” I was certain this would be a similar occurrence, but none of the apostles ever came to support the prophet.

WHY not? I couldn’t understand.

I read one sweet sister describe her similar reaction to seeing President Monson in that state. She said, “I was on the edge of my seat ready to reach through the T.V. with a prayer on my lips that our beloved prophet, President Monson would be OK.”

Luckily, President Monson was able to finish his talk and we all watched with relief as President Uchtdorf and others grabbed hold of President Monson and helped him to his seat. That was the end of the story as I knew it.

As it turns out, with the lights dimmed around the podium, very few could see what President Uchtdorf was doing as the prophet concluded his remarks. Michelle Cope, however, was there and gave the following beautiful account:

“Most of you probably did not see what was happening behind President Monson at the end of his talk. I was on the floor, just a few rows from the very front of the Conference Center with a clear view of the scene. You might have noticed that President Monson really struggled to finish the last couple minutes of his talk and especially the last 30 seconds. I was afraid for him. I thought he might faint, pass out, or something worse.

The tenderness that is shown between the prophets and apostles of the Lord Jesus Christ is so pure and powerful. What a beautiful demonstration of love from President Uchtdorf, as he in very word and deed reached out to lift and sustain his friend and prophet Thomas S. Monson. What a beautiful parallel to the love and concern that God Our Heavenly Father, and the Lord Jesus Christ have for each one of us.

As President Monson so often teaches us, when we are on the Lord’s errand, He promises, “I will be on your right hand and on your left, and my Spirit shall be in your hearts, and mine angels round about you, to bear you up.” Next time you are going through difficulties, and your afflictions leave you a little wobbly and short of breath, don’t worry if you aren’t able to see anyone by your side, because God has your back – and President Monson, we have yours!

Lead image from I Love the Book of Mormon.

Read the rest of this story at www.ilovethebookofmormon.org