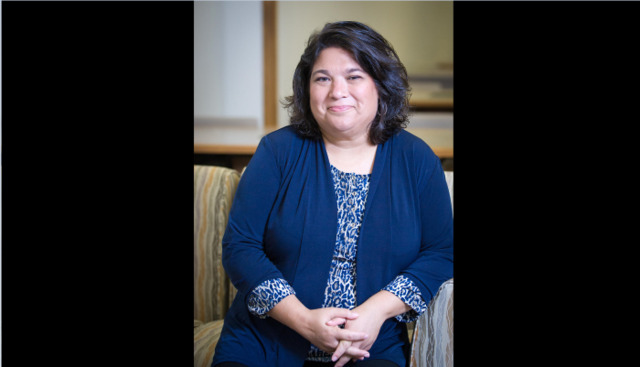 All In host Morgan Jones had the latest podcast episode on her mind while attending church on a recent Sunday. She was touched when the sacrament meeting speaker shared how Jesus is the perfect example of mourning with those that mourn. The speaker explained that when Lazarus died, Jesus went and wept with Mary and Martha—even though He knew that Lazarus would soon rise from the dead. He stopped to recognize and share in the mourning women’s emotions. Jones saw it as a beautiful reminder to the message Michalyn Steele would be sharing in a podcast episode that aired this week.

This episode of All In features BYU law professor Michalyn Steele, who has devoted her life to civil rights work. Steele is a member of the Seneca Nation of Indians of New York and was recently appointed to BYU's committee on race, equity, and belonging. Her background and life’s work have given Steele a unique perspective on how Latter-day Saints can follow the Savior’s example and truly mourn with those that mourn, especially in the face of current racial discussions.

Morgan Jones: As I've tried to talk and listen to friends' experiences, I've realized that the reason that everything feels kind of loud right now is because, for so long, it felt like no one was listening. And so now, when it feels like people are actually listening, you're gonna speak up, and you're gonna be a little bit louder than you have been.

The thing that I've tried to realize . . . is, like, "Okay, so you didn't sleep well one night because you were worried about this stuff. Well, there [are] a lot of people who have not slept well for a very, very long time." And so, I think it's so important for us to invest in that, and even if it does. . . come at an expense, it's an emotional expense worth making.

Michalyn Steele: Morgan, it is an expense that we have covenanted to bear—that we would mourn with those who mourn, not just hear about their pain and feel sorry about it but do the work of mourning with those who mourn. We've covenanted to bear their burdens, so I think it's tremendous if we can fulfill that covenant more fully and see and hear and sit with the pain, especially of the Black community at this time that we are seeing and hearing afresh, but they are not experiencing afresh. It's the same thing, and they're tired, and it is tiring. So for us to be able to sit with that pain, not ask them to make us more comfortable in it, not ask them to just continue to do the work of bearing it mostly on their own, but truly to link arms and to shoulder the burdens in whatever way they ask us to, I think is sacred work, and it is work that the Lord would have us do as part of our covenant with the Lord for our brothers and sisters. He wants us to be one. He wants us to not just feel empathy, but to do the things that will bring some relief for those burdens.

In his letter from Birmingham Jail, Dr. King taught us a really important truth. He said, "I can never be what I ought to be until you are what you ought to be, and you can never be what you ought to be until I am what I ought to be." He called that the "inescapable network of mutuality." He said that "we are tied in a single garment of destiny." In summarizing his position from the jail, Dr. King said that as we work to fulfill this network of mutuality, as we join together, all we're doing is recognizing the bond that is there, that we're tied in this single garment of destiny. When we work to make the world more just for one another, he said we become "coworkers with God" in that endeavor, that that is God's work and that when we join it, we become His coworkers. And I love that idea. It's what I try to help my law students to understand, that a legal education gives you tools and empowers you to do good if you will use them to that end.

The director of the NAACP Legal Defense Fund, which was the position that Charles Hamilton Houston had and Thurgood Marshall—that position is today occupied by a woman named Sherrilyn Ifill. And I heard her say recently that people ask her, "What do I do? I've got this knot in my stomach that won't go away about the things that I'm seeing happening." And she said, "I've had a knot in my stomach since I was 21 and I have been learning these things. I don't know how to make it go away." So I think it's important that we sit with this pain and bear it, help lift it, and not ask people to be quiet because it's uncomfortable or ask people to move on to the next news story because it's uncomfortable. We really do have to join together as coworkers with the civil rights community that has been doing this work for generations, and as coworkers with God. And I know your podcast goes all over the world, but I think particularly in the United States, as people who believe in the ideals of the Constitution and want to see them realized, we just absolutely have not given enough credit to the African American community—to Black people—for helping us to realize the promises and potential of the Constitution in respecting the equal dignity under law and the equal dignity of all of God's children.