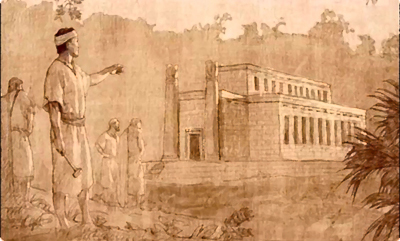 What the Book of Mormon Teaches Us About the Temple

What fascinating insights from the Book of Mormon that teach us more about the importance of temples.

Although the exact details of the temple and its ordinances would be revealed over time, the Lord provided general information regarding its purposes early on, including through texts in the Book of Mormon. From the beginning, the Nephite culture was temple-centric, so readers should not be surprised to see mentions of it, as well as temple imagery and themes, throughout the Book of Mormon record. Near the beginning of the book, Nephi related that one of the actions of his new community was to build a temple in the city of Nephi (2 Nephi 5:16). This temple played a role in the background of Jacob’s writings (Jacob 2:2, 11).

This temple in the Land of Nephi was built to look and function like the temple of Solomon in Jerusalem. It was the first of several temples mentioned in the Book of Mormon account. In Mosiah 1–6, the people gathered to the temple in the city of Zarahemla to hear the words of King Benjamin. King Noah had a temple built in his city in the land of Nephi (Mosiah 11:10), which was subsequently used by his son, Limhi (Mosiah 7:17). Helaman 3:9 mentions that there were temples built in the cities of “the land northward.” Alma and Amulek traveled through all the Nephite lands in and around the land of Zarahemla, “preaching repentance to the people in their temples” (Alma 16:13). Alma 23:2 mentions temples among the Lamanites as well. The Lord Jesus Christ appeared to the people at “the temple which was in the land Bountiful” (3 Nephi 11:1).

Within the text of the Book of Mormon, one can find many of the revealed purposes of temples. As outlined below, the temple was a place for teaching and for revelation, for ordinances, for receiving power from on high, and a place for the Lord to show Himself to His people.

Nephite Temples Were Places For Sacred Teaching And Revelation 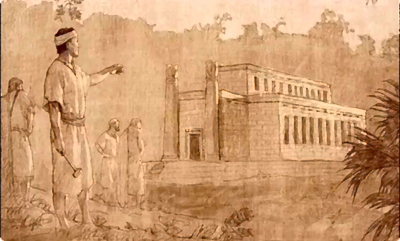 Nephi consecrated Jacob and Joseph to be priests and teachers (2 Nephi 5:26), and the Book of Mormon presents explicit instances of Jacob teaching at the temple (Jacob 1:17; 2:2, 11). Jacob declared that he had received revelation from the Lord regarding what he was to teach (Jacob 1:17; 2:11).