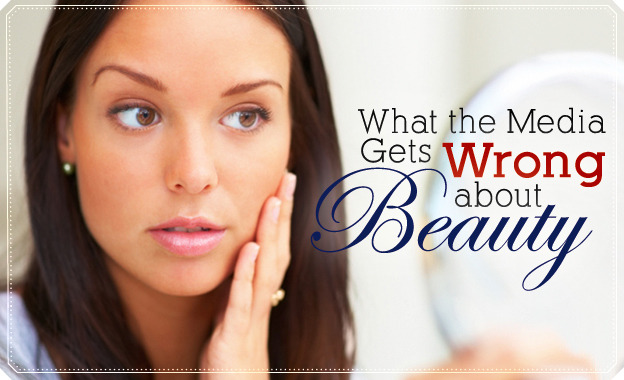 What the Media Gets Wrong about Beauty

In a world where a constant—and we mean constant—flow of media images far exceeds the number of women we could ever see face to face, this abnormally thin and digitally-enhanced feminine ideal has become the norm in our minds. A counterfeit, dangerous, unattainable norm.

This one relentless image of what it looks like to be a woman is exhibiting its influence in striking ways. The average American spends 5 hours every day watching television and another 5 hours on digital devices, viewing hundreds of advertisements in the process. With so much exposure to the positively portrayed "normal" woman, it's no wonder real people are feeling painful effects. This unrealistic standard of not just "beauty" but also "normal" and "healthy" reaches anyone exposed to any media. That's pretty much everyone.

This pervasive exposure to such a narrow image of women has been shown to contribute to painfully low self-esteem, a preoccupation with appearance, and full-fledged eating disorders. We know all too well the pressure females feel to achieve the unrealistic weight and shape presented as normal and attainable in media. Academic research shows us these problems aren't just specific to the Lindsay Lohans and Mary-Kate Olsens of the world, either. According to recent studies, 81 percent of all 10-year-old girls are afraid of being fat, and 35 percent of 6- to 12-year-old girls have been on at least one diet. Unfortunately, some of this hyper-awareness of weight and appearance may be passed from mother to daughter, since more than half of adult women surveyed claim their bodies "disgust" them, and 97 percent of women admit to having at least one "I hate my body" moment each day.

Unfortunately, we as Latter-day Saints are not immune to these harmful media messages. Though no religion-specific data exists to show rates of eating disorders or body image issues, numerous accounts from diligent parents, priesthood and auxiliary leaders of struggling girls, and women speak for themselves.

One of Forbes magazine’s annual rankings may indicate that our quest for perfection took a wrong turn somewhere along the way: Salt Lake City, home to the worldwide headquarters of the LDS Church (and where an estimated 50 percent of the population is LDS), was ranked the “Vainest City in the Nation” in 2007 and 2008, and was in the Top 5 in 2009. This ranking is due to the city’s record-breaking amount spent on beauty products and treatments like Botox, an amount that is ten-fold the amount spent in cities of comparable size. If you’ve looked at the billboards along any Utah freeway, you won’t be shocked to hear Salt Lake City has the most plastic surgeons per capita, at six per 100,000 residents, trumping New York City and Los Angeles.

When Thin is Too “In”

In the last 15 years, the media’s depictions of women have compacted into a standard of beauty that is further from reality than ever. Consequently, women’s body hatred has skyrocketed.

When asked their ideal body weight, 75 percent of US women chose a number that was actually 10 percent or more underweight. This is particularly significant considering 67 percent of U.S. women are classified as overweight or obese by the Centers for Disease Control and Prevention. And as obesity doubled in incidence from 1980 to 2004, there was also an incredible rise in eating disorders during the same time period.

Women’s reported bodily “disgust” doesn’t seem so shocking when we consider the dramatic shift in our definition of beauty over the past 60 years. Take the iconic Marilyn Monroe of the 1950s, at 5 feet 5 inches tall and 140 pounds during the height of her fame. Though corseted and exceptionally busty, her figure represents a healthy Body Mass Index (BMI) of 23.3. (BMI is the standard used by the World Health Organization to determine a healthy weight.) Her fuller figure stands in stark contrast to today’s beauty elite, who most often take the form of a rail-thin and surgically enhanced feminine ideal. In recent years, the “Sexiest Woman Alive,” as ranked by men and women alike, is actress Angelina Jolie, at 5 feet 7 inches tall and close to 100 pounds, which equates to a 15.7 BMI.

This is startling, considering a BMI of 18.5 and below is considered “underweight,” a distinction that can result in dire consequences like malnutrition, bone loss, organ failure, infertility, and a severely weakened immune system—none of which we ever hear about in a media industry that represents underweight as normal.

The Lies We Buy

While it would be easier to call this a media conspiracy and pin the blame on a scheming mastermind, the truth is that there is one simple motive behind it all: money. The beauty product and weight loss industries are flourishing at our expense—somewhere to the tune of $117 billion per year.

In one revealing example from the 90s, a prominent women’s magazine featured gray-haired models in a fashion spread. When one of their foremost advertisers, a hair color company, withdrew its entire ad campaign from the magazine upon seeing the un-dyed hair, the magazine was forced to avoid featuring gray-haired women in a positive light in any of its pages. The same pressure exists throughout any media outlet that features advertising for appearance-focused products, and it would be a challenge to find one that doesn’t.

This plan to convince viewers that female worth is dependent upon appearance is incredibly successful. But once we recognize we’re in a battle, we can start to defend ourselves.

The Battle to Take Back Beauty

If you’ve read this far, you’re already equipped with a few self-defense skills. We can start by training ourselves to ask and answer pivotal questions, such as the following, about the media we’re exposed to on a regular basis:

• Who is advertising in these pages or on this screen? (Look for ads, commercials, and product placement that may affect the media content.)

• Do I feel better or worse about myself after viewing this media?

• Is the media I consume promoting real health or unattainable ideals that focus solely on appearance?

• How are women presented in my media choices? Are they valued for their talents and personality? Do they look like me or the women in my life?

• Are my health and weight-loss goals based on concrete measures of fitness or wellness, or are they motivated by a desire to look a certain way or fit into a certain size?

By acknowledging that very few girls and women feel comfortable in their bodies, we can begin to realize it is the standard that needs changing—not us. We should never feel like our bodies are some sort of burden to bear instead of a precious gift we’ve been given!

Learning to recognize and reject the negative ideas so prevalent about women’s bodies is a wonderful step toward being comfortable with our looks and taking better care of ourselves. The ongoing process of redefining what “beauty” and “self-worth” mean ignites a spark of change that can spread to many others within our realm of influence, from a daughter who sees her mother appreciating her body rather than criticizing it, to sisters who forsake worldly judgments and embrace every woman as a friend.

When it is so easy to get caught up in the way we look, sometimes the best way to improve self-esteem is to forget ourselves for a moment. That might involve visiting someone with stories of a time when media consisted of radio melodramas and newspapers, or shoveling the driveway of a friend whose health restricts him or her from being able to do so. Forget about expensive makeup and diet pills—the best way to improve your appearance is to have a little more light in your countenance! Service in any capacity fills us with love and light that radiate from within and draw people near.

Since we’ll see more images of women in one week of media than we’ll ever see face to face, we must regularly give ourselves a reality check by remembering what real beauty looks like. This definition accounts for much more than superficial attractiveness, whether it’s the acknowledgment of an inspired church lesson or a well-played soccer game, a tasty meal or endearing laugh lines on the face of a friend. Though media definitions of beauty aren’t going to loosen up, we know we can reclaim our power by turning away from images that hurt us and looking directly at one another. We can take control every time we turn away from media that causes us to feel sub-par or portrays women as sexual objects instead of thinking, feeling humans, or when we speak out about what we perceive as harmful.

When billions of dollars and countless hours are spent fixing perceived “flaws,” we must recognize that where we spend our time and money reflects our priorities. When appearance is our concern over other things, such as health, cultivating relationships, or developing Christ-like characteristics, we must re-prioritize. When girls and women judge and are judged based on their appearances, we must redefine what we value. If we find media ideals have more influence in our lives than we’d like, we can work to reject those distractions that prevent us from moving on to more uplifting things.

Since these controlling ideals are held in force by silence, with women feeling shamefully alone in their “disgust,” we all need to keep the conversation going. We can constantly point out the unrealistic nature of media images and talk to loved ones about re-thinking beauty. Using these strategies to recognize and reject harmful media messages, we can not only defend ourselves in the battle to define beauty, but we can win the fight for girls and women everywhere.

*Read the full article in the January/February 2011 issue of LDS Living.

Read more perspectives on true beauty in Why I Don't Hide My Freckles Anymore:

We've all heard the old adage "beauty is in the eye of the beholder." But who is the beholder? Women today are bombarded by harmful messages in society about their bodies and appearance. We often feel inadequate and overwhelmed by the impossible-to-achieve ideals touted in the media. And sometimes our harshest critics are the eyes looking back at us in the mirror.

No matter the source, when our image of personal beauty is threatened, it's important to remember who the rightful beholder of true beauty is—is our Heavenly Father. By accepting this and other truths, we are freed to see true beauty in and around us.

The essays in this uplifting compilation, much like their authors, come in every shape and size, but each reaches toward the same conclusion: beauty is truth. And the truth is that everything God created is beautiful, your body included—freckles and all!