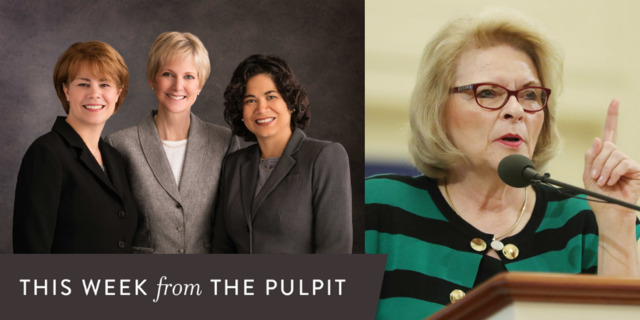 Editor’s note: “This week from the pulpit” highlights recent messages by General Authorities, General Officers, and leaders of the Church.

Leaders of the Church are teaching and ministering to Latter-day Saints all over the world through technology. Perhaps more than ever before in Church history, leaders are joining podcast episodes, participating in virtual devotionals, and testifying of Christ to Latter-day Saints who are thousands of miles away.

No matter the circumstances, Church leaders remain optimistic, enthusiastic, and ever willing to share the message of the restored gospel. This week, as general conference weekend is quickly approaching, our leaders have expressed their love for the Lord’s work and their love for all people. It is our hope that as you prepare for general conference, these messages will reassure you that the Lord is mindful, eager to bless, and compassionate to all.

The Relief Society General Presidency on All In

This week, LDS Living’s All In podcast celebrated its 100th episode. To commemorate this special milestone, the Relief Society General Presidency joined host Morgan Jones for a candid discussion.

President Jean B. Bingham, Sister Sharon Eubank, and Sister Reyna Isabel Aburto shared their experiences from serving as a presidency for the past three and a half years. One of the overarching themes we can recognize from their experiences is their unwavering devotion to Jesus Christ and His gospel.

► You may also like: LDS Living’s ‘All In’ podcast celebrates 100 episodes, 5 million downloads

When asked what it means for her to be all in the gospel of Jesus Christ, Sister Eubank shared her testimony:

“I think about a 14-year-old boy who went into a grove because he had a question. And he emerged with this absolute confidence that Jesus Christ knew who he was and had a work for him to do,” she said.

“And for me, being all in means that I'll take my questions to Jesus Christ. He's the most important source for my questions. And that I have the confidence that He absolutely knows who I am—that He has a work for me to do. Jesus Christ is the biggest, most powerful thing that's ever happened to me. It's His mercy and His love and His patience with me. I just love His gospel, and I love His ways, and I want to tell everyone about this joy. He knows my name. He answers my questions. He forgives my mistakes. He wants my help. And that's what keeps me all in.”

Listen to the full episode in the player below. You can also listen to the episode, read the transcript, and find show notes here.

This week, Sheri Dew, former member of the Relief Society General Presidency who now serves as the executive vice president of Deseret Management Corporation and the CEO of Deseret Book Company, joined the Latter-day Saint Women podcast on an episode called “The Immeasurable Influence of Women of Faith.” In the episode, Dew discusses several topics such as the impact of her grandmother and mother on her life, how she draws strength from the scriptures, and her impressions about Doctrine and Covenants 25. Throughout the episode, she expresses the extraordinary nature and remarkable capacity of women.

► You may also like: Sheri Dew on gratitude and grieving after the loss of her mother

“And one of the things that I have the privilege of seeing in my life from different seasons, from serving as a General Officer, from interviewing and writing about prophets, from traveling with prophets, from fulfilling other kinds of assignments—I’ve seen women in many, many countries, and I’m telling you right now, you could walk to a world map, blindfold me, I could throw a dart, pick wherever it lands, you could get on a plane and fly there, and . . . give me 24 hours in the country, and you could find Latter-day Saint women who can hold their own with anybody, anywhere in the world.

“I think we underappreciate and don’t recognize the remarkable training—if I can call it training—that we get in the Church about leading and about following, about speaking and teaching, about nurturing, about caring, about ministering,” she said.

► You may also like: Watch: Sheri Dew speaks on the Relief Society’s worldwide legacy

Elder Kyle S. McKay, a General Authority Seventy, taught about the reality of the First Vision this week during a Facebook live event. An article from Church News summarizes Elder McKay’s remarks about Joseph Smith’s different accounts and how to approach discrepancies with faith.

In his address, Elder McKay focused on how considering Joseph Smith’s circumstances can provide clarity. Many have wondered why Joseph Smith did not write an account immediately after the First Vision took place. “Your world is not Joseph’s world,” Elder McKay said. “Moreover, his world, his tradition both in his family and for the time, was not one of making a recorded history.”

► You may also like: Of the many truths we learn from the First Vision, this is one of my favorites

Elder McKay then described what prompted Joseph to begin keeping a record. “He wrote nothing historical until the Lord commanded ‘there shall be a record kept among you’ (Doctrine and Covenants 21:1). And even then, it took him two years to start obeying that commandment. Joseph simply did not write. The fairer question would be why didn’t Joseph write about anything? And in context for his time, it becomes clear,” he said. Not only was this not a time of making recorded histories, Elder McKay pointed out that Joseph Smith also lacked writing skills as a young man.

Elder McKay also offered specific insights into the First Vision accounts in 1832, 1835, 1838, and 1842. Read about these insights and more at Church News.

Tara Mickelsen, a member of the Primary General Board, shared insights this week in an article as part of the Church News series “Women of Covenant.” In the article, she discusses truths she discovered as she read about the stripling warriors in the Book of Mormon.

“As I was pondering about the dedication and courage of these young men, it occurred to me that a good number of their mothers raised their sons alone because many of their husbands had been killed by the Lamanites after making a covenant not to fight. I wondered how, despite being alone, these mothers were able to instill in their sons such commitment and trust in God,” she states.

► You may also like: An open letter to 5 types of mothers

She then recognized that these women drew spiritual power from their covenants. “I have come to the conclusion that those mothers drew on guidance from the Holy Ghost—gained from making and keeping covenants—in order to teach their sons, despite many not having a priesthood holder in their homes.”

This year Harriet and I have spent some time organizing old family photos and documents. We have relived the stories of...Posted by Dieter F. Uchtdorf on Monday, September 28, 2020

I love this time of the year when we can already feel the anticipation of general conference coming soon. The words...Posted by Reyna I. Aburto on Sunday, September 27, 2020

So many of you have posted wonderful stories about your Young Women leaders! Now I have to share about my girls’ camp...Posted by Bonnie H. Cordon on Friday, September 25, 2020

One of the fun ways that I have been preparing for #GeneralConference is to look for evidence of Christ in the people...Posted by Bonnie H. Cordon on Wednesday, September 30, 2020

“The Lord loves effort, because effort brings rewards that can’t come without it” (in Joy D. Jones, “An Especially Noble...Posted by Michelle D. Craig on Sunday, September 27, 2020

When I was in sixth grade, my family traveled from Southern California to visit Utah and attend general conference. Back...Posted by Lisa L. Harkness on Wednesday, September 30, 2020