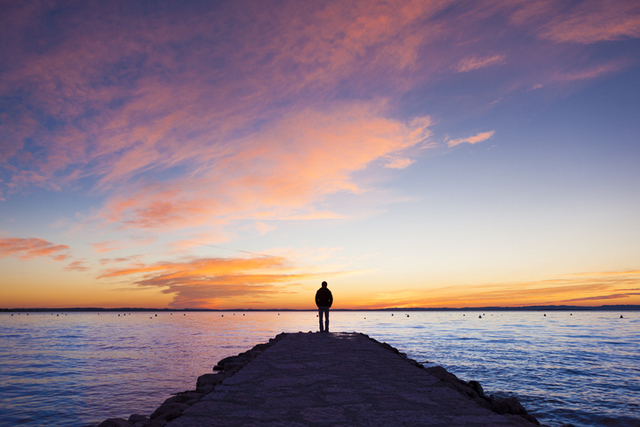 Elder John H. Groberg and his wife, Jean, were the guests on this week's "All In" podcast.

The following is an excerpt from Elder John H. Groberg’s book Fire of Faith, which details his experiences with his family as he served as a mission president in Tonga. During the time of this story, Elder Groberg’s wife, Jean, had returned with their baby boy, John Enoch, to the United States to seek medical care for their sick son. John remained with the rest of the children.

Each evening, after kissing the children goodnight, I walked alone down to a little-used wharf a few blocks from the mission home. I went to the very end of the wharf and stood staring to the Northeast over the vast Pacific Ocean, attempting to reach America. . . .

I was alone yet with my loved ones on those nightly sojourns to the edge of the endless sea that for so many years had physically separated Jean and me both while I was on my first mission and now. Occasionally as I walked to and from the wharf someone would ask if there was anything they could do to help. I would just give a slight shake of my head and the person would fade into the night, not wanting to disturb.

I felt I was gaining spiritual strength every day and becoming more and more certain that the outcome of John E’s situation would be positive. I felt I could deal pretty well with most anything now. But sometimes when we feel we have “weathered the storm” and can “take on the world” we get new surprises. The Lord has a way of keeping us humble.

One particular night I noticed some large shipping containers that had been left near the end of the wharf. As I went beyond the containers to the very end of the wharf I sensed that someone was close by. For the first time in all those weeks, I began to feel a little uneasy.

I decided to leave early. As I started to return home I heard some muffled whispering. Almost immediately a young woman appeared and began talking to me. In effect, she offered her services—a little apologetically, I felt. I shook my head and kept walking. “I won’t charge,” she said, “I just want to help. We’ve been watching and talking about you.” (So there were others!) “I can understand a few weeks, but your wife has been gone almost two months now.”

When she could tell I was leaving she stopped and said quietly, “You must really love your wife.”

For the first time since she started talking I stopped, turned, looked at her, and replied, “I do love my wife. I love her with all my heart.” She stared into space. I saw tears trickle down her face and sensed a slight trembling as she spoke to no one in particular: “Mani, keu amanaki ki ha me’a pehe.” (“Oh, that I could even hope for such a thing.” Or in our vernacular, “How would it be?”)

I felt a sense of sorrow for her. . . . My mind flashed to the Savior talking to the woman at the well, to Mary (out of whom seven devils had been cast), and to the woman taken in sin to whom He said, “Neither do I condemn thee: go, and sin no more” (John 8:11).

I wanted to say more—and maybe I should have. Instead I simply said sincerely, “Thanks for understanding,” and hurriedly walked the last two blocks to the mission home.

As I knelt in prayer that night I expressed more deeply than usual my thanks to God for extra help and protection. Then, almost without thinking, I found myself asking Him to bless that woman and help her to find a better life and help me to not judge others, yet always hold fast to the right.

For the next several days I stayed away from the wharf. . . .

A few days later I found the following unsigned note under my door. “Please don’t stay away from the wharf. No one will ever bother you again. I promise.” I had no idea where it came from, but I felt that whoever wrote it was telling the truth, so I started going to the wharf again. True to whoever’s word it was, I was never bothered again.

As a postscript: While I never learned for sure who wrote the note, an incident happened many years later in Hawaii that shed some light on the mystery. After a conference in Honolulu, an older Tongan man came up to me and said: “You don’t know me but I know you. Years ago I observed you turn down a proposal at a wharf in Nuku‘alofa. Knowing the situation with your wife being gone so long and a beautiful woman being available for free, I couldn’t believe you would just walk away.

“I had been baptized as a youth, but had never really been active. I resolved that evening that there must be something to the Church. It took me several years, as I had many things to overcome, but I want you to know that I am now an active temple-going member and have a son on a mission. Thanks for showing me that we can receive power beyond ourselves.”

I didn’t ask any questions but encouraged him to remain faithful and true to his covenants.

I am convinced that God uses every right thing anyone does to help someone, somewhere, somehow. I thanked God again for His help and protection on that lonely night those many years ago.