When my mission call finally came, I was excited. I found a place where I could be alone and, despite my anticipation, slowly opened the envelope. “Dear Elder Ronald A. Rasband,” I read. “You are hereby called to serve as a missionary for The Church of Jesus Christ of Latter-day Saints. You are assigned to labor in the Eastern States Mission.”

The Eastern States Mission? I quickly scanned the letter for Germany, but it was not there. I had read the words correctly. I would not be going to a foreign country. I would not be learning German. I would not be walking the same streets as my father and brother. I would be serving stateside.

I’m glad family members weren’t there recording the moment on their cell phones to post later on Facebook. (Of course, there were no cell phones or Facebook back then.) I was visibly disappointed and would have had a hard time faking excitement over my mission call. I took the call downstairs to my bedroom, knelt by my bed, and said a prayer. I needed a testimony that I was going to the mission Heavenly Father wanted me to go to. After praying, I randomly opened my scriptures. I wasn’t really searching. I just needed an answer of some kind. As I opened my scriptures, I found myself in section 100 of the Doctrine and Covenants. I began reading the following verses:

“Therefore, I, the Lord, have suffered you to come unto this place; for thus it was expedient in me for the salvation of souls” (D&C 100:3–4).

Immediately, the Holy Ghost confirmed to me that my assigned field of labor was no mistake. I went from being disappointed one minute to having the first of many spiritual impressions I would receive over the years. This strong spiritual impression confirmed to me that the Eastern States Mission was in fact where the Lord wanted me to serve. It was as if Heavenly Father was telling me, “Hey, Germany is not where I’ve called you. You’re going to the ‘eastern land.’ So go there, open your mouth, and I will give you success.” With that single spiritual experience, I changed my whole focus from being disappointed and wanting to be a missionary in Germany to knowing through the Holy Ghost that the Lord wanted me in the Eastern States Mission.

That was a pivotal experience in the building of my own faith—all thanks to the scriptures, the prompting I received to search them, and my mother for teaching me to love them. 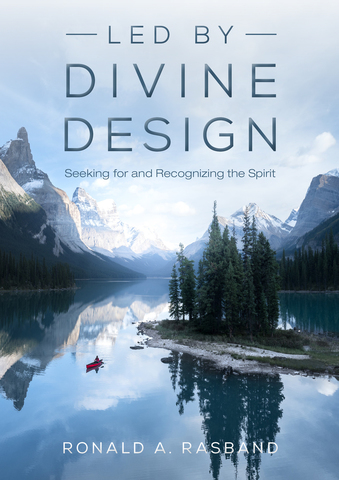 In this beautiful book, Elder Ronald A. Rasband shares timely counsel and personal stories about recognizing the hand of the Lord in our everyday pursuits. Through his own experience, Elder Rasband helps us learn first how to seek the Spirit and then how to recognize and respond to divine guidance in our families, with friends and colleagues, in our Church service, and during times of trial.

Each of heartfelt stories, brief messages, and inspiring quotes is an important reminder that the Lord is in the small details of our lives. Elder Rasband demonstrates repeatedly that we are led according to His divine design. Our Father in Heaven is interested in our success and eternal happiness, and He has provided the Holy Ghost to help us choose wisely so we can return to Him one day.