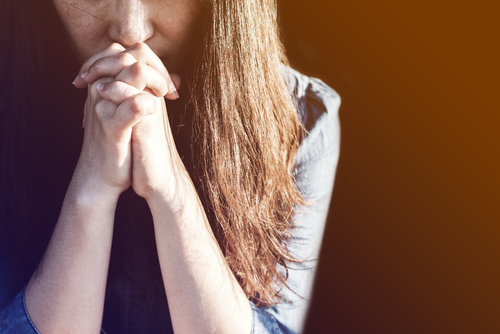 When Faith to Be Healed Doesn't Work: How to Still See God and His Love in Your Life

We are taught from primary that with faith, miracles can happen.

The scriptures are replete with stories of faith bringing about mighty miracles.  Enos was made whole from his faith, as was the woman with the issue of blood.

"True faith brings miracles, visions, dreams, healings, and all the gifts of God that He gives to His Saints" is the promise given to us.

During the routine physical I had in preparation for my mission, my doctor found a lump in my breast big enough to concern him. He asked me to come back the next day for further testing.

I was scared. I talked to my parents about it, and we decided to fast and pray. I knew that God had the power to heal me.

The next day I went in for the ultrasound. The technician looked intently at the images for quite some time before she called the doctor in. He looked at the monitor then did a physical check himself. To his amazement, the lump had disappeared. There was no explanation.

But I had one.

I served a mission, came home, married, and started a family. Then, my second child, Paige, became very sick on her second birthday with the croup. Her body's response to the illness was a terrible breakout of eczema. It covered her forehead, her arms, her feet, her back.

And it never left.

For the first year we had to wrap her hands at night so she wouldn't scratch herself raw when she slept. We tried changing her diet, using medications, feeding her only whole foods, allergy testing, oatmeal baths . . . everything we could think of. Nothing seemed to help.

One day when she was four she came into the house from playing in the backyard. The back of her shirt was covered in blood. I jumped to my feet and asked her what had happened. "My back was itchy, so I scratched on the tree."

I felt sick and heartbroken. Why would this sweet little child have to endure this discomfort and pain for so many years? I wanted her to be healed. I wanted her to have peace. And I wanted peace, too.

Then an idea came to me: I just needed to exercise my faith. I would fast and pray specifically that she would be healed. Why hadn't I thought of this before?!

I was excited that I'd found a way to help my daughter. I had complete faith that God had the power to heal her. He was just waiting for me to ask! I hadn’t felt that optimistic or elated in years.

I set a day to fast and spiritually prepared myself. I would pray fervently until and through that day of fasting, then have my husband give Paige the blessing where she would be healed.

The day came. My faith was strong. I felt the Spirit. I felt peace. I was excited for my daughter, that she would soon find relief. I was relieved this trial would be over.

My husband gave her a blessing that she would find relief and be strengthened, but no specific timeline was given. And that was okay, because I knew it would work. I didn't expect it to disappear during the blessing, but by the next morning, I knew she'd start to look better.

I knew it because it's what I'd prayed for with more energy and faith than I'd prayed for anything in a long while, perhaps in my life. I knew God could do it. And I knew He would.

But, He didn't. The next morning she was still raw.

The next 600 days she woke up raw and itchy.

Somewhere in her sixth year, it began to fade. Somewhat. But it never went away. She is 20 years old now and still has patches of eczema here and there. My daughter wasn’t healed. Or more bluntly stated: The Lord did not heal my daughter.

I was devastated back then. What about faith? What about the promises? Why would He not heal her when He's healed so many others, including me?

It was a difficult time for me. I found myself feeling not only confused and hurt, but embarrassed. I began to second guess my ability to unlock the power of faith and wondered if it was wrong to have even tried. Hoping for miracles these days—was it a silly thing to do? I began to feel like it was.

When my husband was a bishop, a member of our ward fell very ill. His family asked him to come and give him a blessing. They knew he could be healed by the power of the priesthood. But, after the blessing, my husband told me he knew healing wouldn't come. The brother passed away, much to the surprise and devastation of his family.

I knew a woman who was haunted by mental illness. She prayed in faith for relief, but it never came.

Why are there times we pray and fast and seek priesthood blessings in the hope and faith of a certain outcome, and the Lord simply chooses to stay His hand? What does it mean? Is our faith not strong enough? Are we not strong enough?

Why does it seem that sometimes our faith doesn't work?

I echo the words of Elder Donald Hallstrom from the October 2017 session of general conference: "My limited knowledge cannot explain why sometimes there is divine intervention and other times there is not."

I don't know why sometimes God heals and other times He doesn't.

I didn't know why He didn't heal Paige, but I did know Him. I knew that He could if He felt it was the best thing for her not just then but in the eternal scheme of things.

I knew that He loved Paige, and He loved me.

I knew that He saw my hope and faith and efforts and pleading and would bless me how He saw fit.

And I chose to continue to have faith in Him, even if my faith didn't produce the results I wanted.

Because that's not what faith is.

Faith is about opening up ourselves to the results He wants. Not what we want.

That was an eye-opener to me.

In a 2013 CES devotional, Elder David A. Bednar shared a story of a young couple that came to him for a blessing of healing. In talking to them, he felt the impression to ask a question he'd never asked before: "Do you have the faith not to be healed?"

Elder Bednar went on to say, "We recognized a principle that applies to every devoted disciple: strong faith in the Savior is submissively accepting of His will and timing in our lives—even if the outcome is not what we hoped for or wanted. Certainly, John and Heather (the couple he talked to) would desire, yearn, and plead for healing with all of their might, mind, and strength. But more importantly, they would be “willing to submit to all things which the Lord seeth fit to inflict upon [them], even as a child doth submit to his father” (Mosiah 3:19). Indeed, they would be willing to “offer [their] whole souls as an offering unto him” (Omni 1:26) and humbly pray, “Father, if thou be willing, remove this cup from me: nevertheless not my will, but thine, be done” (Luke 22:42).

Did I have the faith for Paige not to be healed?

Yes. It turns out I did. Not by chance, but by choice.

Since then (and even before then) there have been many times I asked for something good in complete faith and I didn't get it. In hindsight, I can see the heavenly wisdom in most of them. Every rejection I gained an opportunity or learned a lesson. With every change I gained growth or a surprise benefit. I can see goodness and blessings from the things I’ve had the faith not get.

The life that I love has come to me through unexpected (and sometimes seemingly unwanted) answers to faith-filled prayers.

But, what about Paige not being healed? What is the blessing there? What good came from it?

Well, that is one of the things I still just don't know. I think I—and she—learned a lot from it. But, perhaps I am still too close to it to see the full purpose of it in hindsight.

I am grateful my faith hasn't worked in the past in the ways I wanted it to. My life would look very different now. And I really love my life.

I wonder, if I received everything I prayed for in faith, if I would begin to feel that it was my faith, not His will, that made things happen.

Perhaps this is one of the reasons we don't get everything we ask for, even in faith. Because it's not our power that makes anything happen. We have no power. We simply turn over our hearts and will to Him so He can release His power in our life. And because it's His power, He uses it how He sees best.

Everything we are given (and often not given) is from Him. Even the unhealing of my daughter.

But, what I did gain from that experience was a more solid testimony of God. It gave me the opportunity to choose to trust Him and continue to believe in Him. I grew stronger and happier.

And Paige made it through. She's tough. She's spiritual. She's amazing.

You know, back then I fasted and prayed that she'd be free from the eczema. But it never occurred to me that it was because of the eczema she'd prayed harder to God for help, or that I kept praying harder to Him as well. We both grew closer to Him and to each other because she wasn't healed physically. We felt Him in our lives, and we felt peace.

So, in the end, I guess He did bless her and me with what I asked for: peace.

Perhaps, then, my faith worked after all.

Michelle Wilson is a wife, mom, best-selling author, and popular Latter-day Saint inspirational speaker. She speaks and writes to women and young women, striving to help them access confidence, peace, and joy as they strengthen themselves and their relationships with God and others. She is the author of A Perfectly Imperfect Mom, The Beautiful Balance: Claiming Personal Control and Giving the Rest to God, and Does This Insecurity Make Me Look Fat?