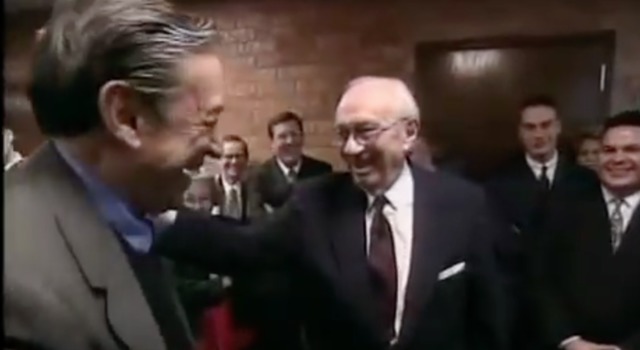 What "60 Minutes" Host Mike Wallace Thought of Gordon B. Hinckley When He Interviewed Him on the Show

He was the first prophet ever to appear on the show, despite numerous attempts to have an LDS leader interviewed by Mike Wallace.

And as the first LDS prophet on the show, President Hinckley's interview would bring Mormonism into the spotlight in a way it never had been before, making a new impression on the world.

"President Hinckley's bespectacled eyes literally twinkled as he good-naturedly allowed that it sounded like an appealing notion," Wallace wrote.

While on the show, President Hinckley tackled questions about multiple topics including the priesthood ban, asserting that "It's behind us."

But another important, practically unprecedented thing President Hinckley did on the show was to assert how mainstream Mormons were despite stereotypes to the contrary.

"We're reaching out across the world. We're not a weird people," Hinckley said during the interview.

And when confronted with the idea that some people think the Church is run by "old men," the then-85-year-old prophet responded, "Isn't it wonderful to have a man of maturity at the head, a man of judgment who isn't blown about by every wind of doctrine?"

"Absolutely, as long as he's not dotty," Wallace said.

"Thank you for the compliment," President Hinckley quipped.

President Hinckley also made a lasting impression with his last exchange with Wallace on the show after talking about heaven and how families can be together forever.

"We know it's there. We have an assurance of that," President Hinckley told Wallace.

"There's a lot of us that don't," Wallace replied.

"Yeah, I know that," President Hinckley said. "But you could."

"I've thought about it. I've not been able to persuade myself," Wallace said.