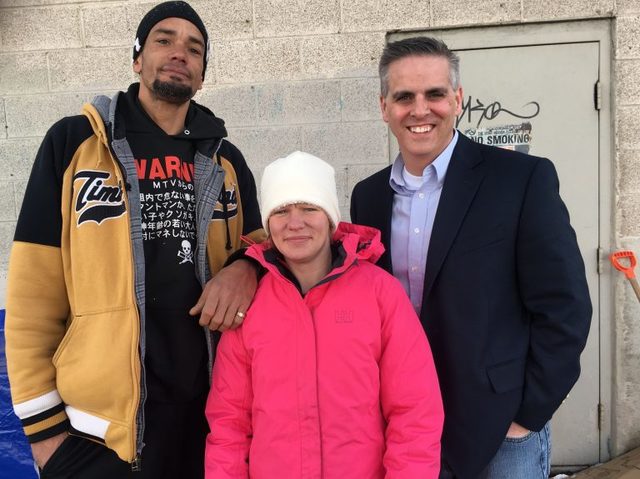 Savage and Jen live in downtown Salt Lake City, Utah. In their early 30s, the couple has a small, humble place to lay their heads, clothes on their backs, and two undersized bikes that carry them from one side of the city to the other.

They also share a rich love, a deep sense of loyalty, and a fierce heroin addiction. And that home? It’s on a sidewalk under a blue tarp not far from Pioneer Park.

On a recent trip to the city, I approached the couple walking away from one of the city’s shelters. After intros and small talk about my work as a writer, I asked if they’d be willing to take a ride with me and share some of their insights and observations on being homeless.

They agreed, and soon we were in my rental car driving a loop around downtown as they pointed out people, places, and problems that are a part of their everyday lives.

It was equally one of the most surprising, unusual, and fulfilling experiences of my career.

Before we’d hit our first red light, I learned the couple has been together and homeless for nearly five years. Despite their circumstances and trials, their love for one another is as sweet and genuine as that of any couple I’ve ever met. Their story of meeting and how Savage courted Jen is right from a Hallmark movie.

The well-spoken Savage — a nickname that has nothing to do with his demeanor — described Jen as the best thing to ever happened to him. As he spoke from the backseat, Jen grinned and glowed up front and I quietly wondered how many couples with homes, jobs, and 401Ks were as tender as these two.

Savage explained the guilt that he cannot provide the life she deserves. “Because this is no place for her. She needs to be in a house. She needs to have kids running around the house screaming and yelling and driving her mad.”

Jen disagrees. “I don’t like him being out here alone, either. I don’t feel it’s fair for me to be in a warm home while he’s out here freezing and doing what he’s got to do for us to survive. We’re a family,” 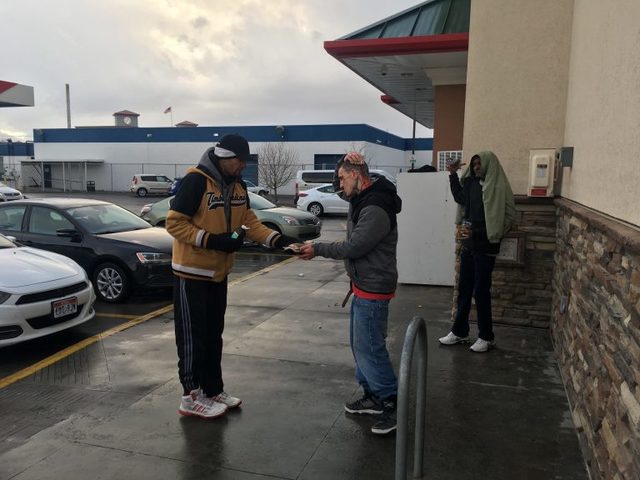 As the city rolled by, Jen and Savage opened up about their heroin addiction that rules the days and ruins the nights. They fully accept that their drug use holds them back, but suggest that they don’t need the unsolicited advice and heartless taunts that fly like rocks from gawkers in the comfort of their cars.

When I pressed them on why they’ve not been successful getting clean, they confessed that the withdrawals are terrifying. “Ours is such a physical thing,” Jen said. “People don’t understand. They look at heroin addicts as just junkies … you know … but they don’t know the in-depth of … we want to quit. We don’t want to be doing what we’re doing. However it’s just such a physical thing that the pain and the hurt and … the things you have to go through to get clean and get off what you’re doing is hard.”

Both make no excuses and recognize that trying to get clean on the streets, surrounded everyday by the demons who hold the keys, is a near-impossibility. Their goal is to walk through the door, hand in hand, of a well-known local rehab program.

As we looped back toward their makeshift tent, Savage discussed his work history and education. He’s just five credits from a degree in Applied Science and Architectural Technology. “I want to finish,” he said with conviction. “I want to provide.”

I couldn’t let the moment pass, and I marveled aloud at how much good the couple could do in the world. But I also told them what they already know: they must get clean to make a difference and find their potential.

When I asked what else they’d want people to know about the homeless community, Savage spoke of a judgement epidemic and then paraphrased a scripture. “Let ye without sin cast the first stone. Well guess what? I will never throw a stone in my life. I will never judge anybody.”

Soon we were sitting in front of their home. It’s a tiny space barely big enough for two adults, but I sense it holds more love than many houses 100 times larger.

As we said goodbye, the couple didn’t ask for money, food, or praise. They only asked for understanding, patience and prayers from those who cannot comprehend the struggles and fears of addicts on the streets. More than anything, they want people to have faith they really can change, get clean, find a home and create a new life.

They want us to root for their success, not cheer their failures.

Later that day, through a remarkable coincidence, I saw Savage and Jen again in a downtown gas station parking lot. As we spoke, a man staggered up to us, his head, face and arms covered in blood. He’d been pistol whipped in a car and was holding a massive gash on his shaved head.

Others walked by, pretending not to notice. But Savage saw him, and he kept his promise about judging others and began tending to the stranger’s wound.

When we said goodbye a second time, I begged them again to make the changes in their lives that will empower them to help even more people.

Then, even more importantly, I promised to make some changes of my own.