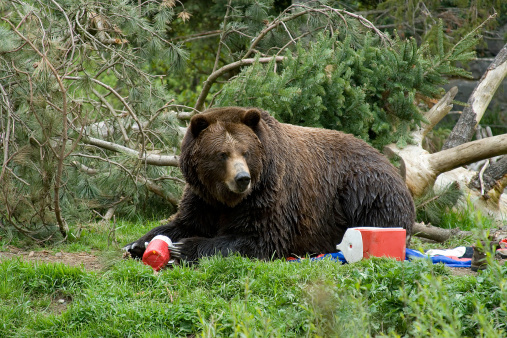 When a Bear Crept Into Gordon B. Hinckley's Camp, Licked His Brother's Face

Summertime and camping are pretty much synonymous with each other. There's just nothing like taking off into the great outdoors, roasting marshmallows, and looking up at the starry sky on a summer night.

But there's always a danger to consider when heading off into remote places: the wildlife. And this is a danger President Gordon B. Hinckley and his family knew all too well.

Six-year-old Gordon and his four-and-a-half-year-old brother, Sherman, were asleep in the seats of their dad’s Model T Ford. That much was not unusual. They were used to sleeping under the stars at their summer farmhouse in the country. But this time they were on a family vacation. Their parents had decided to go to Yellowstone Park with their brand-new car during the summer of 1916.

Pulling off to the side of the road, they set up camp. Sometime in the night a big bear came out of the forest and began sniffing all around the car. The noise of its claws scratching as it tried to stand up against the car woke up their father in the tent nearby. When he saw the bear, he immediately lit a fire to scare it away. Before the bear left, it had been close enough to the sleeping boys in the car to lick little brother Sherman’s forehead!

For more interesting stories from the Prophets' childhoods in Boys Who Became Prophets.

Featuring 15 childhood biographies from Joseph Smith to Gordon B. Hinckley, Boys Who Became Prophets gives us a peek into the early lives of these spiritual giants.