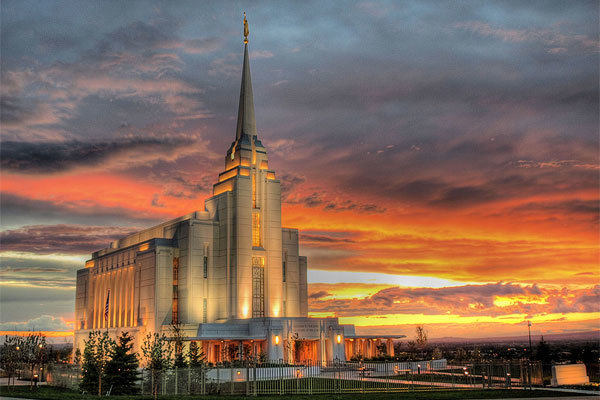 Have you ever been too tired to do something you know you really should do? Have you ever brushed off a prompting because it didn't make sense or it didn't fit into your day?  Sometimes those promptings are to bring someone cookies or send them a text or actually call them on the phone. Sometimes they are to read a certain talk from a Church leader or a particular passage of scripture. Most of those things we can squeeze into our schedule – especially if the cookies are store-bought.

But, sometimes there is a larger time commitment. Sometimes we get a prompting to go to the temple and sometimes it is direction to go spontaneously. That can be difficult. It will certainly take hours. It can be difficult to make time for the Lord and attending His house but it is always worth it. (By no means does that mean that I follow through on the prompting to attend the temple every time I receive it. Why do you think I’m writing this? I need to learn a lesson here.)

Years ago, before I had any family obligations and my schedule felt much more open to spontaneous inspiration, I used to carry a change of clothes in my car just in case I decided to drop by the temple. One day, I was headed home from work and had the prompting that I needed to go to the temple right then. I adjusted my route and headed to the temple. (Can’t you hear the spiritual GPS : “Recalculating. New destination is ‘Inspiration’.”)

I was excited. I thought, “That was a pretty clear prompting. This must be important. I wonder what I’ll get to learn!” As the only member of the Church in my family, I’d been struggling a bit with feeling alone in the gospel. I’d hoped that maybe I would learn something about that. I decided to do an endowment session. Throughout the session, I was just waiting for a constant stream of inspiration, but nothing profound was coming.

As it was winding down I felt a little disappointed. Then I stood for the final part of the ordinance. As I said the last sentence of the ordinance, the Holy Ghost washed over me and I was overcome as I realized the blessings the Lord gives to us in His Holy house include a promise that we never need feel lonely.

As we leave the temple, we are given power and the glory of God and angels have charge over us (D&C 109:22). Who doesn’t need more power, glory, and angels these days? I had a bishop that taught that if anyone is going to sign up to be an angel to help you, that it likely will be someone connected to you – family members on the other side of the veil. Those angels were further proof that I was not, and will not, be alone in the gospel of Jesus Christ.

An Example from Nephi

In 1 Nephi 17, Lehi’s family has arrived in Bountiful. They had suffered so many afflictions that “we cannot write them all” and they “exceedingly rejoiced” to arrive at the seashore with its fruit and wild honey (verses 5-6). It seems they are going to take a moment to regroup before starting on the next leg of their journey. After they had been there for some time, Nephi says, “the voice of the Lord came unto me, saying:  Arise, and get thee into the mountain. And it came to pass that I arose and went up into the mountain, and cried unto the Lord” (verse 7). In many instances, “going up into the mountain” has been equated with going to the temple. So, Nephi gets a prompting to go to the temple and he goes. Granted, it doesn’t seem this is Nephi’s busiest day – they aren’t actively traveling and, with all that fruit and honey around, hunting for food may not be as much of a priority as earlier.

(Speaking of, have you noticed that it was just the previous chapter where Nephi’s bow broke and they were suffering with great hunger and then, just turn the page and they are in a land with so much food that they call it Bountiful? The Lord delivers us from our afflictions. However, I don’t know if Nephi’s family would appreciate the idea of “just turn the page.” As in all trials, the deliverance comes in the time of the Lord, not ours. Most of the time, it would be nice if all we had to do was turn a page but that isn’t often the case.) Okay, sorry for the tangent. Back to the temple.

Nephi receives the prompting to go to the mountain. I think of it as the Holy Ghost saying, “Hey, Nephi, we’ve got something we need to tell you but here isn’t the right place. Come on up to the mountain and we’ll talk there.” Nephi follows the prompting and is blessed with much knowledge and inspiration. He is commanded to build a ship and taught how to do so (verses 8-11). He is promised to be guided and directed by the Lord and he’s told that when he arrives in the promised land that he will know it was the Lord that brought him there (verses 13-14).