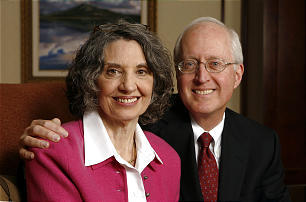 The pain began mysteriously and almost imperceptibly at first, remembered Elder Larry Y. Wilson. Within a few months he was lying in bed without so much as the strength to read a book.

Though his wife, Lynda, didn't believe his condition would prove fatal, Elder Wilson wasn't so sure, and began preparing for the worst.

"Life came to a screeching halt," he said. "I saw many doctors but none could give a diagnosis. They knew it was an auto-immune disease, but had no idea if it was curable, chronic or fatal."