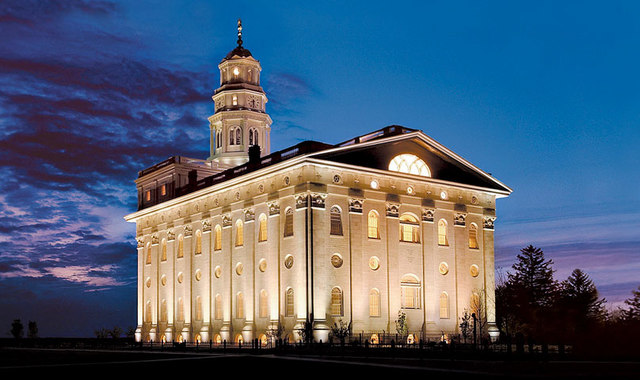 When the Kirtland and Nauvoo Temples Were Engulfed in Spiritual Fire

There have been some claims over the years of temples that appear to be engulfed in "spiritual fire."

Most of these claims have been debunked as anything from air coming out of ventilation shafts or, sadly, actual fires.

However, there have been a few documented cases where people saw the temple surrounded by what appeared to be heavenly light or flame—as it was in these two instances.

Months before and months after its initial dedication on March 27, 1836, the Kirtland Temple was the site of many divine manifestations. In fact, "more Latter-day Saints beheld visions and witnessed other unusual spiritual manifestations than during any other era in the history of the Church," according to the Church History In The Fulness Of Times Student Manual.

Before its dedication on January 21, the "heavens were opened" to Joseph Smith when he met in the temple with the first presidency and others and he saw and understood "all who have died without a knowledge of this gospel, who would have received it if they had been permitted to tarry, shall be heirs of the celestial kingdom of God” (D&C 137:7).

Others reported seeing angels in at least 10 different meetings leading up to the dedication, according to Church History In The Fulness Of Times Student Manual, and at five of those meetings, some said they even saw Jesus Christ.

All of these events culminated at the public dedication, where, according to history.lds.org, Orson Pratt recorded:

"God was there [in the Kirtland Temple], his angels were there, the Holy Ghost was in the midst of the people . . . and they were filled from the crown of their heads to the soles of their feet with the power and inspiration of the Holy Ghost, and uttered forth prophecies in the midst of that congregation, which have been fulfilling from that day to the present time" (Deseret News, Jan. 12, 1876, 788).

For those who weren't in the temple at the time of dedication, the event was no less spiritually spectacular. According to history.lds.org, Joseph Smith recorded the following:

"George A. Smith arose and began to prophesy, when a noise was heard like the sound of a rushing mighty wind, which filled the Temple, and all the congregation simultaneously arose, being moved upon by an invisible power; many began to speak in tongues and prophesy; others saw glorious visions; and I beheld the Temple was filled with angels, which fact I declared to the congregation. The people of the neighborhood came running together (hearing an unusual sound within, and seeing a bright light like a pillar of fire resting upon the Temple), and were astonished at what was taking place" (History of the Church, 2:428).

Though this was an instance where a light so intense looked like a pillar of fire resting on the outside of the temple, there was another time where a spiritual fire appeared to be engulfing a temple.

During the four years it took to complete the Nauvoo temple, there's one night that stands out as one of the most spiritual moments of its construction.

On the night of March 15, 1846, a man by the name of Chester Loveland was woken by his mother-in-law raising the alarm that the temple was on fire.

It's important to note that just over a month before, the Nauvoo Temple roof had actually caught fire from an overheated stove pipe, and so there probably was a double sense of alarm to see flames devouring the temple once again.

Loveland dressed quickly and ran outside to see that the temple was again ablaze. However, "He studied it for a few seconds and realized the flames were not consuming the temple. He also didn’t see anyone else running to the rescue and concluded it was the glory of God. He returned to bed" (David R. Crockett, The Nauvoo Temple: “A Monument of the Saints”, pg. 11–12).

And Loveland and his mother-in-law were not the only ones to notice the flames surrounding the temple.

According to The Nauvoo Temple: “A Monument of the Saints,” another man saw the belfry appear to be on fire at around 9:45 p.m., but when he reached the temple, it was unharmed, dark, and secure.

The same night of these sightings, a small group of members was gathered inside the temple for a sacrament meeting that lasted until midnight. According to The Nauvoo Temple: “A Monument of the Saints,” they were "overcome with the Spirit" and many spoke in tongues, prophesied, saw visions, and two heavenly beings were reported being seen in the corner of the room.

Though the Nauvoo Temple later did catch fire after the Saints left Nauvoo, that spiritual night of divine manifestations was one that would be treasured by many.

And though the Kirtland Temple was also left behind as the Church experienced severe persecutions, both of these temples have a sacredness and legacy that are evident in the blessings and spiritual manifestations that occurred in the days the Saints worked to build them.