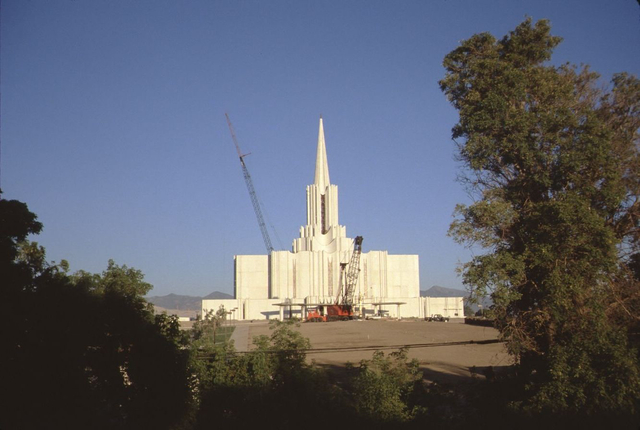 Kim Burgon recalls the highlight of a family trip to Disneyland in 1959 when he was just 8 years old, and it wasn’t the rides. It was a time-lapse video of Disneyland’s Main Street, U.S.A., being constructed. The time-lapse concept fascinated Burgon, who was already interested in buildings and architecture. That little-known Walt Disney movie would become the inspiration for a video Burgon would make nearly 20 years later of the Jordan River Temple being constructed—a video that is being shown at the Jordan River Temple open house for the first time in several decades. But this impressive, historic film did not come about without its share of miracles, testimony, and work.

See a sneak peek of the time-lapse at the end of this story!

The story really starts, Burgon explains, with his passion for building. His grandmother owned an old family home in South Jordan that was vacant and ready to be torn down, but Burgon, who was married, working part-time as a self-employed draftsman, and going to school fulltime, thought it would be fun to restore it. “[My grandmother] got really excited about it. In late 1977, she was working on her estate and she said, ‘If Kim is willing to try and save the house, I would like him to do that,’” Burgon remembers.

After jumping through a lot of hoops and finally obtaining a loan, Kim and his wife, Sandi, were able to buy the house on February 5, 1978. 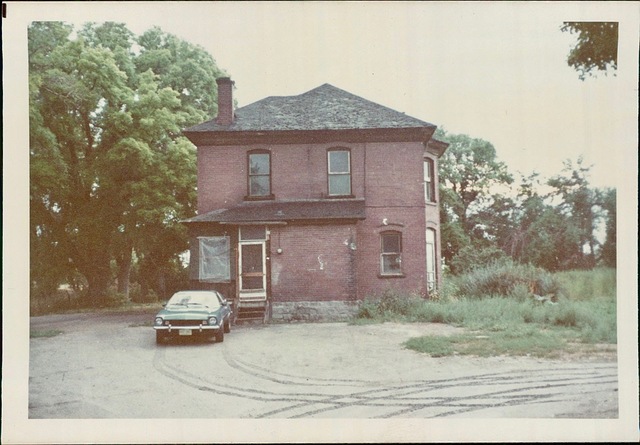 Two days before they closed on the loan, however, they were met with a startling announcement. “Sandi and I were [at the house] just ripping stuff up and throwing things out the window, when my uncle came to the door,” Burgon recalls. “He said, ‘Did you hear what President Kimball just announced?'

It was then that Burgon’s uncle told the couple that President Kimball had announced that a temple would be built in South Jordan. Burgon replied, “Well, I don’t know where they’re going to build it, but they ought to build it on the top of that hill across the street.” When his uncle smiled and told him that was the plan, Burgon and his wife were shocked, especially considering all the empty space that surrounded them in what was then a very rural community. “Here we were, two young parents,” Burgon says. “We had a little baby, I really wasn’t employed, was graduating, and getting my MBA at the University of Utah. And in our own little way now, we’re going to be the neighbors to a temple. Our whole world changed that day.”

Almost as soon as they heard the announcement, Kim and Sandi went to their would-be living room. As they looked through their big front window, the house was too surrounded by trees and weeds to see much. But when they looked out the second story window of what was to be their daughter’s room, they were excited to see that her window afforded a perfect, dead-center view of the hill across the street. There was only one tree directly in the way—a “sacrificial tree” as Burgon jokingly describes it. 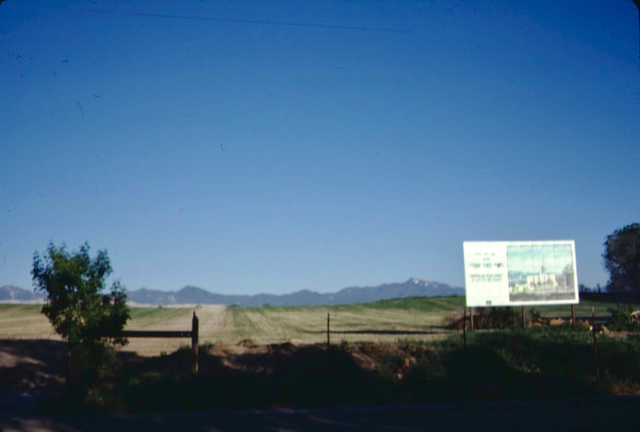 It was then that Kim had the idea to make a time-lapse movie of the Jordan River Temple’s construction. Sandi was completely on board, but there were a few other obstacles. Burgon explains, “Our big problem was time-lapse photography in 1978 was difficult and expensive.” Determined to find a way, Burgon reached out to his former mission president’s brother-in-law, Dale Inkley, whom Burgon knew quite well. Inkley, of what used to be a well-known photography company in Utah, Inkley’s, told Burgon that there was no way for him to affordably make a time-lapse movie. After reaching out to a few other avenues, it seemed that the idea would have to be set aside. That’s when Inkley called.

“[Dale] called me just as they were starting to work on the [temple] site,” Burgon recalls. “He says, ‘They just made available a super 8mm movie camera. It has time-lapse capability. It will shoot one frame a minute and also one every 15 seconds. If you want one, I’ll get you one.’”

Burgon, who by that time had graduated, immediately bought the camera, which he and Sandi bolted onto the window frame of their daughter’s bedroom. Burgon says, “My wife would turn [the camera] on every weekday morning and then turn it off every afternoon, once the sun got too far west, because it became too bright and difficult to photograph. Sandi became chief camera caretaker. She ran that camera for two and a half years—it was shooting one frame every minute. We ended up with about 50 super 8mm rolls of film.”

Once he had the footage, the next step for Burgon was to make it into a viewable home movie. At Inkley’s suggestion, Burgon hired Steven Aubrey, a film editor, to assist him to turn their two years of footage into a 20-minute presentation in 1982. At that point, Burgon thought the film had reached its end result. That was, until two years later when he got a call from Steven Aubrey, who had begun working in the Church’s temple department. Aubrey told Burgon, “Kim, there’s a rumor around here that someone made a time-lapse movie of the temple. I’ve told them I know who he is and I helped him do it.” Aubrey asked Burgon if they could turn the 20-minute movie into a 5 ½ minute film to show at a temple president’s seminar. Burgon agreed.

The film was shown and Burgon was given a VHS copy of the shortened version, complete with music. Through a series of events during this time, however, the original 20-minute video was lost, leaving Burgon with only a VHS with copyrighted music, which he rarely watched and which was relatively forgotten for the next 30 years. 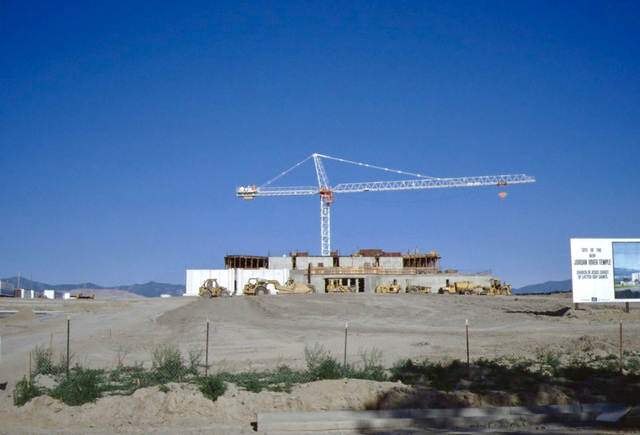 When the announcement came that the Jordan River Temple was ready to be rededicated after extensive renovations, the film that had fallen into obscurity started being whispered about again by those who remembered it. Eventually, some of those in charge of the open house approached Burgon and asked to use the film during the temple celebration and in the open house tent, to which Burgon readily agreed. He shares that recent modifications were made to his 5-minute VHS tape, taking the short 5-minute version and turning it into an even shorter 90-second version that people could stop and watch in the open house tent.

And while that 90-second movie has been seen by hundreds already at the Jordan River Temple open house, it’s not the only contribution Burgon has been able to make to preserve the history of this iconic temple. He shares, “About a year ago, we donated the original copy that Steven Aubrey made of all of the rolls of film. We donated that to the Church History Library—it is about an hour and a half long.” He adds, “It’s amazing what happened. There’s no way on earth a person would normally be going to school without a steady job and be able buy a house, then graduate in May of 1978, right as they started working on the temple. We had a job, a camera, and it all just came together. It was kind of cool.”

A Testimony of Temples

From the time it was announced to the time of its rededication, the temple has been a central part of the Burgon family’s life, and Burgons hope that the movie will help others see the beauty and peace of this House of God.

“Back [in 1978], there were no fences, no anything. South Jordan was out in the country. So we would walk up on the temple site almost every night. I mean, we were down in the basement, all over it. . . It was totally different than it is now. When they did the current renovation across the street, I didn’t even get across that fence once in two years.” Burgon continues, “It was fun for us to watch and film the temple, but what’s really more amazing is what the temple did to us.” As Kim and Sandi started attending the temple weekly, it had set an example for their daughter when she turned 12. And although most youth could only go occasionally with a group recommend and their ward, the temple president and bishop worked together to allow Sandi and her daughters to regularly do baptisms for the dead together.

In addition, Burgon remembers another change that increased their appreciation of the temple—when the street in front of their house was widened and all of their trees were removed. “I used to tell people that our family lives in the shadow of the temple, because when the sun would go down, the shadow would always cover our house. But now, with these new LED lights, I can honestly say that we live in its light. It is amazingly bright, both spiritually and physically. It literally means everything to us.” It is a message he hopes anyone who sees the time-lapse will remember for their own lives as well. “Time-lapse photography has the ability to convey that little, consistent steps over time allow great things to happen, be it building a temple or your family or yourself or the Church. To me, a time-lapse allows you to watch two years of steps you’d never really see or notice as it happens. But when you collapse it all down—and I think that’s kind of like what our lives are going to be like. We may all watch a time-lapse movie of our lives and our families and go, ‘Whoa!’ I hope it gives people an opportunity to realize that when working together in Church or as a family—it may take some time, but it gets done, and it’s pretty neat when it does.”

Check out a sneak peek of the Burgons’ time-lapse by pushing play below, or head to the Jordan River Temple open house in the upcoming weeks to watch it yourself after the temple tour. Find tickets on lds.org.

Have you been to the Jordan River Temple open house yet? Don't miss the awesome (not to mention historically significant) time-lapse video of its original construction playing in the open house tent! Follow LDS Living for the story behind its creation. Photography © 2018 Kim Burgon