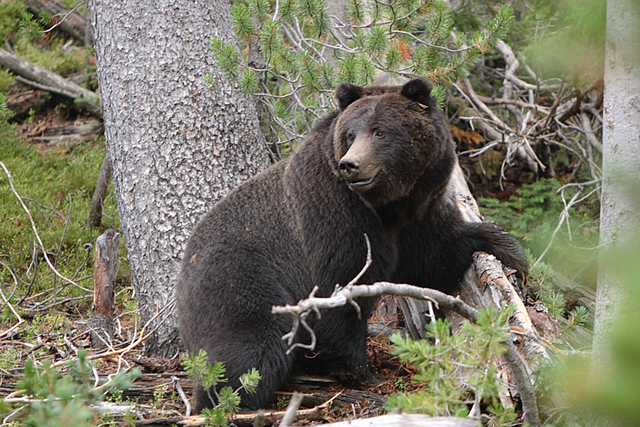 While Being Stalked by a Bear, How One Man's Desperate Prayer Was Answered

I was sixteen years of age when my father, my older brother, and I traveled to Yellowstone Park to see its sights for the first time. We camped for the night in a tent at Fishing Bridge, near the Yellowstone River. We had taken some fishing gear and were going to rise early to fish at the side of the river.

About 4:30 a.m., the alarm went off, but my father and brother were too tired to get up, even with repeated efforts to awaken them. So I decided to go on my own. I grabbed my pole and fishing gear and headed down a trail towards the river. By this time, daylight was just beginning to break through the trees in the forest, but it was still somewhat dark

Soon a series of booming sounds echoed through the forest. The sound reminded me of a woodsman cutting down a tree with a long-handled axe. But this sound kept growing louder and louder until I realized that, whatever it was, it was getting closer and closer to me!

As I turned in the direction of the sound I saw a huge bear heading straight toward me. The sound was its enormous paws hitting the forest floor—“Boom . . . Boom . . . BOOM . . . BOOM!”

I turned and walked away from the bear. It followed me. I tried to change directions, to hide, to dodge around trees—but it kept right after me. The thought of climbing a tree crossed my mind, but I was not sure the bear would give me time to do so. I became less and less hopeful of evading him in the forest. After all, this was the bear’s territory—not mine. I began calling out for help. While trying to evade the bear, I knocked and shook the doors of parked campers, but they were all locked. All the while, the bear kept coming.

Finally, in desperation I decided to pray. Normally, I would find a secluded place and kneel down where I could concentrate on my communion with the Lord. But to keep moving seemed a wiser decision. I prayed with all my heart as I stumbled through the forest, the bear in hot pursuit. “Dear Father, what should I do? Please show me NOW!”

Immediately a scene came into my mind—an animal trainer at a circus I had seen. I asked myself, “When the bears or big cats became unruly, what did the trainer do?” I remembered that the trainer would aim something directly at the eyes of the animal, and it would back off.

But what did I have to ward off this big bear? My fishing pole!

I stopped abruptly, spun around 180 degrees, and faced the bear with the fishing pole pointed right at its snout. It stopped, weaving its head back and forth, seemingly bewildered by my action. The bear backed off and began to retreat from me—then wheeled around and again came toward me.

I held my position, extending the fishing pole in the direction of its eyes. My arm was shaking so badly the fishing pole could have appeared to be anything to the bear. Finally, that powerful bundle of muscle and fur stopped, turned, and headed back into the forest.

Suddenly, I could hear the opening of camper doors (that had before been locked) and people calling out, “Was that a bear?” “Are you all right?”

The next morning I told the park ranger about my experience. He told me I was very fortunate—that only a few months before, a man had been killed by a bear under almost identical circumstances.

I thanked the Lord for answering my prayer on the run.

Mormon Life Prayers MiraclesPrayers,Miracles,Mormon Life
Comments and feedback can be sent to feedback@ldsliving.com