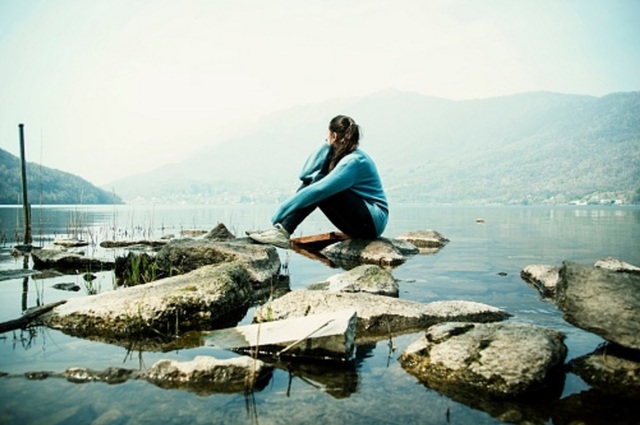 While My Husband Was Hospitalized, the Heartbreakingly Beautiful Lesson I Learned from One Word Sung in Church

This story was originally published on contemplatingcancer.com and has been republished with permission.

When my husband and I started dating, we often went to church together. I was a starry-eyed 18-year-old ready to take on the world, and Ken was just returning to college after spending two years as a missionary. We were both enthusiastic about life and eager to make friends.

We were sitting together in the middle of church one day when Ken leaned over and whispered, “Look around. Everyone here is going to sing about me now.”

Confused, I asked him what in the world he was talking about.

He grabbed a hymnbook and opened to the song that we were preparing to sing. He proudly declared, “My name is in the song. It’s in a bunch of the songs. Is your name in any of the songs?” I looked at him skeptically and shook my head.

Everyone was beginning to sing, so we stopped talking. We finished the first verse and nothing happened. I’m not sure what I expected, but he made me think some dramatic stunt was coming. The second verse started.

"We now repent of all our sin

Ken jabbed me in the side with his elbow right as we sang the second half of the word, “bro-ken.”

I smiled, rolled my eyes, and finished singing the song.

Over the years, Ken continued to nudge or prod me every time we sang the word “bro-ken” in church. By the time we were married, I learned to brace myself or block him before his teasing elbow came. Even after our son was born, he would at minimum give an eyebrow raise as he rocked the baby or fumbled through the diaper bag. It became a silly tradition and a constant through the changes of our lives.

Learning a Deeper Meaning of Broken

When Ken was diagnosed with cancer, my son and I usually went to church by ourselves. Ken was frequently too sick, in the hospital, or advised to avoid public places. I continued to go to church when I could. I missed being with Ken but was grateful for the spiritual enlightenment.

One exhausting and emotional Sunday, I sat in church feeling very alone. The families around me seemed whole and happy, and I felt my spirits crumbling. I quietly sang along with the congregation.

"While of this bro-ken bread

I felt angry and hurt. Where was my husband? He was supposed to be sitting next to me, elbowing me in the side, not stuck in the hospital waiting for a blood transfusion. Was this a foreshadowing to what my future would look like? Was he going to die and leave me as a suffering and lonely single mother, sitting without him every Sunday in church? Would I ever again feel that teasing elbow in my side? Life was so unfair, and my heart hurt so much.

"Bruised, bro-ken, torn for us

Thy suffering borne for us

Lives with us still."

This time I listened to the words. Bro-ken. It occurred to me why that word is in so many of the songs. It’s not to randomly insert my husband’s name throughout the hymnbook. Its meaning is significant.

Broken. We are all broken. Our lives are broken, our hearts are broken, and at times even our families feel broken. Ken wasn’t with me in church that day, and I felt broken.

But the word shows up for another reason too.

Broken. Christ was bruised, broken, and torn for us. He endured all the suffering of the world. He faced everything that we have ever experienced, and more than we can ever imagine. He was broken for us so that we could be healed and made whole again.

All of Us Are in the Hymnbook

Bro-ken. Ken was right that his name is in the hymnbook, but he was wrong in thinking that the rest of our names aren’t. We all can find ourselves in that word, “broken.” Because we are all broken. We hurt and suffer because of our own choices, the choices of others, and sometimes, just because the world is a broken place.

We should also look for ourselves in the word, “broken” when it refers to Christ and the Atonement. Because we can find ourselves there too. Jesus Christ suffered for each and every one of us, on an individual level. He thought of me and my lonely days in church, wondering if my husband would survive cancer. He thought of Ken, lying in a hospital bed, hoping that his immune system would recover enough to go home. And he thought of you, dealing with whatever heartache and brokenness you are facing right now.

He was broken for me.

He was broken for you.

He can mend our brokenness.

With tears running down my face, I took a piece of sacrament bread and smiled. Ken is broken and I am broken, but so was our Savior. His body was broken so that no matter what happens in this life, we can be healed.

Julieann Selden is a chemistry graduate student and non-profit volunteer. Her husband, Ken, is recently in remission from sarcoma cancer. Since his diagnosis, they have become passionate about promoting awareness and support for others with overwhelming life trials. On her blog, contemplatingcancer.com, she examines the thoughts and emotions of life through the lens of an aggressive cancer diagnosis. Julieann and Ken have one son, who regularly saves the world from villains in his backyard.