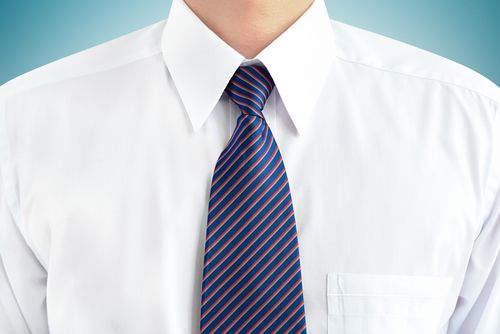 White Dress Shirts: What the Church Has Actually Said

Among Latter-day Saint men, there seems to be an obsession with white dress shirts. Not only does every elder in the mission field sport a white shirt but so does each member of the First Presidency, Quorum of Twelve, and other auxiliary Church leadership. This begs the question: is the wearing of a white dress shirt an official standard of the Church, or is it merely an element of Mormon culture? Here’s what we know.

To members of the Church, white has become almost inextricably linked with the concept of purity and goodness. And this association has extended to the clothes we wear. A few general authorities have commented on this connection.

“We are not a people who look to formality, . . . but I do think that the Lord will be pleased with a bishopric if they will instruct the young men who are invited to administer the sacrament to dress properly. He will not be displeased if they come with a white shirt instead of a colored one. . . . When they are all in white I think it contributes to the sacredness of it [the sacrament].”

“May I suggest that wherever possible a white shirt be worn by the deacons, teachers, and priests who handle the sacrament. For sacred ordinances in the Church we often use ceremonial clothing, and a white shirt could be seen as a gentle reminder of the white clothing you wore in the baptismal font and in anticipation of the white shirt you will soon wear into the temple and onto your missions” (“This Do in Remembrance of Me”).

The conference talks from these two general authorities suggest that young men of the Church wear white as a way of signifying the sacredness of ordinances—in this case, the sacrament.

► You'll also like: When Your Child Doesn't Fit the Mormon Mold

Though the wearing of white is encouraged while handling the sacrament, it is not required. In the same 1956 address by President McKay, he expressed the desire that those who do not have a white shirt will still “come with clean hands, and especially with a pure heart. . . . Anything that will make the young boys feel that they have been called to officiate in the Priesthood in one of the most sacred ordinances in the Church” (emphasis added).

Likewise, Elder Holland said that the admonition to wear white was “not intended to be pharisaic or formalistic. We do not want deacons or priests in uniforms or unduly concerned about anything but the purity of their lives.”

Handbook 2: Administering the Church gives the official policy on wearing white shirts for handling the sacrament. It says:

“Ties and white shirts are recommended because they add to the dignity of the ordinance. However, they should not be required as a mandatory prerequisite for a priesthood holder to participate.”

Though white may be preferable for passing and handling the sacrament, there aren’t any official Church policies or standards that require men in general to wear white shirts on Sundays, thus leaving it open for individuals to decide for themselves, through the direction of the Spirit, what they believe is appropriate. But how can we decide what is appropriate?

What Should I Wear?

In For the Strength of Youth (a great resource for members of all ages), it says to “show respect for the Lord and yourself by dressing appropriately for Church meetings and activities.”

Supporting that statement, Elder Robert D. Hales encouraged that we remember that “Sunday best” means our best attire. Dressing appropriately is a way of showing respect for the Lord and ourselves. He said, “When we go to church, . . . it is important that we dress to demonstrate that we are prepared to worship and to indicate that we are mentally and spiritually ready to invite the Spirit to be with us always” (“Modesty,” Ensign, August 2008 ).

These statements give the why of dressing nicely for church, but they don’t necessarily give us the how. While there may not be specific guidelines on what to wear, there are some on what not to wear.

Don’t dress sloppily or overly casual. In the modesty chapter of True to the Faith it says, “In dress, grooming, and manners, always be neat and clean, never sloppy or inappropriately casual.” According to Elder D. Todd Christofferson, “Casual or sloppy dress and grooming at sacred times and places mocks the sacredness of the Lord’s house and what is taking place” (“A Sense of the Sacred,” BYU devotional, November 2004 ).

Do not dress in wild or provocative styles. While serving as a bishop Elder Hales observed, “I could not understand the rationale of youth who dressed in wild colors and provocative fashions to show their ‘in your face’ independence from modest, conservative dress codes and traditions” (“Modesty”).

It is up to each individual to interpret these guidelines. One member may feel that a colored or patterned shirt fits well within the bounds of modesty, while another may think that a white shirt represents his best dress. Whatever people decide, that decision is up to them and not to the other members of the congregation.

► You'll also like: Beards: Yes or No for LDS Men?

So What Can I Wear, Really?

Clothing is a way for people to express themselves, to show a little of who they are on the inside—on the outside. And statements from our Church leaders have left room for individuality and agency regarding what members wear to church. What their guidelines suggest isn’t a particular color or style but a reevaluation of why we wear what we wear.

Elder Hales has proposed that before we leave for Church, we take a moment to evaluate what we are wearing:

“What happens in your home as you are preparing to come to church? Is there a moment before you leave your home when you pause to look at yourself in a mirror or have a member of the family observe how you look?” (“Modesty”).

As you observe your own outfit choices, here are some questions to ask yourself:

Whether you prefer white shirts, colored shirts, or patterned shirts, the important thing to remember is that “even as we teach and exemplify modesty, we never condemn. . . . Always we exemplify compassion and Christlike love for the individual while we remain loyal to the standards that the Lord has set” (Carol F. McConkie, “Courage to Choose Modesty,” Ensign, October 2014).

► You'll also like: 9 Insane (but Fabulous) Knots for Your Man’s Tie